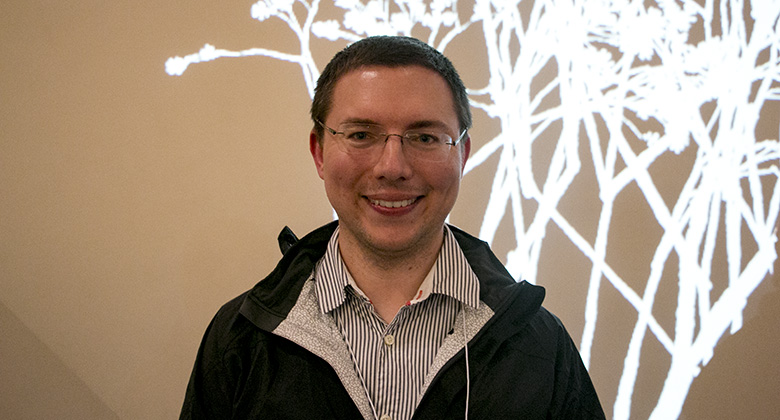 When the Society for Vertebrate Paleontology came to Salt Lake City in October 2016, we got a chance to speak with some noted paleontologists about their work. Here's our chat with Dan Ksepka, Curator of Science at the Bruce Museum in Greenwich, CT.

NHMU: What do you think is the most exciting thing going on in paleontology today?

Ksepka: One of the biggest developments in the last few years is that molecular and morphological data sets are finally coming together. I grew up academically in an era where they'd often be at loggerheads. We might have had molecular trees with dates that made no sense based on the fossil record, they'd seem to be far too old, or morphological trees that really clashed with evidence that we were seeing from genes. Now, there have been a lot of methodological developments where we can combine these two types of data and get the whole picture.

So putting all of the branches on the evolutionary tree — the living branches and the dead branches — and getting an idea of when different groups evolved, where they originated, and seeing some of the really strange side branches that kind of went on their own evolutionary journey — in some cases, a very successful one, but ultimately left no descendants. For instance, in my group, penguins, we see giant penguins, we see spear-beaked penguins, we see penguins with grey and red feathers, and so we see all these wonderful forms we couldn't imagine if we only had living species and molecular data to deal with.

On the flip side of the coin, having that molecular data gives us a good framework for putting all of the branches in place and also helps us infer when different events took place where we might have fossils to study. And we're seeing that with mammals, turtles, insects, and many other groups.

NHMU: What's one highlight of your career you can share with us?

Ksepka: I'd have to say one highlight in terms of sheer excitement was working on the largest flying bird that ever lived. This was a species called Pelegornis sandersi. It was discovered hilariously at an airport in Charleston, South Carolina. While they were expanding the airport they found these fossil bones, and the people who were doing the work called the museum and they were collected.

I had the privilege of studying them a couple of years ago — we put the skeleton back together and then did a lot of work looking at modern birds for how long the feathers would have been because that is of course an important part of the wing beyond the skeleton. Then, basically I got to test fly the thing, so we did some analyses looking at how fast it would go, what would be its optimal speed for the most efficient glide ratio, and whether or not it could take off from the ground on its own power.

It was extremely interesting for me to work on. I had become completely immersed in it, reading all these books and sitting in front of the computer all day, and then I never could have predicted how interested non-paleontologists would be. So normally I write papers for other paleontologists and molecular biologists and taxonomists and this time I think we had 3,000 news stories on it. They animated it for a movie on National Geographic, the Wall Street Journal was interviewing us on video, and just countless little articles and things like that. We now have a model of it hanging in the entryway to our museum.

Yeah, that was fun - it was an experience.