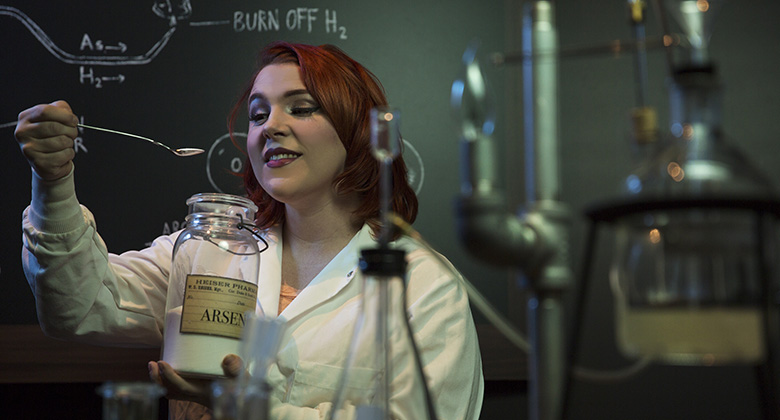 An actor demonstrating some of the more exciting properties of arsenic in the museum theater production Poison Live! © NHMU.

The Power of Poison special exhibit is a fun and engaging way to spend several hours no matter how you slice it. But two live performances written and produced by our museum staff put the experience over the top. Poison Live! is a 12-minute theatrical and multimedia show that tells a dramatic story about the beginnings of toxicology. The Extreme Plants Traveling Sideshow is a two-actor romp in the soaring Canyon room, complete with multiple costume changes, a musical number, and plenty of humor.
NHMU has been slowly building its museum theater chops since 2007, learning more with every performance. Ten years of experience has led to two engaging and well-acted poison-themed shows. When you consider the lure of giant dinosaurs around the corner, keeping an audience engaged is no small feat. Actor portraying “The Painted Lady” in Extreme Plants Traveling Sideshow. Photo by BJ Nicholls.
“With an entire building full of interesting things, actors need some tricks to keep audiences engaged,” explains Paulmichael Maxfield, the NHMU Public Programs Coordinator and the brains behind all of the museum theater productions happening at NHMU. “Everything you do has to be new, every minute, like asking the audience questions, having them do something for you, even just moving around the room.”
Maxfield was trained by the University of Utah Actor Training Program, and when reflecting on the unique ambiance of a museum, he muses, “it’s more like street performing than traditional theater.” To meet this challenge, Maxfield develops scripts that accomplish the mission of sharing educational material but also allow for a high degree of improvisation to best match each audience’s age group, level of enthusiasm, and amount of participation.
Poison Live! is a highly scripted, 12-minute, single-actor dramatic performance deep in the Power of Poison special exhibit space (see schedule of performances). The show uses a colorful multimedia presentation to help deliver the sense of kinetic energy that keeps the audience sitting on the edge of their wooden  lab benches. The actor also has some latitude to use age appropriate terminology, pauses, jokes and physical movement as well. I found that the 19th-century murder mystery story was exciting enough to keep kids from squirming out of their seats when exploring the science content, and the historical tidbits kept the adults equally interested. Actor Mark Macey performing with multimedia projections in Poison Live! Photo by BJ Nicholls.
Extreme Plants Traveling Sideshow is another beast altogether. Maxfield’s comparison with street performance is especially apt here as two performers shout, laugh, brag, cry, cringe, sing, tussle, and hug their way through 15 highly enjoyable minutes. The throwback to a traveling sideshow barker’s wagon serves as perhaps the most cute, compact changing room and audio-visual nerve center I’ve ever seen.
This is no accident. Maxfield is a very good writer  for the stage, but he doesn’t let it stop there. He explains that many rounds of editing the script with the actors and then testing it in front of live audiences were the keys to its success. “It was a very collaborative editing process,” he testifies. “We had two weeks where we were doing a lot of tweaking – performing in front of audiences, noting when they laughed , when they didn’t, when the props were distracting, and much more.” Actors portraying “The Toxic Twins” in Extreme Plants Traveling Sideshow. Photo by BJ Nicholls.
Learning how to balance educational content with entertainment is at the heart  of this type of performance. The two University of Utah student actors I spoke with after one of the performances said this was perhaps the most challenging aspect of the show. They love entertaining, but recognize the importance of teaching the audience a few things.
The script had its beginnings, after all, in a biologist’s grant for public education. Dr. Phyllis Coley , Distinguished Professor of Biology at the University of Utah, has been studying how tropical plants defend themselves from herbivores for 35 years. Dr. Coley’s amazing career includes over 100 scientific publications, a Fellow position in the American Academy of Arts and Science, the Utah Governor’s Award for Science, and a deep understanding of the mechanisms of plant defenses. Her recent National Science Foundation grant provided funds for developing public outreach education, and the Extreme Plants Traveling Sideshow is the creative culmination of this grant.
"Scientific research is fascinating and important for our society, but scientists often don’t explain their work in ways that engage the public," stresses Coley. "Collaborating with Maxfield was a wonderfully rewarding experience, making us distill our research findings down to key discoveries, and figuring out how to make it fun to learn about them."
When I saw Extreme Plants, I was struck by how well the performers pulled me into their funny story, much like I was watching from the padded seats of a traditional theater. Yet the immediate and endlessly fascinating explorations within the museum were just steps away.
I began to understand that this is the added layer of importance behind museum theater: it exemplifies how the museum is a place to be surprised by the many ways you can be engaged in science. In other words, yes, you can be entertained, but in a way that asks you to use your brain. A Samuel Beckett play can be a cerebral experience, but in a distanced way. Costumed performers at Disney World can be highly entertaining, but that’s about it. Extreme Plants finds a sweet spot where we can enter a fanciful world without forgetting that we’re at the museum to learn some cool stuff. It’s a great introduction to the importance of museum theater, not to be missed (see show schedule).

A peek at one of my favorite moments from the Extreme Plants Traveling Sideshow: the Painted Lady’s song, borrowing a tune from Chicago the Musical.

Michael Mozdy is a Digital Science Writer for The Natural History Museum of Utah, a part of the University of Utah in Salt Lake City. Our mission is to illuminate the natural world and the place of humans within it. In addition to housing outstanding exhibits for the public, NHMU is a research museum. Learn more.
Blog Author:
Michael Mozdy
Category: Natural History, People, Spaces