Bitten by the Adventure Bug On a Dino Dig 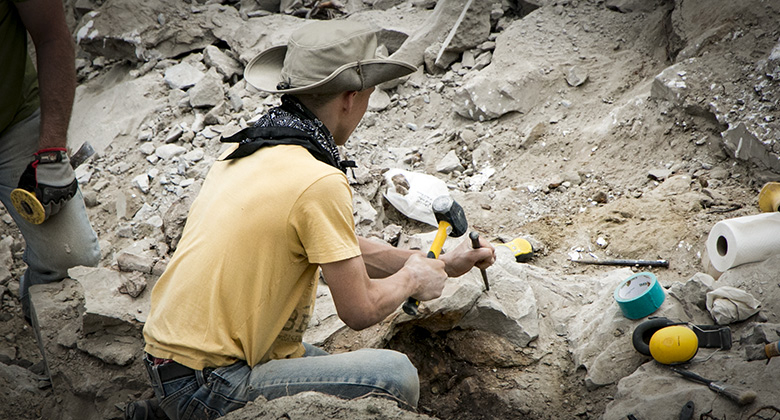 Photos and story by Michael Mozdy

It was about the time that my wife licked a fossil that I started to understand why paleontologists are so wild about digs. We were hiking through the rugged Grand Staircase-Escalante National Monument landscape with our guide, NHMU Paleontology Collections Manager, Carrie Levitt-Bussian, and her dog, Phytosaurus. I knew southern Utah was fairly famous for dinosaurs, but not until Carrie told us that fossils were everywhere did it sink in. Carrie stopped, bent down, and picked up what seemed to be another ubiquitous rock. “Here’s one,” she said casually, turning it over. “Lick it.”
My wife, to my utter surprise, did.
“It sticks!” she laughed, confirming what Carrie had told us: since fossil bones are porous, your tongue slightly sticks to their surface, the sensation like licking light sandpaper.
“Occasionally, you might see a group of us crouched in a quarry, licking rocks like idiots.” The thought of that sight makes me laugh every time. It’s also a great image for the mania that may infect you if you go on a dig. Like Yukon Cornelius throwing his pick axe in the air and licking it after it lands, you might find that the earth can yield amazing surprises in unexpected places.
When we first saw the quarry the paleontology team was excavating, it seemed small in the wide landscape, perched on a hillside. As we explored the site and learned that every inch might yield a new piece of bone, the quarry began to loom as big as an unexplored country. A good excavation takes time – indeed, this was the third season excavating the 10-foot x 15-foot quarry we stood in. The methodical nature of this dig had yielded some great results. We gazed upon several complete leg bones of what seemed to be a Gryposaurus monumentensis - a duck-billed dinosaur - as we were told by our seasoned paleontologists. These bones were massive. Here’s a picture with NHMU’s six-foot Fossil Preparator and Preparation Lab Manager, Tylor Birthisel, for some perspective. “They’re the cows of the Cretaceous,” explained Carrie, referring to how common they were, “but it’s still pretty cool to see these bones so intact.” Indeed it was.
A man sat chatting with Tylor, who was leading this dig, and the several students and one volunteer in the quarry. This visitor was Harold “Scott” Richardson, a seasonal BLM employee who during the summer lives by himself in this incredibly remote part of Utah. After impishly encouraging Tylor to look for the skull (the dig had been hard and long, more on that later), Scott turned his attention to us and gave us a crash course in Utah geology.
According to Scott, this part of Grand Staircase has exposed a geological layer known as the Kaiparowits Formation, deposited between 76.5 and 74.7 million years ago in the Late Cretaceous Period. “It would have been like central Louisiana is today,” he explained, “big, slow moving rivers, ponds, humid, full of plants and animals.” The silt and mud deposited by the water were crucial for forming fossils. If left out in the elements to decay, bones simply turn to dust and are gone. But if they get lots of sediment deposited on them relatively quickly, they can perserve. With the right combination of pressure, chemical reactions, and time, some of these preserved bones then stand a chance of fossilizing.
Scott would know: ten years ago he was volunteering at minimum 500 hours a year in this area and discovered the only two specimens of a new species of ceratopsid dinosaur, Kosmoceratops richardsoni. Two skulls, too (sorry, Tylor).
It turns out that this quarry had been particularly difficult to excavate, with the fossils encapsulated in sandstone the consistency of concrete. We learned that paleontologists sometimes need to use power tools to get through this type of rock (See pictures in Power Tools of the Trade: Paleontology). Paleo digs are not all about the big guns, though. Most of the time we were there, the paleontologists meticulously removed stone around fossils, being careful not to harm them. They use a variety of tools to do this – read Inside a Paleontologist’s Field Kit to learn more.
The quarry yielded rib bones, vertebrae, tendons, claws, and while we were there, a seasoned volunteer even uncovered some fossilized skin impressions. My brain was swimming with the possibilities of what might lie behind the next rock, and I fought the urge to encourage Tylor to dig just a bit further to find a skull. Dinosaur skin impression
It’s important to note that the person who found the skin impression wasn’t looking for it. He was clearing out rock around some vertebrae and noticed it out of the corner of his eye. There’s so much to be found in the quarry (and in Grand Staircase-Escalante), that paleontologists have to make constant decisions about what to prioritize. I found some excellent leaf impressions and lots of petrified wood, but in the context of uncovering this Gryposaurus, plants were simply part of the sandstone layer we were removing. Fossilized leaves from the Cretaceous
Noting my angst over leaving behind 64 million-year-old plant specimens, Carrie did assure me that if we found a whole, large leaf impression, she’d take it back to the museum for me. It does highlight that paleontologists, like all researchers, have research goals in mind. Some paleontologists are hounds for Triassic period fossils while others are hot on the trail for the Cretaceous. And this forces choices to be made.
Experts in all professions incur choices. But while painters can paint over and adjust 20 times with nothing but canvas and paint being wasted, and software developers can code, test, and recode with nothing but time and megabytes at stake, paleontologists have the weight of millions of years being chipped away with each chisel stroke. Every trench dug runs the risk of destroying something infinitely valuable in our understanding of our planet. It hits home the gravity of the profession and the importance that the work is done carefully and methodically, with experts at the helm.
By the time our day ended, all too quickly, I was a bit overwhelmed with the wealth and adventure hiding in the ground all around us, as well as how much of a rookie I was. My wife and I had caught the bug, and were already wondering when we could come back to dig some more.
We walked back to our vehicles. The sun comfortably reclined in the sky. When we reached camp, we had plenty of time for dinner and tales of giant fossils and the people who found them. NHMU thanks the Bureau of Land Management for permitting and funding of this project.
The NHMU Paleontology Department recruits dedicated volunteers for field work annually, typically in January and February. If you're interested, check here during those months.
Michael Mozdy is a Digital Science Writer for The Natural History Museum of Utah, a part of the University of Utah in Salt Lake City. Our mission is to illuminate the natural world and the place of humans within it. In addition to housing outstanding exhibits for the public, NHMU is a research museum. Learn more.
Blog Author:
Michael Mozdy
Category: Natural History, Research
Tags: paleontology