Living Rock from the Great Salt Lake, Now in our Permanent Exhibits 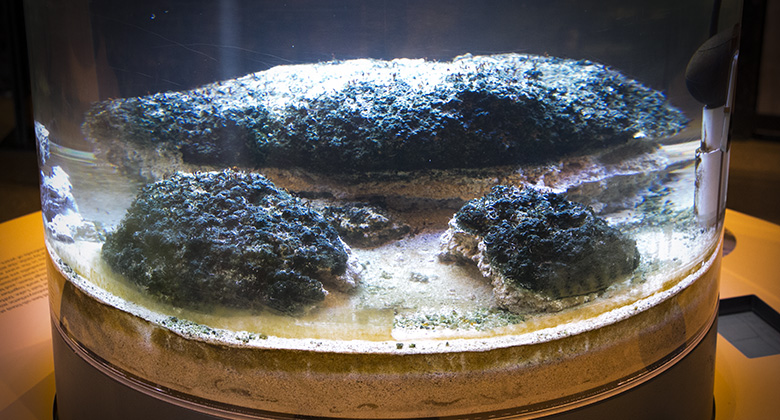 In June of 2016, we added a new, living exhibit in the Great Salt Lake Gallery on the third floor of the museum. At first glance, the three stone-looking bumps in a tank aren’t as impressive as the Cretaceous monsters looming in the background. But their humble appearance masks what might be the most awesome creature on display: these lumpy guys are one of the oldest forms of life on Earth.
They are microbialites, a living rock. They start as squishy mats of photosynthetic microbes and cyanobacteria, trapping sediment and binding it to their mat. They are also able to create calcium carbonate from the minerals in the lake – the same material seashells are made of – and add it to their home. Over hundreds of years, microbialites grow layer by layer. The topmost layer is the active one, where microbes, cyanobacteria, algae, and brine fly larvae live.
In honor of their mat-like existence, the largest of the microbialites in the NHMU exhibit has been named “Matt.” To learn about and collect these specimens, we partnered with Bonnie Baxter and Jaimi Butler at Westminster College’s Great Salt Lake Institute, Melody Lindsay, a Ph.D. student from Montana State University, and Michael Vanden Berg with Utah Geological Survey. They study these forms of life and showed us the incredible abundance of microbialites living in the Great Salt Lake. The microbialites range from a few inches across to the behemoth Vanden Berg found that is ten feet in diameter.
Part of our exhibit shows a drone fly-over of part of the Great Salt Lake where microbialites are abundant, and it’s a breathtaking display of life in a landscape that is generally considered lifeless.
“There are thousands of them – maybe tens of thousands,” explains Will Black, supervisor for Exhibit Services at NHMU. This is quite rare – the Great Salt Lake is one of the few places on Earth where microbialites still thrive. Because it is super salty and there aren’t many competitors or predators, they are able to live out their long life cycles.
Their presence in the Great Salt Lake is all the more stunning because they represent some of the earliest forms of life. Fossilized microbialites have been dated to 3.4 billion years ago. They once dominated the Earth’s shallow seas, and many think that we owe our oxygen-rich atmosphere to their photosynthetic activity. In fact, scientists from NASA study microbialites as examples of potential life on other planets. The exhibit compares a cross-section of modern and a fossilized microbialite.
Black and his colleagues in the NHMU Exhibits Shop created a special circular tank as a new home for our microbialites. They placed a special UV light on top that is used for coral reef tanks in order to promote the growth of the microbes. The water and sand is straight from the Great Salt Lake, so that these guys get to truly live in their home environment.
One of the more interesting parts of the exhibit is the dissolved oxygen meter, which provides an hourly breakdown of the oxygen being produced. This proves that the rock is living – you can see that the activity is lower at night when the lights are off and no photosynthesis is happening.
The microbialites are thriving. The color of their surfaces is a nice dark green, and the brine fly larvae are multiplying like… well, like happy brine fly larvae! The brine fly larvae and shrimp love to eat the algae and other microbes on the microbialites. They exist in a kind of balance: when there’s a lot of green growth, brine fly larvae thrive and eat it back, and then the brine flies mature and fly off and the microbialites get a chance to grow back.
To maintain the tank, the exhibits team has to top off the water now and then due to evaporation and keep the tank clean. There’s a magnetic algae vacuum to clean the sides of the tank weekly. Once a year, they plan to do a thorough cleaning of the sand and bring in a new batch of water from the Great Salt Lake.
On your next visit, be sure to stop in at the Great Salt Lake Gallery to check out Matt and his two little buddies.
Many thanks to Melody Lindsay, Bonnie Baxter, Jaimi Butler, and Michael Vanden Berg.
Michael Mozdy is a Digital Science Writer for The Natural History Museum of Utah, a part of the University of Utah in Salt Lake City. Our mission is to illuminate the natural world and the place of humans within it. In addition to housing outstanding exhibits for the public, NHMU is a research museum. Learn more.
Blog Author:
Michael Mozdy
Category: Spaces