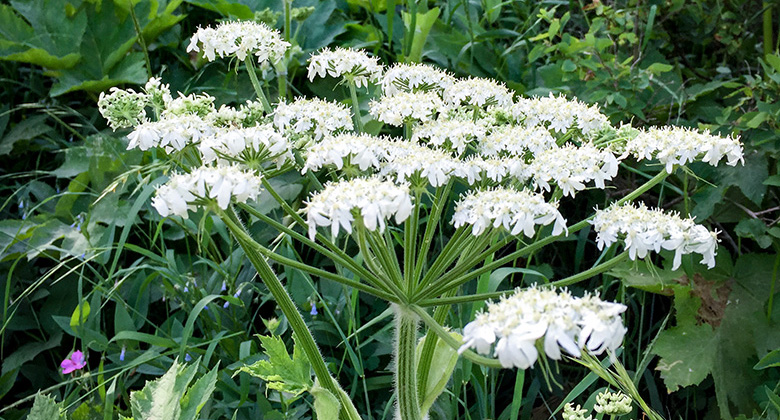 Like many in Utah, my wife and I love to hike in the Cottonwood Canyons, and every summer we see a progression of flowering plants. This year, I thought I’d consult our NHMU experts to learn a bit more about them and hopefully clear up some mis-identifications we’ve been carrying around from our younger years spent in other states.
Last weekend, for instance, as we hiked on the Mill D trail in Big Cottonwood Canyon, we came across a stand of white flowers I’ve seen on many July hikes. It scents the trail with something close to a musky celery scent, and seems to like aspen groves where water and sun are abundant. Hairy green stalks emerge from clusters of bright green leaves that look like huge open hands with serrated edges. The most showy part of the plant, however, is the big head of lacy white flowers. Many flower clusters actually radiate from the central stem on their own mini-stems. If you’re a gardener and you’ve seen carrots, dill, or parsnip go to flower, this is a strong suggestion that it’s part of the carrot family, Apiaceae. Flowering cow-parsnip from Big Cottonwood Canyon, July 2016. Photo: Michael Mozdy
While I moved in to sniff the flowers to see if they had more scent, my wife shouted, “I think that’s the plant that gave me a horrible sun rash 10 years ago in Oregon!” She backed away instinctively with memories of that painful, week-long rash.
Knowing that these were so common, and not hearing much about rashes from my mountain biking and hiking friends, I thought we’d better investigate.
I sent my pictures to Elizabeth Johnson, the NHMU Collections Manager of the Garrett Herbarium. “From what I can see in the picture,” writes Johnson, “it looks like Heracleum maximum (synonymous with H. lanatum) or common cow-parsnip. It's in the Apiaceae or carrot family.” Next, Elizabeth let me see the Garrett Herbarium collection of cow-parsnip specimens. What a great collection! As soon as we opened up the door to the cabinet containing Apiaceae specimens including the Heracleum maximum, a spicy, herbaceous, celery-like scent filled the aisle. Even dried for decades (or more than a century in some cases), these guys pack an olfactory punch! NHMU has 30 specimens from Utah alone, dating back to 1880. Clearly, cow-parsnip has been a part of our environment for a long time. Below is a particularly photogenic herbarium sheet from 1888 (for more information on herbarium sheets, read Decoding a Herbarium Sheet). © NHMU
So what we’ve been seeing for years here in Utah was cow parsnip, but will that produce a rash when mixed with sunlight? It turns out that the stem and leaves of cow parsnip do contain phytochemicals called furanocoumarins. They can cause a skin rash and burn-like blisters when exposed to the sun. This is called phytophotodermatitis. It has also been seen when weed whackers are used to clear weeds, and parts of the plant are sent flying in all directions (including on the person holding the weed whacker). Generally, stories of skin problems when coming into contact with cow parsnip don’t seem too severe, however.
Interestingly, cow parsnip is also edible. You can find many stories on the internet of foragers who harvest young shoots and leaves from cow parsnip and enjoy the taste. (Take these stories as you take anything else you find on the web.)
Some researchers warn strongly against foraging and eating cow parsnip, partly because of the potential exposure to furanocoumarins, and partly because they resemble some of the more toxic plants we know. The closest look-alike dangerous cousin is also a member of the carrot family and is called giant hogweed, or Heracleum mantegazzianum. This guy is a toxic, invasive species from Asia, and has been found in Massachusetts, New York, Pennsylvania, Oregon, and Washington state. It is essentially like cow parsnip on steroids – it’s huge – 8 to 20 feet tall – looks very much like a big version of cow parsnip, and the furanocoumarins it contains in its sap are especially toxic. Giant hogweed causes severe photodermatitis, where your skin turns red and itchy, and then blisters form within 48 hours and can last for weeks. The sap can also cause temporary or even permanent blindness if you get it in your eyes! This was what my wife encountered in Oregon. Another look at the cow-parsnip in Big Cottonwood Canyon, July 2016. Photo: Michael Mozdy
Apiaceae contains a few other dangerous look-alikes to mention: Queen Anne’s Lace is smaller (2-4 ft. tall) and has fern-like leaves, and can cause a skin reaction that is aggravated by the sun. Poison hemlock (the famed drink used by Socrates to commit suicide) can be found across the northern U.S. and has the small white flowers, although not quite in the same circular cluster, and has fern-like leaves. Water hemlock has similar white flowers, grows in wet meadows and along streams in the western U.S., but has very different, arrow-shaped leaves. These last two are no joke, and even just a little bit of these plants will flat-out kill a person.
The Wild Garden: Hansen’s Northwest Native Plant Database has put together a nice page with side-by-side comparisons of these plants to help you identify them.
The moral of the story: know your lacy, white flowers! And, in general, they’re better when appreciated from a distance.
Michael Mozdy is a Digital Science Writer for The Natural History Museum of Utah, a part of the University of Utah in Salt Lake City. Our mission is to illuminate the natural world and the place of humans within it. In addition to housing outstanding exhibits for the public, NHMU is a research museum. Learn more.
Blog Author:
Michael Mozdy
Category: Natural History
Tags: botany