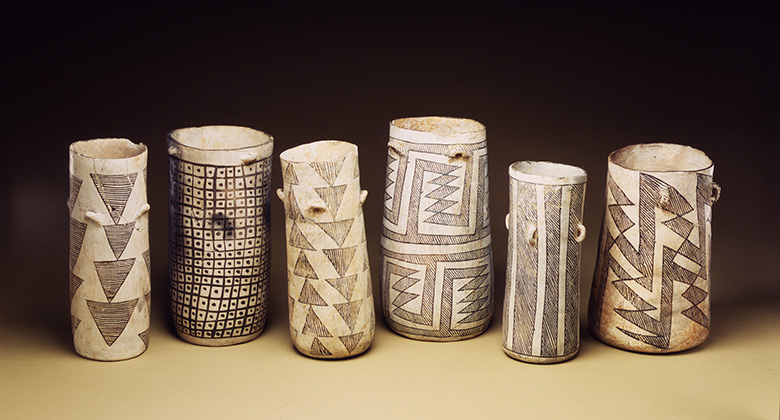 In 2003, a researcher from the University of New Mexico named Patricia Crown began studying a cache of 181 cylindrical vessels found in Chaco Canyon (now Chaco Culture National Historic Park in New Mexico). Shaped like tall water glasses, at least twice as high as they were wide, these vessels were used by the Ancestral Puebloans (also known as the Anasazi) around 1000 – 1125 A.D. Interestingly, the vast majority of them were found stacked together in just a few rooms by the archaeologists who excavated Chaco Canyon in the late 1890s. No one knew for sure what the vessels were used for. Chaco Canyon, Chaco Culture National Historic Park, New Mexico. Photo: Dot Nielsen / Flickr.
Crown thought that they looked very similar to Mayan vessels dating to 900 A.D. In fact, she noticed little bits of plaster on the outside of the Chaco vessels and tiny scratch marks on the outside, almost as if they had been scrubbed repeatedly. Crown discovered that the Maya used plaster on the outside of their vessels and put bright pigments on them. They did this to decorate the vessels, presumably for an important ritual use. In the American southwest and in parts of Mexico, the geology of the area dictates that pottery can only be made in a limited range of colors: oranges and browns with white and black colors for decoration when firing. The colors ritually important to the Maya like turquoise, blues and greens had to be applied in other ways, and this plaster-and-pigment solution was an ingenious way to provide some temporary color. Image #K12465, AMNH Library. "Jars from Great Pueblo, Chaco Canyon, New Mexico"
What Crown found on the Chaco cylindrical vessels supported the theory that they were treated similarly to the Mayan ones. So she asked a Mayan specialist what the Mayan vessels were used for and the answer was drinking cacao. In fact, vessels had been found with writing on them that said they were used for drinking cacao! Jeffrey Hurst, a researcher from the Hershey Institute in Pennsylvania, had also done residue analysis on some of the Mayan vessels and found the chemical markers specific to cacao: a big spike of theobromine and a smaller spike of caffeine.
Of course, Crown thought that since the unique shape was very similar to the Maya ones and the outside of the vessels showed evidence of pigment decoration, then perhaps the use was the same. She wanted to test the Chaco vessels, but the test used by Hurst actually destroys a little piece of the pottery about the size of a dime. In this test, the outside of the piece is burred off so that only the interior, any remaining organic residues, and some of the pottery wall are pulverized and tested. A chromatograph of the compounds found tells researchers what molecules are present. The Chaco vessels were all owned by the American Museum of Natural History, and Crown did not want to ask to damage any of the museum pieces. Incredible photo from the original excavation of Chaco Canyon in 1896. Archaeologists found a mound of cylindrical vessels at one end of room 28, and excavated many layers of the vessels (181 in total) from the site.
Image #411886, AMNH Library. "Vessels in room 28, first layer in west end, Pueblo Bonito, New Mexico, 1896"
Instead, Crown was able to help re-excavate a deep trench in a Chaco Canyon trash mound, and was thrilled to find over 200,000 objects, including many pottery sherds. She was able to identify which pieces of pottery came from the cylindrical vessels and asked Hurst to test them.
The result was overwhelmingly positive: the chromatograph of the tested pieces was almost identical to the standard for cacao against which they compared their samples. Crown had found the first evidence that cacao had indeed found its way to the American Southwest, some 1200 miles north of where it grows. The Ancestral Puebloans were using cacao in much the same way as the Maya, it seems.
A year or two later, Dorothy Washburn found some cacao-positive pottery that was two centuries older in a small site in Southeastern Utah. Read about her discovery in Utah's Ancient Cacao: A Surprising Find.
Also, read about NHMU's ongoing work to uncover early cacao use, both in our collection and at other Utah sites: The Utah Chocolate Story.
More photos from the 1896 excavation of Chaco Canyon, courtesy of the American Museum of Natural History: Image #411891, AMNH Library. "Third layer of vessels, west end, Room 28, Pueblo Bonito, New Mexico, 1896"
Michael Mozdy is a Digital Science Writer for The Natural History Museum of Utah, a part of the University of Utah in Salt Lake City. Our mission is to illuminate the natural world and the place of humans within it. In addition to housing outstanding exhibits for the public, NHMU is a research museum. Learn more.
Blog Author:
Michael Mozdy
Category: Research
Tags: archaeology, celebrating women in science