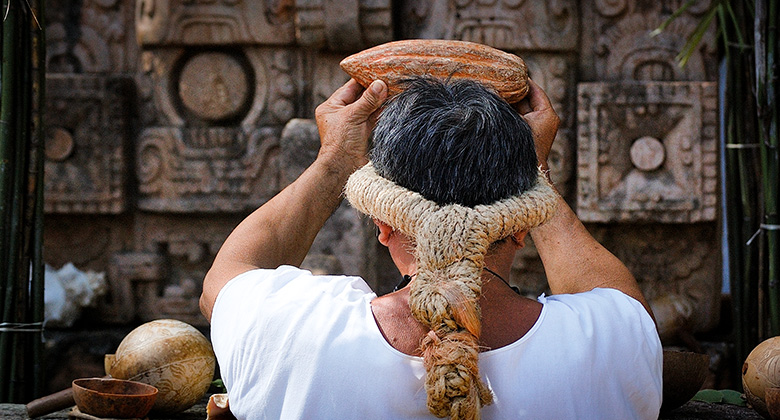 Chocolate has a long history with humans. As early as 1900 B.C., a prehistoric culture called the Mokaya were processing and consuming a liquid that seems to have been chocolate. The Mokaya lived in what is now extreme southeastern Mexico (Soconusco region, state of Chiapas) and parts of coastal Guatemala. Archaeologists have found residue of cacao in pottery vessels that they used.
Over the following millennium, chocolate became an important drink in Mesoamerica. It was used in rituals like burials, weddings, and baptisms by the cultures that followed: the Olmecs, the Mayans, and the Aztecs. It was so valued that it was used in place of money by the Mayans and Aztecs. According to a 16th-century Aztec document, one cacao bean could be traded for a tamale and 100 could be traded for a turkey hen.
The word "chocolate" is traced back to the Aztec word "xocoatl," and the name for the cacao plant, Theobroma cacao, means "food of the gods."
But before chocolate became the sweet worldwide phenomenon we know today, Mesoamerican cultures made bitter drinks with the cacao bean. Some of these drinks were made of the fermented pulp around the beans, and their drinking chocolate was made from the ground cacao bean, water, and flavorings like corn, chilies, honey, vanilla, and agave syrup.
Chocolate emerged as a product of Mesoamerica,
although cacao is native to South America, specifically
the Amazonian basin. While we think of vigorous
vegetation when we consider Amazonian rainforests, it turns out that cacao is a finicky plant to grow. In fact, cacao only grows within 20 degrees latitude (north and south) of the equator. They need light, but not too intense UV light. They need humidity and moisture, generally 40-100 inches of rain per year. And they need constant, warm-to-hot temperatures all year long (60-90 degrees Fahrenheit). The pollinator for this tree is also a very small midge that only thrives in a very humid and moist environment.
All of these reasons make tropical areas the best for growing cacao, and since cacao beans must be planted within one week of harvesting in order to germinate and grow, the process of domesticating this wild plant must have required a fair bit of love and attention.
What you may not know is that chocolate not only moved up into Mexico from where it grows in the tropics, but it also made its way into what is now the American Southwest. In fact, the oldest-yet-found evidence of cacao in the U.S. comes from a cluster of villages in Southeastern Utah!
Read The Utah Chocolate Story to find out more.
Michael Mozdy is a Digital Science Writer for The Natural History Museum of Utah, a part of the University of Utah in Salt Lake City. Our mission is to illuminate the natural world and the place of humans within it. In addition to housing outstanding exhibits for the public, NHMU is a research museum. Learn more.
Blog Author:
Michael Mozdy
Category: Natural History, Research
Tags: archaeology