From a Utah Hike: A Carolina Wolf Spider Story 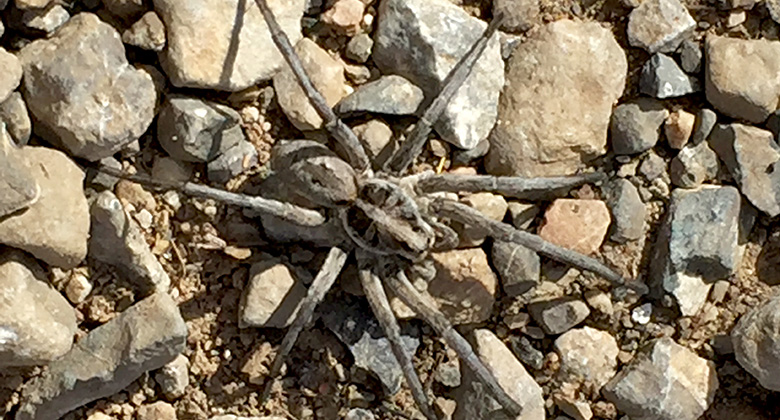 I'm fortunate to have a birthday in one of nature's showiest months, October. This year, my family gave me the great gift of an afternoon hike in Neff's Canyon. While enjoying the breeze and fall colors, we made our way up the rocky path from the parking lot. About ten minutes into the hike, my son clamored for us to come take a look at what he found on the ground. He had spotted a very well camouflaged grey spider on the rocks - something the size of a tarantula, but definitely not one. As we huddled around and checked out this intimidating arachnid, it showed us how speedy it could be by scuttling a foot away in a split second. Definitely not the loping, articulated gait of a tarantula. The Carolina wolf spider was found during an October hike up Neff's Canyon. Photo: Michael Mozdy.

I brought my pictures into the museum to ask our Invertebrate Collections Manager, Christy Bills, just what we had found. She recognized it almost immediately: "Oh, that's a Carolina wolf spider. They're pretty hard to see because they blend right in. Sometimes the best way to spot them is at night, because if you use an LED flashlight, their eyes will reflect back at you upwards of 20 feet away, like little stars."

If ever there was a lover of the creepy crawlies, it's Bills, who always seems to find something endearing about the creatures we all love to loathe. Her story about the Carolina wolf spider, Hogna carolinensis, was no exception. Bills told me about how she once had a female Carolina wolf spider in captivity who had spun a big egg sac that she was holding underneath her body. "They carry around the egg sacs until the babies are ready to hatch," she explained, "and then sometimes you'll see a wolf spider walking around with a ton of little babies all over her back." Bills ignored my involuntary shudder at this tidbit and plowed on.

"Well, we couldn't really have tiny baby wolf spiders hatching and potentially getting all over the building, so I had the very sad job of taking the egg sac away." After some tense moments with some very long tweezers, Bills was able to pry the egg sac away. "She was really unhappy about it," Bills reports of the wolf spider.

"The saddest part was that there was a cotton ball in the jar with a little water on it, and this mother wolf spider proceeded to pick it up and hold it under her body for an entire week after that!"

This melted even my heart, normally hardened like an invertebrate's exoskeleton when it comes to spiders. The thought that creatures we normally think of as tiny-brained legionnaires of the night could exhibit a mothering instinct and behavior that bordered on emotional... well, it surprised me to say the least. Could spiders really experience loss, create a surrogate egg sac/baby, and have that loss and surrogate remain with them over an extended time?? This was news to me, and made me appreciate our eight-legged friends much more.

So, as you tromp through the great Utah outdoors, keep your eyes peeled for these grey spiders, and remember that while you might not want to cuddle with them, they share some very human characteristics. Wolf spider in Germany carrying her babies on her back. Photo: Valerius Geng / Wikimedia Commons