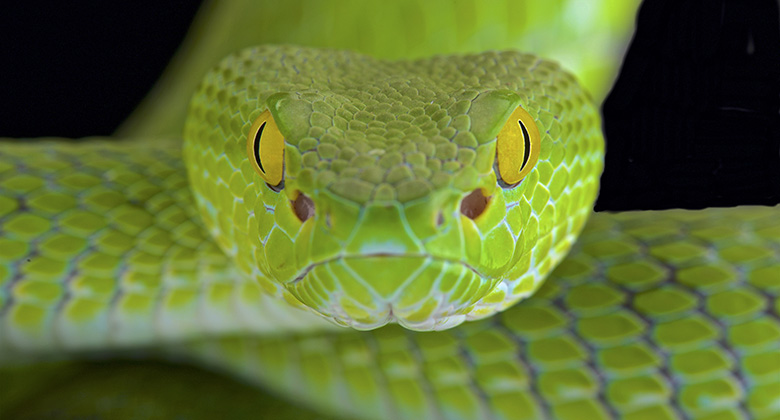 Venomous creatures are different from poisonous ones because venom is always injected whereas poison is ingested or absorbed. Animals have developed many inventive ways to inject their venom, from stingers and teeth to spikes and spurs. Venomous animals can also be poisonous if eaten, so the best advice is just to avoid them altogether. This list is inspired by The Power of Poison exhibit at the Natural History Museum of Utah (from October 15, 2016 to April 17, 2017), and in it we explore some favorite venomous creatures from the NHMU staff.

Cone snails. Photo from theconesnail.com, courtesy of Baldomero Olivera.
Nothing seems so slow and innocuous as a snail in a shell. Breaking this mold is the ocean-dwelling cone snail. All 800 species of cone snails have a hypodermic needle-like radula tooth, which acts like a dart or harpoon to quickly incapacitate passerby fish. Stings from a small cone snail can feel like a bee sting for humans, but a strike from the larger cone snails (6 inches or so) can be deadly. These cone snails have the nickname of the "cigarette snail" because, once stung, you have about the time it takes to smoke a cigarette before you're dead. There are hundreds of different toxins in their venom. The upside, however, is that researchers like the University of Utah's Baldomero Olivera have discovered medical applications for cone snail venom, including pain killers 10,000 times more potent than morphine without the addictive nature and side effects found in narcotic drugs.

In the Trees: Giant Silkworm Caterpillar The Giant Silkworm Caterpillar. Photo: Rosa Caroline Teixeira / Flickr.
Clearly marked with nature's "do not touch" sign, Lominia obliqua is covered with hollow spikes that deliver a powerful venom to those unable to resist the temptation to touch. Before an epidemic of deaths in southeastern Brazil attributed to giant silkworm caterpillars, scientists didn't think caterpillar venom was toxic enough to be lethal in humans. Now that at least 500 deaths have been attributed to them, it's no longer doubted. The venom causes disseminated intravascular coagulation and also spreads anti-clotting agents into the victim's body. The result is internal bleeding throughout the victim's internal organs. And, yes, in case you're wondering, if you were unwise enough to eat one, it is poisonous, too. Wild platypus in a creek in Tasmania. Photo: Klaus / Flickr.
It's not the playful, cuddly animal you grew up believing in. One of the very few mammals known to produce venom, adult male platypuses produce venom in a sac in their leg (called the crural gland) during mating season (late winter/spring). They inject it through a spur on their hind leg, and since it's not produced year-round, scientists think it's for sparring with fellow male platypuses rather than defense or predation. The spur is situated on an articulating bone that allows it to project at a full right angle to their leg if they wish, although the spur normally lays flat on the leg. While not fatal to humans, the pain caused by a spur envenomation is extremely painful and causes severe swelling as well, to the point of incapacitation. The pain generally lasts a few days to a few weeks, although it has been known to persist for several months! It's also been reported that nerve-blocking medicines work better at controlling the pain than morphine-related drugs. Indian red scorpion, Hottentotta tamulus. Photo: Shantanu Kuveskar / Wikimedia.
Most of us experience an immediate flight response, fear, or revulsion coming from deep in our brainstem when we lay eyes on a scorpion. Perhaps it's because they've been on the planet so much longer than we have and therefore were known and feared by our oldest ancestors. The most ancient scorpions are fossils from around 435 million years ago - about 200 million years before the age of dinosaurs! Today, scientists estimate that there are over 2,200 species of scorpions living on every continent but Antarctica. The majority of scorpions are harmless, but some, like the Indian Red Scorpion, are deadly venomous. This fierce fellow is one of the deadliest in the world, measures between 2 - 3.5 inches long, and is ubiquitous in India, Pakistan, and Nepal. While it will sting only as a last resort, it is responsible for many deaths, mostly in children. Like nearly all scorpions, it is nocturnal, so most human encounters happen at night or early morning when the scorpions accidentally crawl into beds or fall from ceilings. *shudder* The inland taipan snake, Oxyuranus microlepidotus. Photo: Mike Prince / Flickr.
Lastly, we arrive at the most venomous snake in the world, the inland taipan snake, also called the western taipan or the fierce snake. More venomous even than sea snakes, it has in fact the most toxic venom of any reptile when tested on human heart cell culture. Just one bite has enough lethality to kill 100 adult men. This may be due to the fact that it is a specialist mammal hunter and its venom is adapted to kill warm blooded animals. In contrast to its aggressive cousin, the coastal taipan, the inland taipan is usually quite shy and calm, avoiding human contact. This rather drab looking snake defies the theme of brightly colored creatures advertising their toxicity. Thankfully, it lives far from Utah in the arid lands of central eastern Australia.

The Power of Poison was a special exhibition that comes to us from the American Museum of Natural History in New York City, on exhibition at NHMU from October 15, 2016 through April 16, 2017. Learn more.