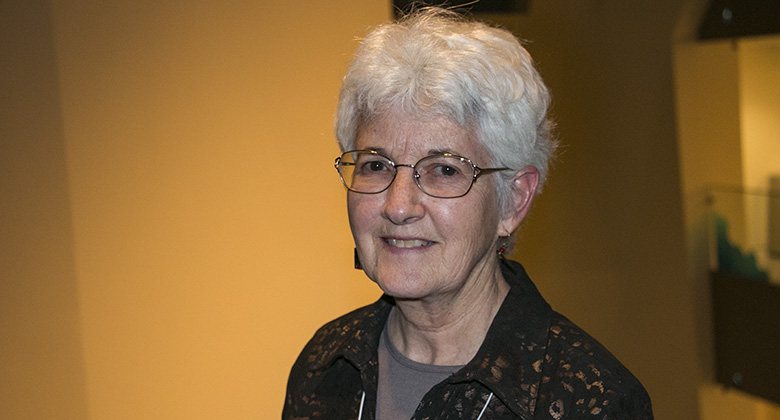 NHMU: What do you think is the most exciting thing going on in paleontology today?

Behrensmeyer: It's a huge number of things. Maybe as a category, the number of young people who are beginning to use modeling and mathematics to synthesize big data. Paleontology, vertebrate paleontology, all kinds of paleontology have been sciences of discovery and description for many, many years - decades, even centuries. That's still going on, but now there are big databases made up of little pieces of these big puzzles. And because young people are now trained in how to manipulate large bodies of data, and they can program, and they're curious about the big patterns that these fossils are presenting, it's like a whole new realm of discovery, looking for the patterns. When they find new patterns they have to go back to the fossils in the rocks and say, are these patterns because of something that happened 200 million years ago in the biology of these organisms, in the communities, or the way that they were evolving, or the extinctions? Like the end of the Cretaceous, which is still in a way a mystery in that some people say that the dinosaurs were beginning to die out and then other people say, no, it's just a sampling issue. But these things now are not just questions that you have to go back to the field to examine - although that's good - they're questions that you can take to the databases and begin to model and see, well, what's the null hypothesis? What would it look like if there were the same number of dinosaurs every hundred thousand years up to the time when the meteorite struck? Otherwise, what would it look like if they were declining? Biodiversity issues, what happened to plants and animals after that extinction event or any of the extinction events, and then how does that relate to today?

That's actually what I'm very much embroiled in at the Natural History Museum with our new exhibit. We're trying to come up into the Anthropocene, into the time of humans, and see how what we're doing now to the planet - the good and the bad - compares with what happened in the past with the extinction events, at the times of diversification, evolutionary innovation. The land was colonized by organisms that created whole new environments, and are we doing something equivalent in magnitude? We want to get people to ask that question by going through our exhibit. Trying to tie all these things together, I think we're in a phase now of synthesis.

NHMU: What is one of your career highlights?

Behrensmeyer: I guess what I'm most proud of at the moment is that I've been able to look at different time periods. I'm a paleoecologist and I like to study taphonomy, which is how things become fossils and what that says about the original ecosystem - the information that's lost versus the information that's preserved. Because I study processes that are not just in one time period - I've been working the Triassic in Arizona, I've been working in the Miocene in Pakistan, I've been working in the Plio-Pleistocene in East Africa, and I've been working in the Modern in East Africa - in order to understand how things become fossilized and how that changes through time. I just went into the field this summer for the 41st year of tracking one modern ecosystem, looking at the bones, and I even found some that I had first seen in 1975, and learned what has been happening to them. Most of them, of course, are disappearing. They're slowly or quickly being recycled. By looking at one ecosystem for that long time, it's allowed me to see that there are mass mortalities that create a lot of bones that could go into the record, then there are times that there are a lot of predators like hyenas who chew up almost everything so there's very little that could become fossilized. So there are cycles, and I never could have known this if I hadn't watched this one ecosystem for 41 years, and I'm hoping to keep it going. So, I guess it's also a kind of pride in surviving all the bureaucracy and getting funding and all of that.

Being able to take out new people, too - I had some new students and Kenyans involved in this project as well as new colleagues, one of whom is an ecologist. The ecologist is studying nutrient cycling from dead animals and so it was kind of an epiphany for me to realize a few years ago that the fossil record that we have is what didn't get recycled in all those ancient ecosystems. It may be a very, very small amount, but think of all those organisms that got recycled. That was an ecosystem just being an engine for nutrition, for new life. Then sometimes, things would get taken out of that and become part of the fossil record. Now I want to take a fresh look at the whole fossil record as what didn't get recycled, and that may or may not be representative of what actually lived at the time - it probably isn't. But it's what we have to work with. There's so much focus now on recycling and trying to make it happen, but nature's been making it happen forever. Otherwise, everything would just grind to a halt because these nutrients need to keep going. Paleontologists are lucky that it doesn't always work efficiently so we have things to study that didn't get recycled.

NHMU: Tell us more about taphonomy.

Behrensmeyer: Taphonomy was a term coined by a Russian in the 1940s as the study of burial. That's what it literally means. It has come to mean the study of information loss and information gain during the process of preservation. You can gain information because the minerals that seep into the bones or preserve the plants change them, and that can be partly a matter of the biological processes that are trying to decompose the animals or plants, but they leave their own signals, which can be interesting. For example, insect burrows on bones and obvious things like termites burrow into bones, so you get all these processes that are leaving marks, tooth marks, etc. It's become a very big field - subfield - of paleontology. Archaeologists are also particularly interested in it because they're trying to distinguish what humans do to bones versus what every other natural process does to bones. I'm actually building a collection at the Natural History Museum called the National Taphonomy Reference Collection. If someone wants to find out what a hyena tooth mark looks like, they can come to the collection and we'll have some specimens to look at and compare.