Fungi in the Gut: Bryn Dentinger’s Look at Microbiomes 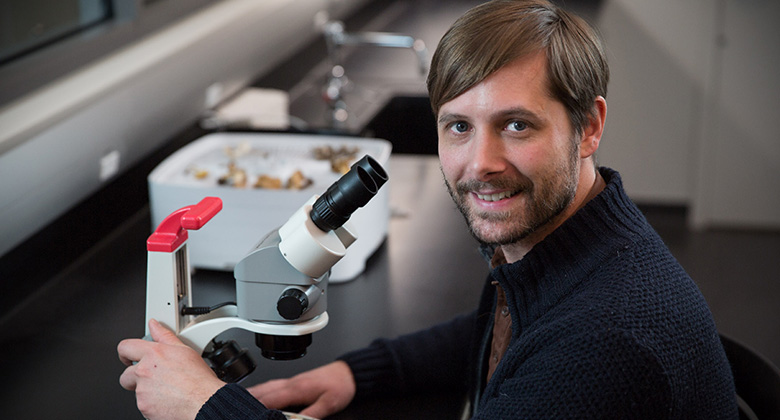 A microbiome is exactly what it sounds like: a mini-ecosystem of co-existing microorganisms. Microbiomes are everywhere: on your skin, your eyes, and perhaps most beneficially, your gut. The cast of characters includes bacteria, fungi, viruses, archaea, and protists.1 The more researchers study microbiomes, the more we are astounded by their variety and abundance.
Their abundance in and on our bodies gives us an opportunity to re-evaluate our predisposition to believe that microbes are all bad. Estimates have changed over the years, but we now believe that there are at least just as many microbes in a human body as there are human cells (if not several times more microbes than human cells). Human digestive problems and disease states can be tied to unhealthy levels of microbes in the gut microbiome (high or low). In fact, total fecal transplants from healthy humans have healed people with mortally dangerous, intractable C. difficile infections.
In other words, not only is our body at least half comprised of microbiota, having them around in the right levels keeps us healthy. With the drastic change in our food over the past century (food grown with chemicals made to kill pests; fertilizers that dramatically increase nitrogen, phosphorus, and potassium residues; chemical additives, enzymes, and human-made flavorings; etc.), researchers have begun to study how what we put into our gut is changing the microbiome.

We’re not the only animals with interesting microbiomes, of course. One of the ways to examine the state of the larger natural ecosystem is to take a deep dive into the tiny world of gut microbiomes. Bryn Dentinger, NHMU’s Curator of Mycology, is interested in cataloguing the fungi found in the guts of Utah’s herbivores.
Dentinger comes to NHMU from the Royal Botanic Gardens, Kew, in London. He has been investigating the global diversity, distribution, and evolutionary history of fungi and how they’ve interacted and coevolved with other organisms. Here in Utah, he’s studying the microbiomes of vertebrate herbivores as a way to catalogue which fungi have co-evolved with their hosts and other local microbes. He notes that we have an increasingly rare opportunity in the Intermountain West to explore relatively unspoiled ecosystems, minimally impacted by humans.
The first step is collection. “Go sample poo,” Dentinger laughingly explains. He’s targeting a group of four-legged animals with hooves called ungulates, which include bison, deer, elk, moose, and antelope, as well as the desert tortoise and mice. These animals have a broad range, forage widely, and leave behind readily identifiable, abundant poo.
Poo in hand, Dentinger must then extract DNA. Helping him is Mimi Brown, NHMU’s genomic technician. Brown comes to NHMU from the Institute for Genomics and Systems Biology at the University of Chicago and brings her expertise in high throughput “omics.”

Analyzing DNA has progressed by leaps and bounds in the past decade. The first human genome, published in 2001, took 15 years and 3 billion dollars to sequence. Today’s “next-generation” sequencing technology can sequence over 45 human genomes in a single day for about $1000 each. This incredibly rapid pace of development has opened new doors for researchers; now, they don’t bat an eye over sequencing tens of thousands of samples to better understand a microbiome.
The technology science behind next-generation sequencing is varied and can get complicated, but here’s an overview. It relies on an ingenious method of identifying different nucleotides, which are the building blocks of DNA: adenine (A), cytosine (C), guanine (G), and thymine (T). “Sequencing by synthesis” technology can identify the different nucleotides by examining the light they emit after being exposed to a laser. The four nucleotides have a specific fluorescent molecule that emits a unique wavelength of light when it’s hit by the laser, so A, G, C, or T can be identified separately. A sophisticated camera captures this light, recording the overall order (sequence) of the nucleotides. This information is stored in a form that researchers can use to compare pieces of DNA and create vast libraries of genes for any type of living creature that carries DNA.
Of course, the nucleotides occurring in nature aren’t actually fluorescent – specially manufactured nucleotides must be placed in the exact order of the naturally occurring ones. What’s more, DNA is so small that a single nucleotide lighting up is undetectable, so a bunch of the same DNA next to each other is needed to provide enough light to be detected. Bryn Dentinger and Mimi Brown in NHMU's Genomics Lab. Photo: Mark Johnston. © NHMU.
To achieve these technical feats, first the DNA extracted from the poo sample is blasted apart with sound waves (called sonication) and two adapters are “glued” onto either end of the DNA pieces. These adapters are very important because they allow the pieces of DNA to stick to the surface of the “flow cell” where they will stay in place while they are copied exactly over and over again. During this DNA replication, their identical twins are conveniently held in place right next to the original piece of DNA. These newly made groups of identical DNA are called clusters, and the clusters do a bang-up job of lighting up simultaneously when the laser hits them, providing enough collective light to be captured on the high-resolution camera.
“You’ll have billions of flashes of light on this little chip,” Dentinger explains, “and the camera captures them for the sequencing.”
After they obtain the sequences of the (literally) millions of DNA bits that they blasted apart, Dentinger and Brown start the task of reconstructing which DNA belongs to which organisms. Thanks to publicly available reference libraries of known genes as well as open-source software algorithms, they’re on their way to compiling a new catalogue of gut fungi found in herbivores of the Intermountain West.

As a mycologist, Dentinger knows that fungi are often the forgotten kingdom. “Even with gut microbiota, people readily think of bacteria, but forget about fungi,” he offers. Yet fungi have a clear impact on health; many antibiotics like penicillin are, after all, from fungi. Most studies of human health have focused on fungal overgrowth when a person is immunocompromised – a condition that can be life-threatening – but little work has been done to understand the mycobiome as a part of a healthy life cycle.
Biodiversity discovery is a huge part of Dentinger’s role at NHMU. “There’s a big gap in Utah,” he points out. “Little is known about what fungi exist here, although they’re thought to outnumber vascular plants by a factor of six-to-one.” Dentinger will be cataloguing many more fungi than the tiny ones in microbiomes, and is already working with groups like the Mushroom Society of Utah to assemble a much more rigorous understanding of the world of Utah fungi.

Establishing a record of the state of herbivore mycobiomes is important in a few ways. First, it is part of a general effort to map the biodiversity of our region. Second, it provides a baseline for future studies. As our natural environment continues to change, this work can help us better understand the relationship between the macro environment (plants available for grazing, average temperatures, moisture and humidity, etc.) and animal microbiomes. These, in turn, can be correlated with health and disease in animal populations. It’s another data point in an increasingly complex scientific understanding of Utah’s rich natural environment.
Thanks to Dentinger, Brown, and NHMU’s Genomics Lab, we are able to move in bold new directions as we seek to understand and appreciate the world in which we live.
1 See a wonderful, illustrated guide to these microbes from the University of Utah’s Genetic Science Learning Center.
Bryn Dentinger, Ph.D., is the Curator of Mycology and Michael Mozdy is a Digital Science Writer for The Natural History Museum of Utah, a part of the University of Utah in Salt Lake City. Our mission is to illuminate the natural world and the place of humans within it. In addition to housing outstanding exhibits for the public, NHMU is a research museum. Learn more.
Blog Author:
Michael Mozdy
Category: People, Research
Tags: mycology

Did a Disease Wipe Out America's Ice Age Beasts?