Gila: the Monster, the Myth, the Legend 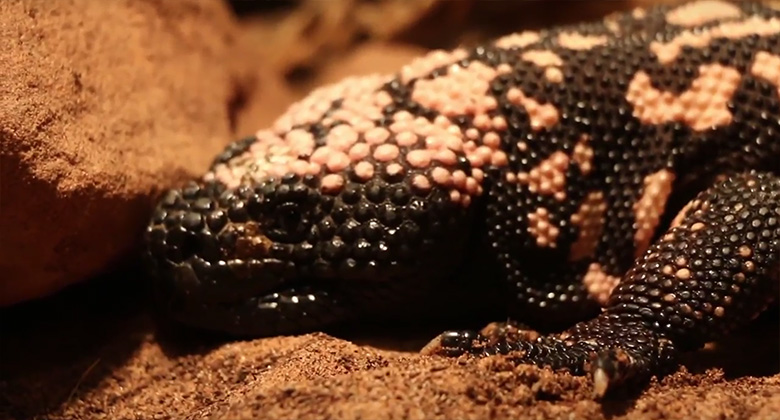 Southern Utah is home to a creature that could have stepped straight out of ancient Greek mythology: a 35-pound monster with poisonous, fetid breath; impenetrable, armored skin; and a bite that is always fatal. Adding insult to injury, it takes either the sunset or a clap of thunder to release its deadly bite.
It’s the dreaded Gila monster, Heloderma suspectum, and like Greek mythology, people once believed all of those “facts,” but now we know them to be myths (sorry, true believers in Poseidon).
The Apache people believed that the Gila monster’s breath was lethal, while the Seris and Yaquis believed in the healing power of its hide. Reputable publications like Scientific American in 1890 published facts such as, “The breath is very fetid, and its odor can be detected at some little distance from the lizard. It is supposed that this is one way in which the monster catches the insects and small animals which form a part of its food supply—the foul gas overcoming them.”
More surprising is the tale of Mormon pioneers in Utah who believed that Gila monster oil taken from their fatty flesh had supernatural powers. An account from the June 16, 1881, Tombstone Epitaph recounts how the pioneers would send Gila monsters they killed to St. George where they would be processed in a huge boiler for three days and the oil skimmed off the top. It continues:
Mormons stricken with remorse congregate from different parts of Utah Territory to this [St. George] temple during the conference. Then may be seen the oil, which is religiously preserved, cast on the water by the officiating bishop, while poor, deluded men and women avail themselves of its efficiency—as they imagine—by entering this tank and bathing in it, thus believing by so doing they are entitled to a corner in heaven.
While we can’t weigh in on the mystical powers the Gila monster may or may not possess, it has contributed greatly to the medical field on this earthly plane. In 2005, the FDA approved a diabetes drug called exenatide based on researcher’s studies of Gila monster saliva.
Yet Gila Monsters are in danger of no longer contributing to medicine or anything else for that matter. Because of disappearing habitat due to development and hunting thanks to human myths and fears, they are on the Utah Sensitive Species List. Even when present, Gila monsters are hard to spot, mainly because they spend 95% of their active time in burrows or under rocks.
Below is a video of the fascinating creature who made NHMU a home for six months.

Here are a few actual facts about Gila monsters:
Note: myths and facts were compiled in part from the book “Gila Monster: Venomous Desert Dweller” by Carolyn Burnhardt and The Gila Monster Had a Killer Reputation by Richard Lapidus.
Michael Mozdy is a Digital Science Writer for The Natural History Museum of Utah, a part of the University of Utah in Salt Lake City. Our mission is to illuminate the natural world and the place of humans within it. In addition to housing outstanding exhibits for the public, NHMU is a research museum. Learn more.
Blog Author:
Michael Mozdy
Category: Natural History, Spaces

In Episode 5, we explore NHMU's special exhibition, Nature All Around...
Posted June 19th

In Episode 5, we explore NHMU's special exhibition, Nature All Around...
Posted June 11th

In Episode Four, we explore the history and life of Utah's Great Salt Lake, starting in the Pleistocene epoch and the once massive...