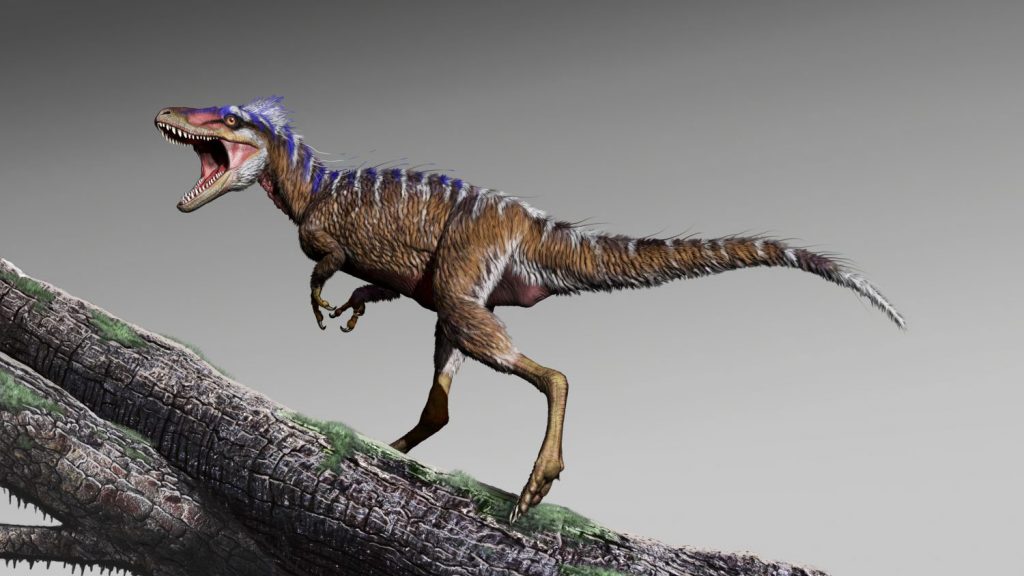 An artist's restoration of what Moros intrepidus may have looked like. Credit: Jorge Gonzalez

If you’re a fan of tyrannosaurs, there’s hardly a better place to find them than Utah. From the tiny, Jurassic Stokesosaurus up throughTyrannosaurus rex itself, fossils found in the Beehive State cover the long history of these prehistoric predators. Now a new find from Utah’s eastern desert adds a new twist to the story of the tyrant dinosaurs.

The new dinosaur was described by North Carolina State University paleontologist, and University of Utah alum, Lindsay Zanno and colleagues. They’ve called the Cretaceous carnivore Moros intrepidus based on 96 million-year-old remains found in Emery County, Utah. The teeth and leg bones of the dinosaur mark it as part of the greater tyrannosaur family, helping to close a gap in our understanding about the history of these famous carnivores.

Despite the fame and ferocity of our favorite T. rex, tyrannosaurs didn’t start off large and in charge. The earliest tyrannosaurs, like Stokesosaurus from Utah’s Cleveland-Lloyd Dinosaur Quarry, were small and looked a bit more like raptors. They stayed meek little hunters for tens of millions of years. It was only about 81 million years ago, in the form of predators like Utah’s own Lythronax, that tyrannosaurs really took charge. Teratophoneues continued the trend in our state around 75 million years ago, with the iconic, 66 million-year-old T. rex being the last of its kind.

Recent discoveries in Asia have helped fill out the tyrannosaur story there, but paleontologists haven’t been quite so lucky in North America. Until now, the tyrannosaur record on our own continent went cold in rock about 145 million years old and didn’t pick up again until about 81 million years ago - a gap of over 60 million years. That’s what makes Moros important. At about 96 million years old, Moros lived in the middle of this mysterious time and provides a picture of what tyrannosaurs were like approximately 15 million years before they made their power play.

Moros was a tiny terror. From the microscopic structure of the dinosaur’s bones, Zanno and colleagues suspect the specimen of Moros they described was six or seven years old when it died. It was almost an adult, but, based on calculations made from the bones, probably only weighed about 170 pounds. That makes Moros one of the smallest tyrannosaurs of the Cretaceous.

There could be other big tyrannosaurs out there. Yutyrannus from China, for example, was about 30 feet long and lived about 125 million years ago. There are still significant gaps to fill in North America’s tyrannosaur record. But, if Moros is any indication, tyrannosaurs were small and swift little biters for almost their entire history. These dinosaurs were pipsqueaks, ducking and darting out of the way of larger carnivores. Eventually, though, tyrannosaurs got their chance and became some of the more impressive flesh rippers of all time.

When Mummification Was For the Birds