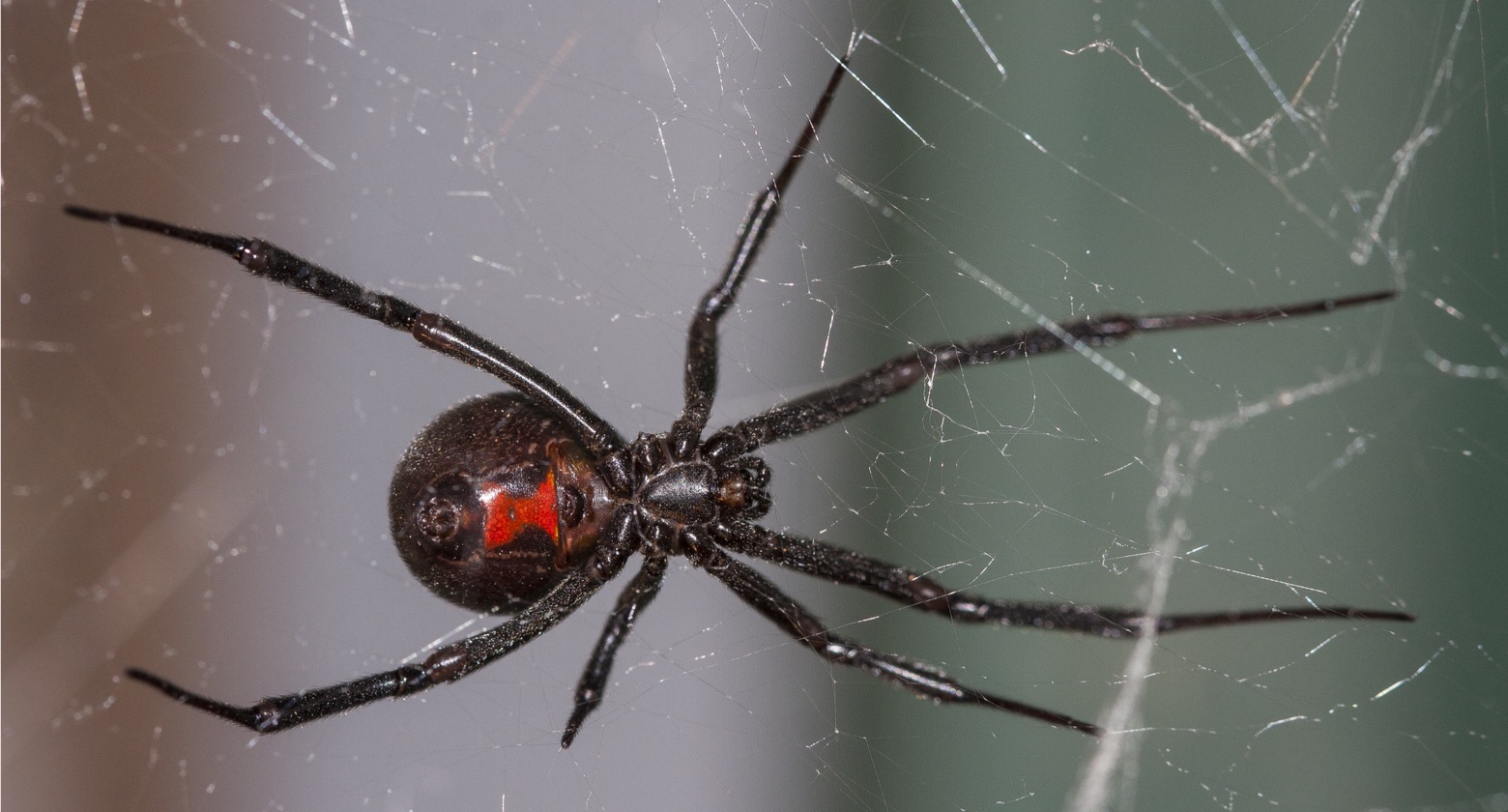 A black widow spider in her web.

I didn’t expect the spider there. I had just been setting up my grilling equipment as I had dozens of times before, but when I looked down into the charcoal chimney I saw a splash of red on a shiny black body. A black widow. There was no way of missing her, either. Her abdomen was about as big as my thumbnail. I knew what I had to do. I carefully took the chimney further away in the yard and put it down on its side to suggest that my arachnid neighbor find some other place to go.

Despite living in Utah for seven years, I had never seen a black widow in or around my home before. I know my friends had, their discoveries often followed by creeped out expressions and tales of how the spiders were exterminated. But I always wondered if this was really necessary. Black widows have a bad reputation, sure, but is it at all earned? I asked Natural History Museum of Utah entomology collections manager Christy Bills to find out. First of all, it’s worth noting that black widows are fascinating arachnids in their own right. “Black widows have a kind of bizarre morphology if you think about it,” Bills says, the spiders characterized by a very large abdomen and tiny legs that more or less restricts them to life in their webs. “They are the kind of spider, like many others, that don’t want to leave their homes and aren’t really adapted for roaming, anyway,” Bills says. Once they set up their “strong, erratic, unique” web, that’s where they’ll hang out.

Still, despite whatever marginal good press the Marvel superhero Black Widow has done for the species, these spiders are usually treated as dangerous houseguests. It’s difficult for fascination to outstrip fear. Throw in widespread arachnophobia and it’s no wonder people generally aren’t fans of Latrodectus hesperus (the scientific name for the Western black widow).

But our fear is misplaced, Bills says. Black widows are definitely not out to get us. They want to snag smaller invertebrates and insects to eat, not chase people. “Also,” Bills says, “people are definitely afraid of the wrong thing here. There are very few, possibly zero, black widow spider deaths in the US in the last hundred years.” Compare that to the number of deaths caused by the sting of honeybees or the diseases carried by mosquitoes, Bills says, and, really, black widows give us nothing to fear.

If anything, black widows - and other spiders - have more reason to run away from us. “Here’s the analogy I like,” Bills says. “If Godzilla was running through your city, your first inclination probably wouldn’t be ‘I’m going to run over there and bite him on the toe.’” Doing so probably wouldn’t have much effect and it would risk you getting smushed. “So, same for spiders,” Bills says. “They don’t see us and think ‘Better attack!’ They see us and think ‘I hope that thing doesn’t eat me!’” In fact, a 2014 study in which black widows were prodded and squeezed to understand how they defend themselves found that the spider generally preferred to retract, and that they only used venom as a defense when they felt highly threatened.

So, what should you do if you happen across a black widow in your garage, kitchen cabinet, or grilling equipment? While Bills notes that you should leave most household spiders in place - “think of them as organic, free exterminators” of bothersome insects, she says - black widows are something of an exception because of the painful bites they can inflict if you accidentally squeeze one. “So, if you really want to get her away from people,” Bills says, “take her up to the foothills and put her at the base of a sage brush bush.” An empty jar, a piece of junk mail to slide over the opening, and a little care should do the trick. And if you do so, take a moment to admire the arachnid before you release her into her new home. She’s a remarkable spinoff of evolution, just like you.