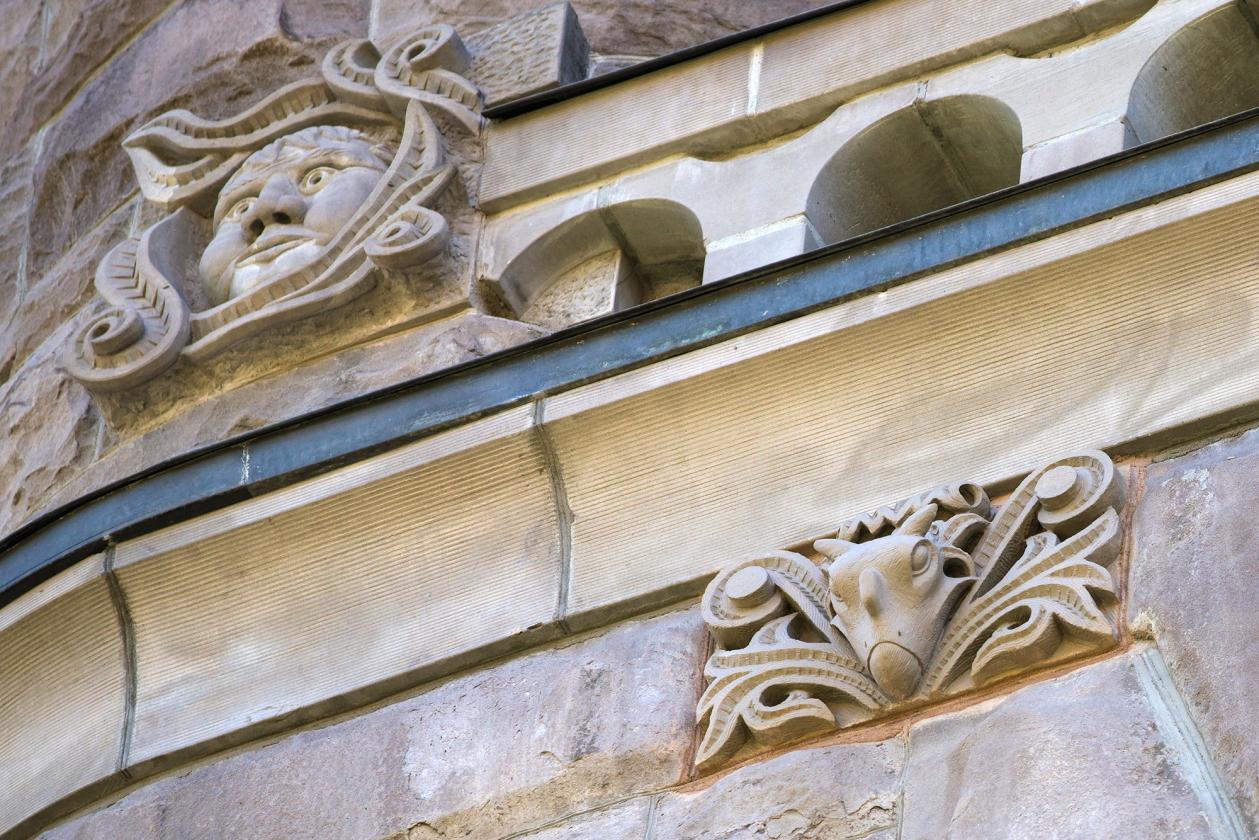 A stone carving of Kosmoceratops on the north wall of the City County building. Credit: NHMU

Should you find yourself wandering by the City County building downtown, take a moment to look up and inspect the decorations on the outside of the building. You may just spot an ornate, and familiar, many-horned face - Kosmoceratops.

Artist Jeff Eakle of Abstract Masonry Restoration created a pair of the dinosaurs in stone for the city building. The process was something of a winding one.

The city commissioned Eakle to come up with some new stone carvings for the downtown edifice. Eakle initially came up with four possibilities - a bat creature to match existing designs on the building, an eagle creature to represent government, a sort of self-portrait to follow a long stone carving tradition, or a dinosaur.

Inspiration for the dinosaur, Eakle says, is because of a dinosaur fan in the family. “My son Julien asked me if I could carve some dinosaurs after he saw me carving the two mythological creatures for the west side of the building,” Eakle says. “I haven’t seen any previous carving of a dinosaur on a building before, so I took the challenge.”

But what dinosaur to choose? We certainly have plenty in Utah. Allosaurus, Apatosaurus, Stegosaurus, Utahraptor, Lythronax, Parasaurolophus, and so many more. But a trip to the Natural History Museum of Utah narrowed down the field to two options - Utahraptor or one of our local horned dinosaurs. In the end, Kosmoceratops won out. Fitting for the project, Eakle says, the natural aesthetic of the 75 million-year-old dinosaur fit the project. The dinosaur’s many-horned frill, Eakle says, reminded him of some of the designs already on the building. From there, working from Kyune gray sandstone taken from outside the Utah town of Helper, Eakle used calipers, compasses, hand tools, and more to first sculpt the dinosaur in clay and then create the final piece in stone.

The pair of Kosmoceratops Eakle created now watch over the building, a testament to our state’s magnificent past. Riley Black is the author of Skeleton Keys, My Beloved Brontosaurus, Prehistoric Predators, and a science writer for the Natural History Museum of Utah, a part of the University of Utah in Salt Lake City. Our mission is to illuminate the natural world and the place of humans within it. In addition to housing outstanding exhibits for the public, NHMU is a research museum. Learn more.
Blog Author:
Riley Black
Category: Natural History
Tags: paleontology

In this episode, Executive Director Jason Cryan welcomes you to our museum and we tour our Past Worlds Gallery and the Paleo Prep...
Posted April 29th

City Nature Challenge Highlights the Zoo in Your Backyard

Programs like City Nature Challenge allow everyone to find the wonder of nature as close as their own...