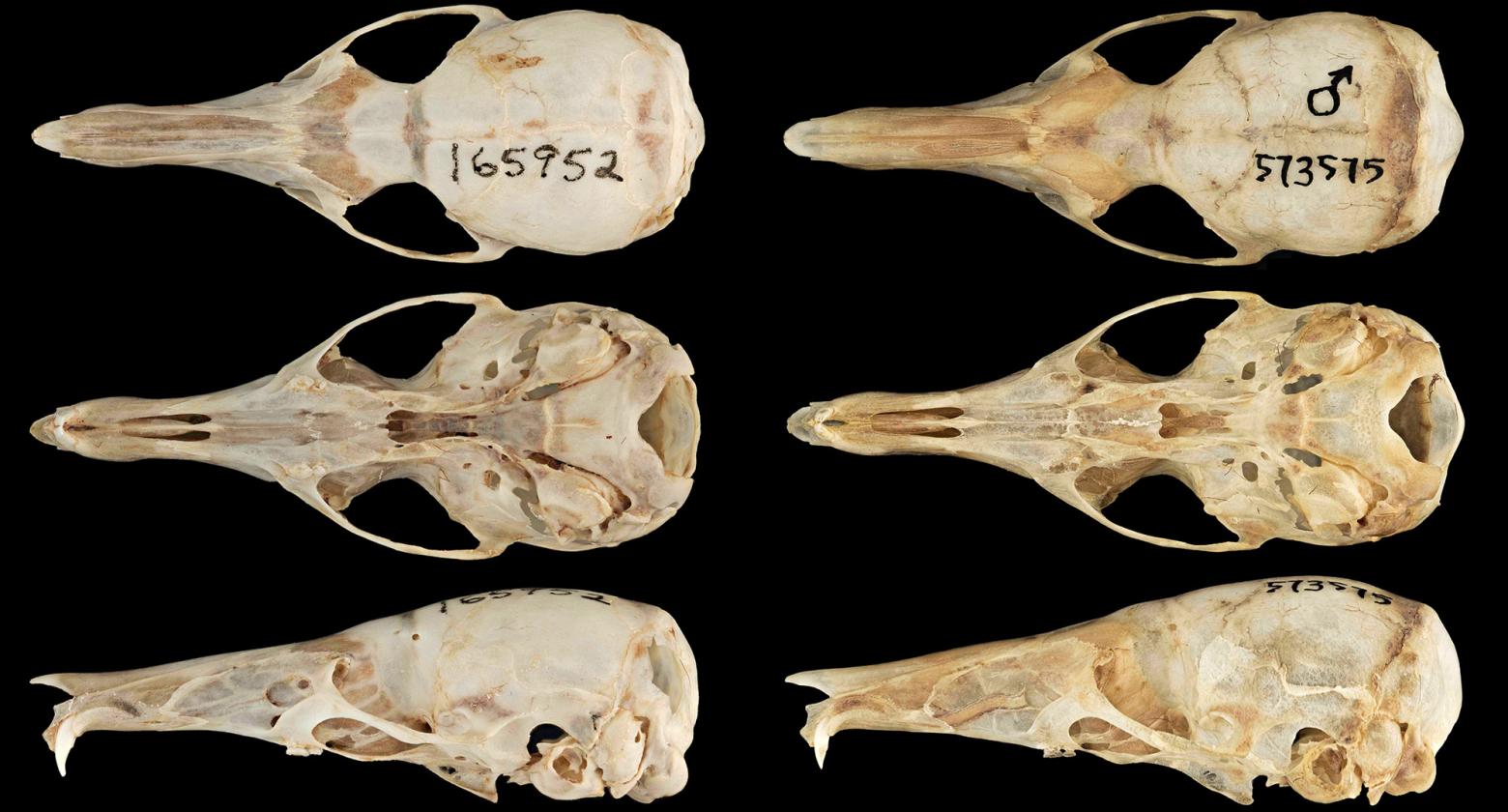 A team of scientists headed by Dr. Eric A. Rickart of the Natural History Museum of Utah has identified two new animal species, shrew-rats found only at particular zones in mountains on the island of Luzon, Philippines. Rickart is curator of Vertebrate Zoology at the museum, which is part of the University of Utah.

The species, Rhynchomys labo and Rhynchomys mingan—given the English names Labo shrew-rat and Mingan shrew-rat, respectively—are announced in a paper published in the Journal of Mammalogy, Oxford University Press. The paper presents pages of detailed descriptions of aspects that make these animals stand out from other shrew-rats.

A great deal of careful examination, measurement, data analysis and detailed description is required in announcing a new species, said Rickart. “Lots of people have been involved in this work from the initial collection of specimens and field data to the final editing of the publication.” Illustration by Velizar Simeonovski.
Shrew-rats are considered large-bodied; they are also called “tweezer-beaked hopping rats,” based on looks and locomotion. They prey on earthworms. Adult Labo and Mingan types were generally about a foot long counting the tail and are known for extremely long snouts and long, slender jaws with thin, sword-like lower incisors, the paper says.

Four species of shrew-rats unique to the mountains in Luzon had been described earlier; Rickart was also involved in their discovery.

During 2006 and 2008 field studies on Luzon’s Mt. Labo and Mt. Mingan, scientists and assistants gathered 45 specimens of the new species. But to determine that they actually were unknown to science and not just variations of known species, they were carefully examined and weighed, with measurements of every feature from tail size, foot size, type of snout and coloration, to dimensions of skull features. These were compared with their counterparts of the four other species.

Measurements of skull features, crucial in defining a species, were made by Rickart, who used dial calipers and recorded the sizes to the nearest 0.1 millimeter (about 4/1000 of an inch). Over the years, he has been involved in collecting specimens in the Philippines that represented many new animals. In a decade, scientists working on Luzon alone doubled the number of known animal species, and other new ones have been found elsewhere in the Philippines, he said.

“In many instances,” Rickart added, “we knew immediately while in the field that we found something new to science—that is one of the most exciting events in the life of a field biologist.”

What are some of the more difficult aspects of working in the Philippine mountains?

“All of the field work we do is conducted around base camps that are far from roads, and require hours (or in some cases multiple days) to reach over primitive trails. The field routine involves running trap lines, processing specimens, gathering field data under fairly primitive conditions—sleeping in tents, working throughout the day and often late into the evening, eating rough fare—for periods of several weeks with intermittent bad weather.” Eric Rickart (back left) Larry Heaney (front right) and two students in the Philippines during field studies.
He quickly adds that while some field seasons have been quite uncomfortable, “in general bad periods are vastly outweighed be the good.”

The Labo shrew-rat was discovered only on the forested northern slope of Mt. Labo between about 4,100 and 4,600 feet elevation, while the Mingan shrew-rat inhabits old-growth moist, cool and mossy forests on the southwestern slope of Mt. Mingan between around 4,840 and 5,600 feet.

The value of the research includes not only discovery of unknown mammal species but finding out how their distribution reflects eons-long changes in the landscape and wildlife populations, and recognizing the importance of habitat protection for many species in the Philippines, among them people.

According to the study, the shrew-rats are believed to be the descendants of animals that colonized the Philippines about 8.4 million years ago, plus or minus 900,000 years. Their closest relatives are native to Australia and New Guinea. (Like many other island creatures, presumably groups of them washed in aboard storm debris from elsewhere.)

Mt. Mingan and Mt. Labo are separated by nearly 40 miles of lowlands of around 1500 feet elevation. The new animals are found in mid- to high-elevation areas. The authors hypothesize that their common ancestors arrived in the Philippines’ Bicol region before it converged with central and northern Luzon. The ancestors may have diverged and become isolated, with other species moving in later.

The report concludes that so far, the area that the Mingan and Labo shrew-rats inhabit have minimum human disturbance. It adds:

“Nevertheless, all areas of highland habitat, and particular those supporting endemic species, require protection from direct overexploitation of forest resources and indirect threats posed by geothermal and mining activities. Protection of these areas would have added socioeconomic benefit in maintaining crucial watershed functions in this region of frequent typhoons.”

Rickart remembers the first time he came upon a shrew-rat. He and his friend Larry Heaney, who is now curator of mammals at the Field Museum, Chicago, were making a mammal survey of Mt. Isarog on Luzon.

“It was on that trip that we first saw Rhynchomys and learned that they were highly specialized earthworm predators.  For me personally, that was one of the most exciting discoveries we ever made. It was during this trip that we realized many of the rodents on Luzon were earthworm predators and it dramatically broadened our understanding of the mammal communities of the Philippines.”

Joe Bauman is a retired newspaper science reporter living in Salt Lake City. The Natural History Museum of Utah is a part of the University of Utah in Salt Lake City, with a mission to illuminate the natural world and the place of humans within it. In addition to housing outstanding exhibits for the public, NHMU is a research museum. Learn more.

Read more about Dr. Eric Rickart's research in the Spring Mountains of Nevada.