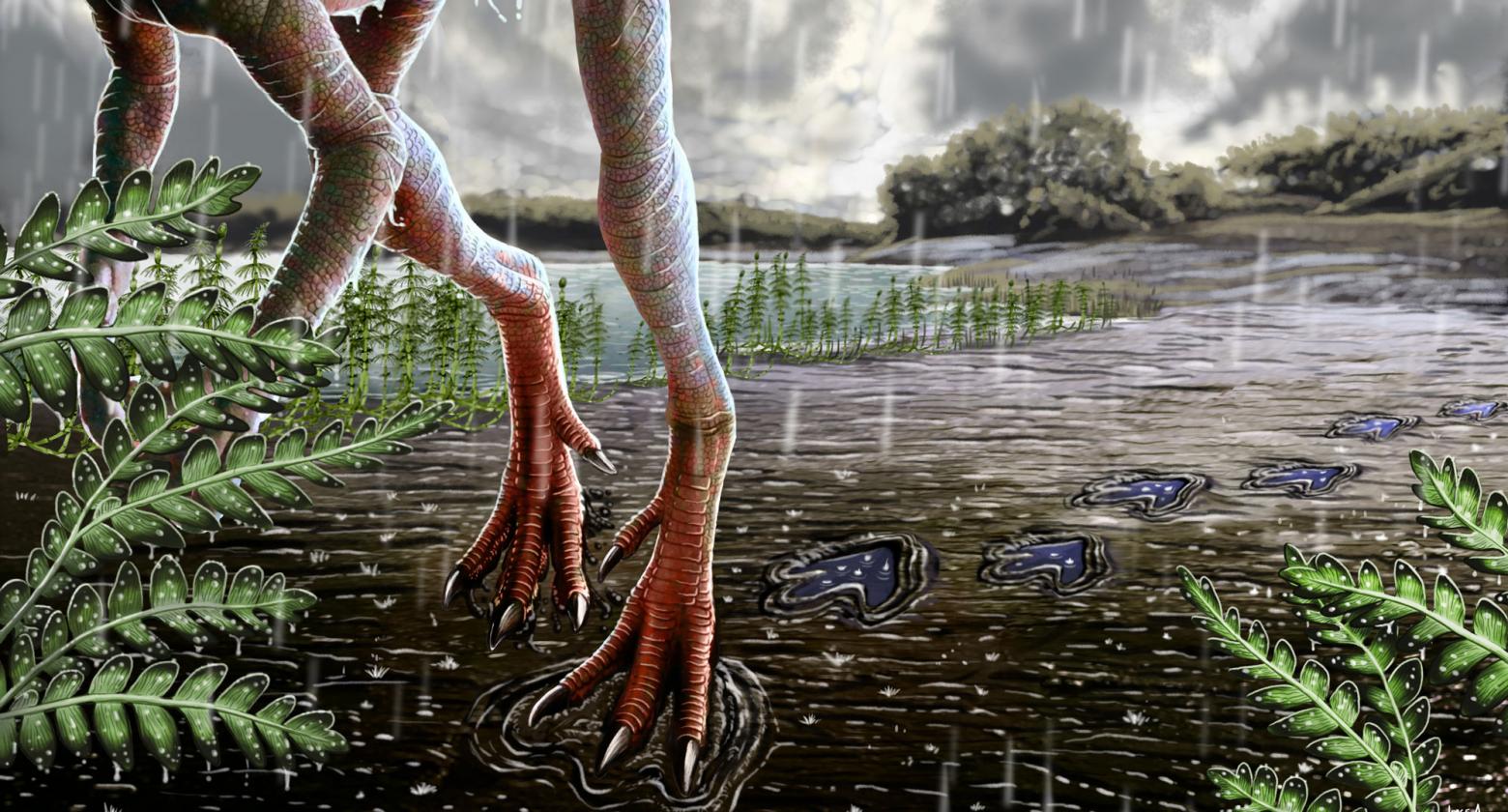 A dinosaur-like reptile leaves muddy footprints along the shoreline of a lake during a rainstorm some 234 million years ago in northwestern Argentina. ©Jorge Gonzalez/NHMU

by Randall Irmis and Adriana Mancuso

The very beginning of the age dinosaurs was an exciting time on Earth, with giant volcanic eruptions spewing greenhouse gasses into the atmosphere, large asteroids colliding with the planet, and generally toasty temperatures across much of the globe. This time, called the Late Triassic Period (~235-201 million years ago), also saw the origin and early radiation of dinosaurs, lizards, turtles, pterosaurs, and mammals, among many other animal groups. With so much going on, many scientists have wondered: did global climate change affect the evolution of the first dinosaurs?

The first definitive dinosaurs appear in the fossil record about 231 million years ago in what is now Argentina and Brazil.  And geologists and paleontologists have good reason to suspect that climate change might play a role in dinosaur origins – around the same time, there is a sudden change towards wetter and warmer conditions, called the Carnian Pluvial Episode, or CPE for short. So it might be possible that this created a more favorable climate for dinosaurs compared to some other animals, and they began to diversify.  But there’s a snag in testing this idea: most of the evidence for the CPE comes from the margins of an ancient ocean called the Tethys in places like Europe and China, which are very far away from the first dinosaur fossils in South America. What we really need is evidence for the CPE from the same area as the dinosaur fossils. To help solve this problem, our team examined sedimentary rocks from one of the main places these earliest dinosaur fossils are found – the Ischigualasto-Villa Unión Basin in northwestern Argentina.  Here, thousands of feet of sediment were piled up by lakes, rivers, and streams throughout much of the Triassic Period, which not only preserved a rich fossil record, but also clues to what the climate was like when each layer was deposited. As such, it is a perfect place to see whether the CPE affected early dinosaur ecosystems.

Before we could tease out those climate clues, we first had to figure out which layers were deposited during the time of the CPE.  To do this, we collected a sample of a thin volcanic ash layer, which contained small needle-like crystals of a mineral called zircon, and can be radioisotopically dated by comparing the ratio of uranium to lead in each crystal.  The results showed the ash layer was ~234 million year old, which meant that the CPE should be preserved in the lake sediments just above (and therefore slightly younger than) the volcanic ash.

To see if there was evidence of the CPE in those layers, we looked at the 3D geometry of the layers, which provides information on the size of the lake, examined carbon and oxygen stable isotope values of limestones, which provides information on temperature and other lake conditions, and investigated the specific types of clay minerals preserved, which can inform how warm/cool and humid/dry it was in a relative sense.  These different pieces of information all pointed to one conclusion: the sediments just above the ash layer were deposited in warmer and more humid conditions than sediments from earlier and later in time.  So, our new research suggests that there is indeed evidence for the CPE climate event in the same places in which the earliest dinosaurs were living! But did this climate change have any direct effect on dinosaur evolution?  The evidence is uncertain at this point.  The CPE seems to have begun 1-2 million years before the first layers containing dinosaur bones.  These warmer/wetter conditions are associated with dinosaur-like footprints, but we can’t tell if these footprints were made by early dinosaurs or their close relatives (think aunts, uncles, and cousins).  So its possible that the CPE set the stage for dinosaurs to diversify into many different species, but its also possible that the first dinosaur evolved just after this climate event.  We need to go out and find more fossils to resolve this enigma!

Randall Irmis is the chief curator and the curator of paleontology at the Natural History Museum of Utah and an associate professor in the Department of Geology & Geophysics, both parts of the University of Utah in Salt Lake City. The Museum's mission is to illuminate the natural world and the place of humans within it. In addition to housing outstanding exhibits for the public, NHMU is a research museum. Learn more.