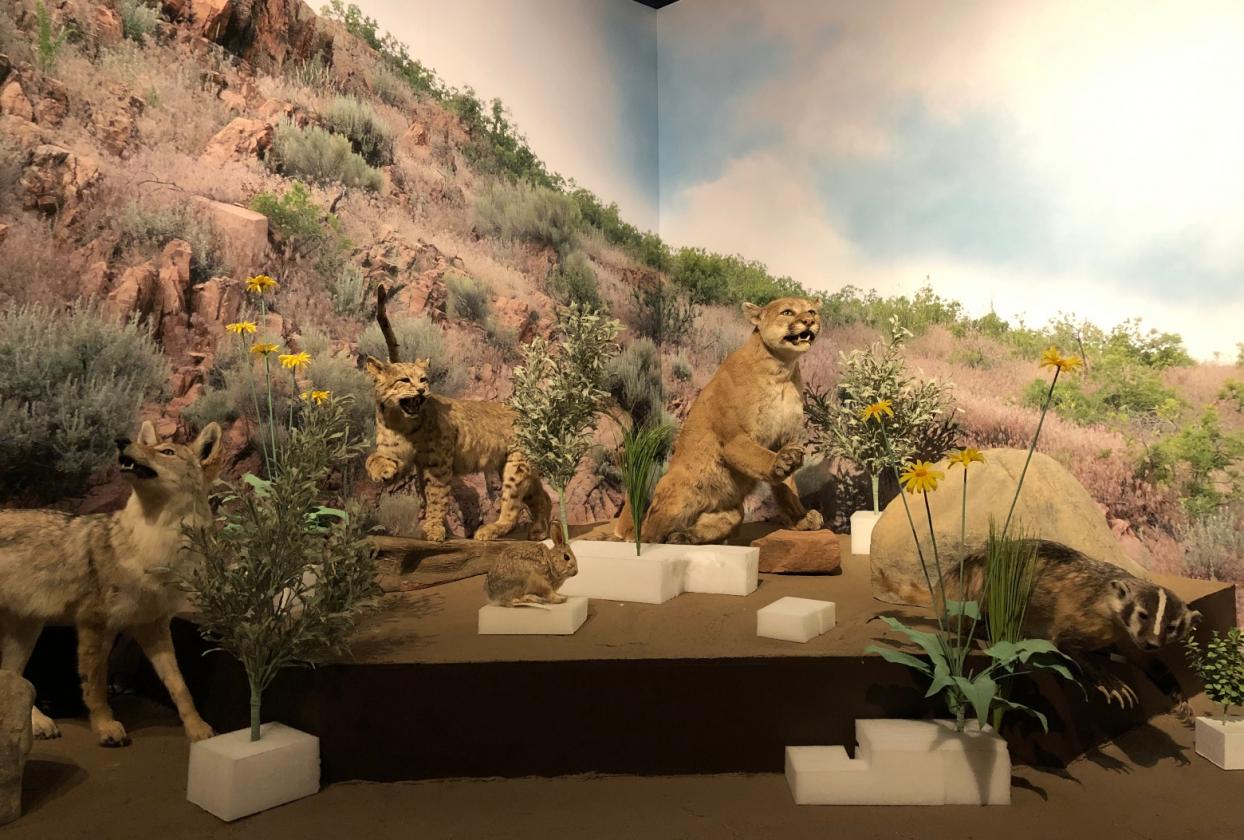 Diorama 2.0 being built prior to the exhibit opening. ©NHMU

The word “diorama” has a bit of a dusty reputation. The term conjures visions of the great museum-building era of the early 20th century, where taxidermized animals were placed in front of intricately painted backgrounds. But the display concept isn’t extinct. In fact, the exhibit team at the Natural History Museum of Utah has given traditional dioramas an upgrade.

Planning the Nature All Around Us exhibit gave the Museum exhibits team the chance to draw outside the boundaries of traditional design. “I definitely saw an opportunity to do something new,” says Senior Exhibit Designer Tim Lee, “but I didn’t know what that opportunity was until I was introduced to a new technology called projection mapping.”

You may have seen the tech in places like theme parks. Projectors wrap video around different shapes, allowing the moving images to mix in and enhance static objects. For example, Lee noted with a chuckle, imagine a full-size Barosaurus walking across the front of the Museum and you’ll have an idea of what the innovation can do. Part of the projection mapping planning process, in which video was set to be projected onto the display. ©NHMU
An image of a Salt Lake City foothill diorama, showing numbered squares used to plan a projection map.

In the case of Nature All Around Us, creating an immersive diorama seemed like the perfect way to meld old and new. “I looked at dioramas, one of my favorite things as a kid, and as an adult,” Lee says, “and I wanted to do something different from the classic life group against a painting or photo.” A display of the organisms found in the foothills around the Museum, as well as other exhibit interactives, seemed like the way to go. The next step was actually pulling it off.

“I have new respect for all the wildlife video groups,” Lee laughs. “You can’t always make animals do what you want them to do.” Working with a video team and professional animal handlers, the designers took footage of critters from skunks to snakes to project onto the exhibit. From there, it was a matter of determining what footage would work on the available surfaces of the displays. “It’s kind of like a dance,” Lee says, matching the animal behaviors to what would look natural and work for the display.

The result is a diorama that draws visitors in. There are the animal mounts against a foothill backdrop while the calls of magpies play, but also projected video of local wildlife, an interactive magnifying glass visitors can use to spot hidden insects, and small enclosures for living animals. The diorama isn’t a static scene, but lives. “We tried to do everything with the exhibit,” Lee says. “We wanted everything to come to life.”