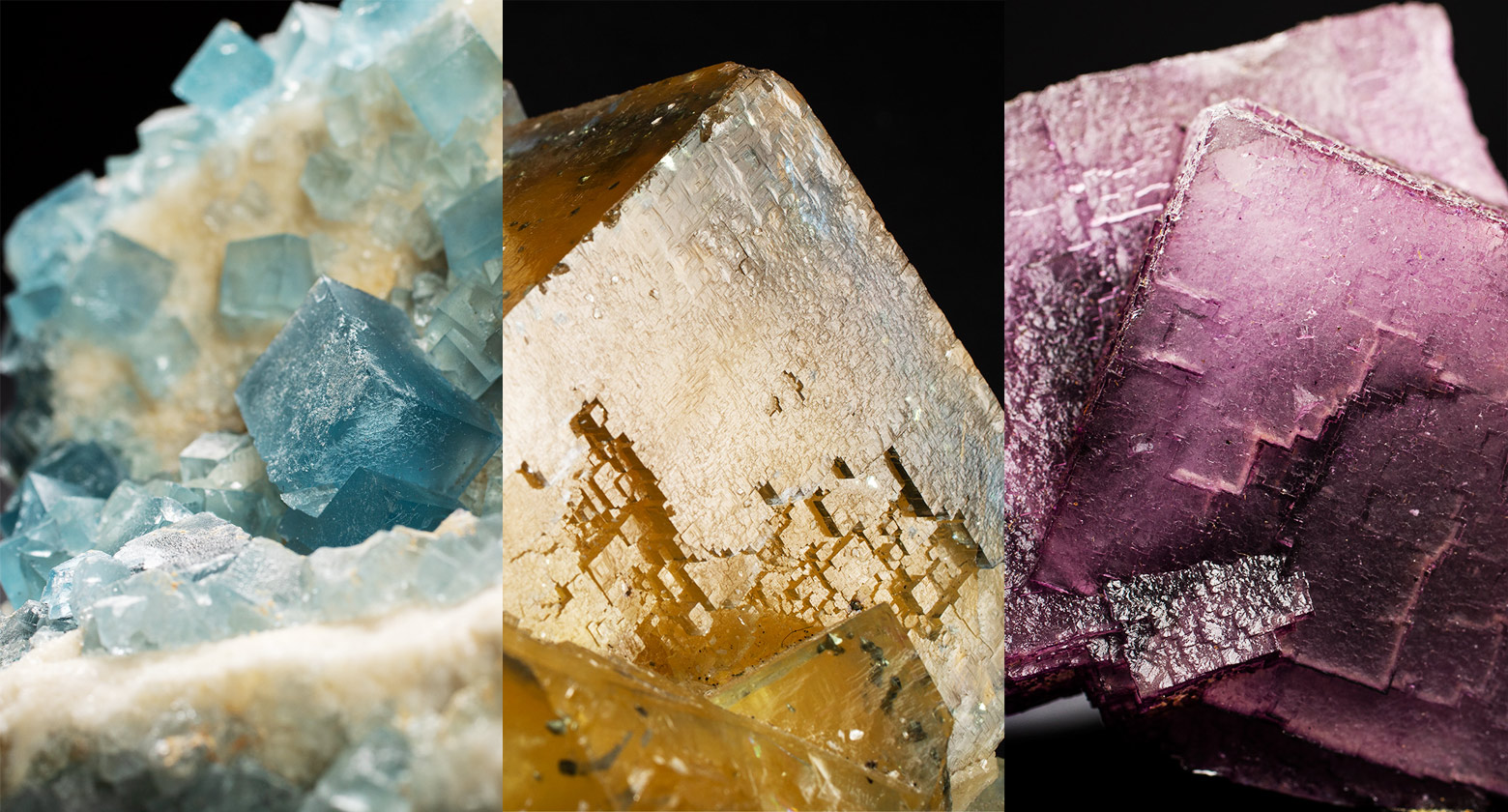 A selection of minerals from the family of fluorite. ©NHMU

Fluorite is very popular amongst collectors and museum visitors due to its beauty and relatively common occurrence.  It has been found in just about every color of the rainbow, in sharp cube and octahedral crystals and even dodecahedrons and combinations such as a cube with octahedral faces on each corner of the cube.  Fluorite is frequently found in cavities in limestone in quarries and in ore deposits.  More rarely, it is found in cavities in coarse granite-type rocks (especially pegmatites) and even in volcanic flow rocks such as rhyolite.

The chemical formula of fluorite is CaF2.  It was named in 1797 from the Latin word “fluere”, which means “to flow”.  That was because ground up fluorite was added as a flux to provide better flow in making glass and processing iron ore into iron.  The chemical element fluorine was not even discovered until 1886, but as you can see was named after fluorite.  Fluorescence also was named after fluorite.  This phenomenon was observed by miners in the fluorite mines in the Weardale region of England.  When the fluorite was underground, it had a beautiful bright green color, but when taken out into the sunlight, it changed color to bluish.  Scientists discovered that the change in color resulted from exposure to ultraviolet light, which is the higher energy portion of sunlight that causes you to get sunburned.  When you visit the NHMU, be sure to stop at the long wave ultraviolet light display case in the mineral exhibit on the third floor and see how the green fluorite changes to a bright bluish-white when the lights are turned out and the ultraviolet light is turned on. Utah is home to many fluorite localities.  Image 1 shows a cluster of fluorite crystals from the Deer Trail Mine near Marysvale, Utah.  When found in the mine, the crystals are coated with a thin layer of quartz to appear white and opaque.  However, when the quartz is dissolved away with hydrofluoric acid, the beautiful color of the fluorite is revealed, plus a bonus is that the crystals fluoresce brilliantly. Even the crystal shape is special.  Some of the crystals are dodecahedrons (12 diamond-shaped faces) and others are interesting combinations of cubes, octahedrons and dodecahedrons.  Besides the specimen in the fluorescence exhibit, a much larger specimen is in the Utah minerals exhibit. Another interesting source of brightly fluorescent fluorite is in the Dugway Mining District in Juab Co., Utah.  Here the fluorite is in banded layers that alternate between blue-green and white, purple and white and various shades of purple.  Image 2 shows a spectacular polished specimen of the banded blue-green fluorite.

Pink and purple cubes of fluorite have been found in cavities in the Wildcat Mountains in Tooele Co., Utah.  Examples are shown in Images 3 and 4.  Unfortunately, this locality is now part of a military bombing test range, so is not accessible to collectors. Some of the most beautiful fluorite specimens in the world came from the fluorite mines in Harden Co., Illinois.  Most of these mines closed in the early 1990s, but fortunately the NHMU received donations of a wonderful selection before the mines closed.  One of the best is shown in Images 5 and 6.  Image 5 shows an overview of the whole specimen, which is about 25 cm across.  The first fluorite to grow was yellow cubes.  Growth stopped, but then tiny golden crystals of chalcopyrite deposited on the surface of the yellow cubes. Then fluorite growth continued, enclosing the chalcopyrite and yellow fluorite, but this time the color was pale blue.  We refer to the fluorite crystal inside another fluorite crystal as a “phantom” and the chalcopyrite crystals as “inclusions”.  Some collectors specialize in phantoms and others in inclusions. That is what is so fun about collecting minerals; there are so many fascinating variations. Many minerals exhibit cleavage.  They fracture along a flat surface in a way that is related to their internal arrangement of atoms.  For example, mica has a layered structure with strong atomic bonds within the layers, but week bonds between the layers.  Thus, mica fractures easily between the layers and is said to have perfect cleavage in one direction.  Fluorite has perfect octahedral cleavage in multiple directions. Cleavage planes often show up in crystals as thin fracture or crack lines. Image 13 illustrates these cleavage lines in a cluster of very large (about 5 cm across) multicolor octahedrons of fluorite from the De’an Mine, Wushan, China.  Similar cleavage lines are easily visible in Image 14 in large cube crystals of fluorite from the Southern Illinois mines. Dave Richerson is the mineralogy collections manager at the Natural History Museum of Utah. He is a retired associate professor of material science and engineering at the University of Utah. He is the author of the books "Modern Ceramic Engineering" and "The Magic of Ceramics," co-author or co-editor of five other books, and author or co-author of more than 100 technical and educational articles and reports. NHMU is part of the University of Utah in Salt Lake City. Our mission is to illuminate the natural world and the place of humans within it. In addition to housing outstanding exhibits for the public, NHMU is a research museum. Learn more.