The Many Colors of Tourmaline 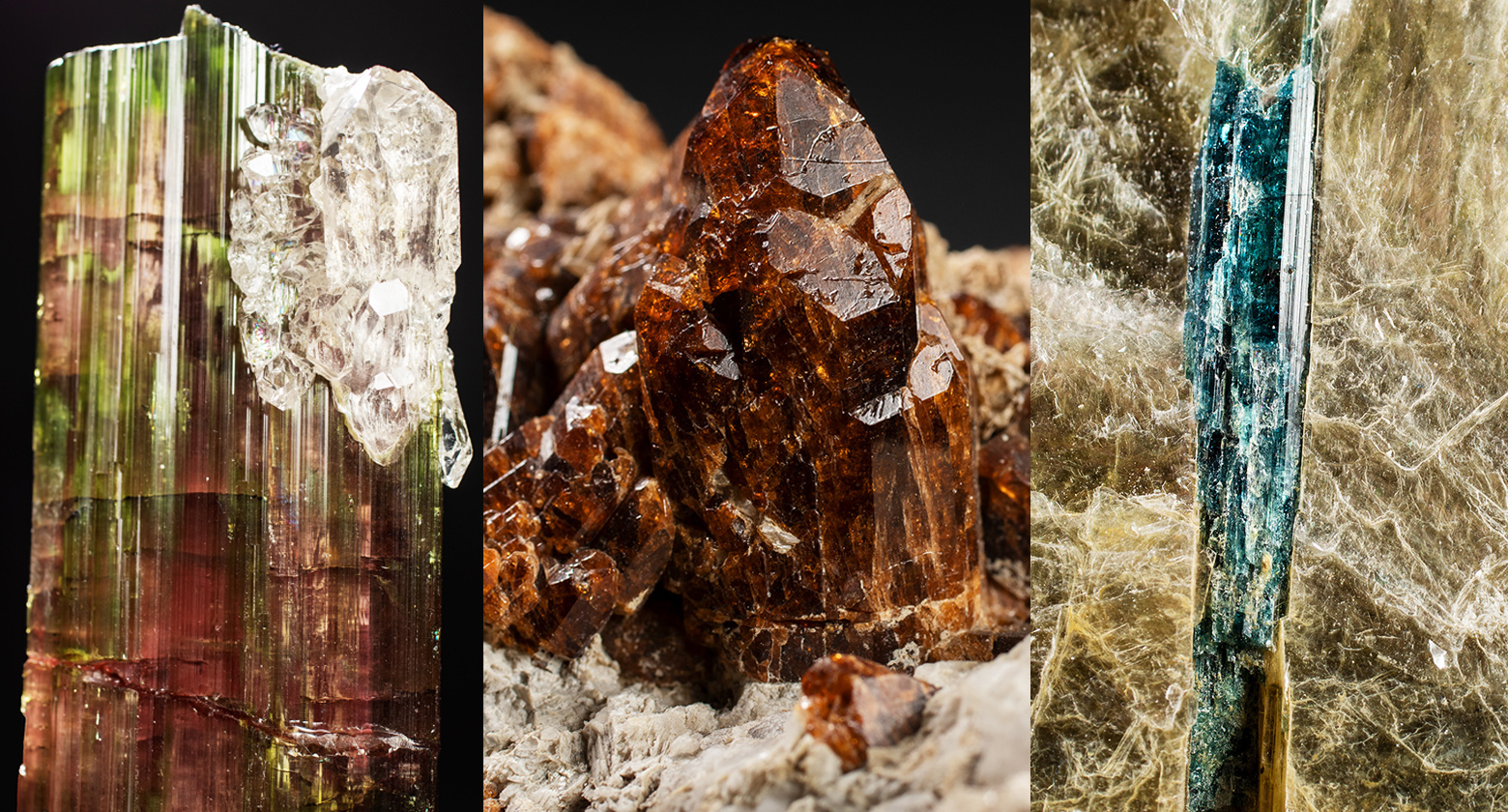 A selection of minerals from the family of tourmaline. ©NHMU

Tourmaline is a favorite of mineral collectors, gemstone collectors, and anyone who loves colorful semiprecious gemstone jewelry. It is often found in transparent crystals that have bright colors and are large enough for display, for faceting into gemstones, and even for carving. Exhibits on the third floor of the Natural History Museum of Utah include a variety of raw tourmaline specimens, jewelry, and carvings, but there are many more tourmaline specimens stored safely away in display drawers in the Museum's Earth Lab as well as the secure collections cabinets. In this article, we're happy to show you some of those colorful Tourmaline specimens from NHMU's collections and teach you more about this beautiful group of minerals.

A Family of Minerals

But before we look at beautiful specimens, let’s learn a little bit about tourmaline. Tourmaline is not a single mineral, but instead is a group or family of minerals that all have the same crystal structure but different atoms that fit into that structure. For example, the mineral dravite has the chemical formula Na(Mg3)Al6(Si6O18)(BO3)3(OH)3(OH). Fluor-dravite has the same formula except the (OH) on the end is replaced by F (fluorine). Other tourmaline minerals have other atoms such as K, Mn, Fe and Li in the place of some or all of the Na, Mg and Al. This accounts for the wide range of colors of tourmaline minerals, yet all have a hardness of 7.5 on the Moh’s hardness scale, which is hard enough for use as gemstones. Image 2 ©NHMU
Because elbaite is usually found as transparent and very colorful crystals that are large enough to cut into gemstones, it is the variety of tourmaline most people are familiar with. It is named after Elba, Italy where it was first found and described. Most commonly found in red, pink or green, it can also be blue or gray and in a variety of shades from pale to intense.

But, one of the most special characteristics of elbaite is that it can have multiple colors in the same crystal, often red or pink with green. When this happens, the stone is referred to as “watermelon” tourmaline. Image 2 shows an elbaite crystal that is green at the base and grades to red near the tip of the crystal. This one is also from Minas Gerais, Brazil. This crystal was formed in an open space or cavity in the rock  where the crystal had been able to grow freely into the open space in the cavity. That is why the crystal is so perfect.

Image 3 shows a cluster of elbaite crystals from Minas Gerais, Brazil  where smaller crystals grew out of the side of a group of larger crystals. Image 4 ©NHMU
Elbaite tourmaline crystals are found intergrown with or associated with other minerals, especially quartz, mica and feldspar. Image 4 shows a giant elbaite watermellon tourmaline specimen coated with feldspar crystals. This elbaite is about 30 cm long, red in the interior and green on the outside, and estimated to contain more than 3500 carats of gem quality material. Sometimes elbaite crystals form in sunbursts frozen in lepidolite mica as shown in Image 7. This specimen was collected in the Stewart Mine near Pala, California. Quartz crystals often grow on the surface of elbaite crystals (Image 8) and sometime enclose the end of the tourmaline crystal, almost like a lollypop (Image 9). Not all tourmaline minerals are transparent with bright colors. Although it can be green or yellow, dravite and fluor-dravite are typically brown. Image 12 shows a dravite specimen from the famous locality at Gouverneur, New York. Image 13 shows a specimen of schorl from another famous locality at Pierrepont, New York. Schorl is always black and is one of the most common tourmaline minerals, even occurring at a couple localities in Utah. If you wish to explore more spectacular photos of some of the best tourmaline specimens in the world, visit Mindat.org and search for tourmaline or any of the individual tourmaline minerals.

Dave Richerson is the mineralogy collections manager at the Natural History Museum of Utah. He is a retired associate professor of material science and engineering at the University of Utah. He is the author of the books "Modern Ceramic Engineering" and "The Magic of Ceramics," co-author or co-editor of five other books, and author or co-author of more than 100 technical and educational articles and reports. NHMU is part of the University of Utah in Salt Lake City. Our mission is to illuminate the natural world and the place of humans within it. In addition to housing outstanding exhibits for the public, NHMU is a research museum. Learn more.