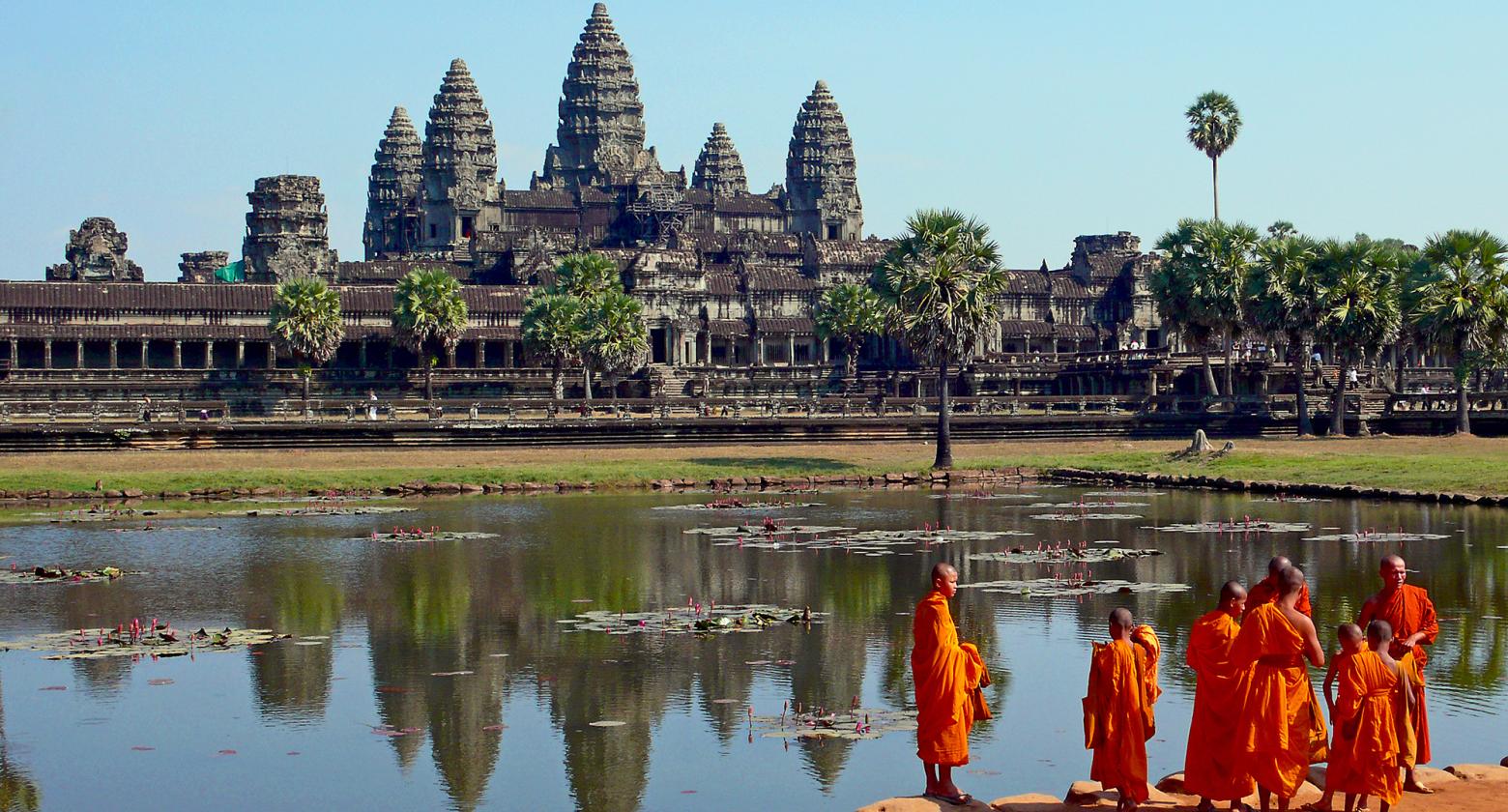 Angkor: Empire of Cambodia is now open at NHMU through April 23, 2023.

Angkor is a vast complex of temples and other archaeological structures rising out of the jungle in northern Cambodia. It covers an astonishing 400 square kilometers, or 154 square miles. To put this in perspective, this is an area equivalent to the entire eastern half of Salt Lake City from 600 North to I-215 in the south. This massive site was the home to arguably Southeast Asia’s greatest civilization, the Khmer Empire, from the 9th to the 15th centuries. A comparison of the Salt Lake Valley and Angkor.
The Khmer people emerge during a time when Southeast Asia was described as being part of “Greater India.” Indian influence – particularly Hindu – pervades Angkor. The Khmer kings who ruled there were considered divine Hindu rulers and this capital city was a religious center as much as a political one. There are 72 major temples in Angkor and several hundred minor temple sites. Some of these eventually served as mausoleums for the kings, much like the pyramids in Egypt.

The largest of all the temple sites is Angkor Wat – in fact, it is the largest religious monument in the world, covering 400 acres. Angkor Wat was built as a re-creation of the Hindu universe; its five sandstone towers rising above the four temple enclosures represent the peaks of Mount Meru, the center of the Hindu universe. It was dedicated to the god Vishnu when built and contains a stunning amount of religious art.

But the Khmer people were never completely Hindu. King Jayavarman II (802–869), the first Khmer king of the Angkor Empire, proclaimed himself Hindu god-king but was very supportive of Mahayana Buddhist influence throughout his kingdom. A succession of tolerant Hindu kings allowed the peaceful co-existence of Buddhist traditions alongside Hindu ones. By the end of the 12th century, the Khmer Empire had become decidedly Buddhist. Temples were repurposed from Hindu worship to Buddhist worship, and carvings and artwork from these centuries increasingly depict the Buddha rather than Hindu gods like Shiva, Vishnu and Ganesh. Detail from a sandstone carving in the NHMU exhibit Angkor. Photo: Michael Mozdy

Many of us can conjure popular culture images of Angkor in our minds thanks to movies like Disney’s animated Jungle Book and, more recently, Lara Croft: Tomb Raider. At Angkor, you will see stunning orchids and wild ginger flowers on your way to the temples where “Thitpok” trees (Tetrameles nudiflora) and strangler figs (Ficus gibbosa) drape their roots down the intricately carved buildings, contributing to both the beauty and the erosion of the site’s treasures. You may even see long-tailed macaque monkeys and giant fruit bats (although likely not King Louis the orangutan).

And in the midst of this verdant land, the temple complex contains buildings and an array of habitations and cultural artifacts that date from the 800s to the present. Archaeologists have just begun to understand the genius of Angkor thanks to aerial LIDAR pictures that reveal the complex system of man-made lakes, canals, and rice paddies. Understanding and guiding water enabled hundreds of thousands of people to prosper in a region that has drought for 6 months of the year and then a heavy monsoon season.

An 18-foot wide LIDAR reconstruction of Angkor is displayed in NHMU’s Angkor exhibit. These laser-derived images effectively strip away the vegetation of an area and reveal how humans have interacted with the earth. Photo: Michael Mozdy.

Ultimately, however, the size and scope of the city amid such a challenging natural environment led to its demise. A series of drought years, wars, and other social pressures forced the Khmer to move their capital to the south. Angkor fell into disarray and neglect in the 16th century.

Importantly, Ankgor was never truly abandoned. Villages exist throughout the area and people continue to venerate the temple deities and organize ceremonies and rituals in their honor. This means that Angkor is not a “lost jungle city” as popular imagination would have us believe. It is a window into a rich past but also a living space where people carry out a way of life directly related to their Khmer ancestors. Today, millions of tourists add to the complexity of preserving and recognizing the architectural and cultural treasures of Angkor. Guests explore Angkor at NHMU. ©NHMU
From October 22, 2022 to April 23, 2023, NHMU is offering visitors a thrilling peek into Angkor. The exhibit displays stunning images alongside priceless objects from the Khmer culture. On loan from MuseumPartners, this exhibit was developed in close collaboration with the Cambodian National Museum. In fact, four Cambodian museum specialists came to Utah to help unpack and display these objects. Only a few of the carvings are replicas – most are the actual carved sandstone and cast metal pieces that display a painstaking craftsmanship from 1000 years ago. In addition to these fascinating objects, don’t miss the video content where historians, archaeologists, and linguists explain the magnificent cultural diversity contained at Angkor. Learn more about the exhibit and prebook tickets here.