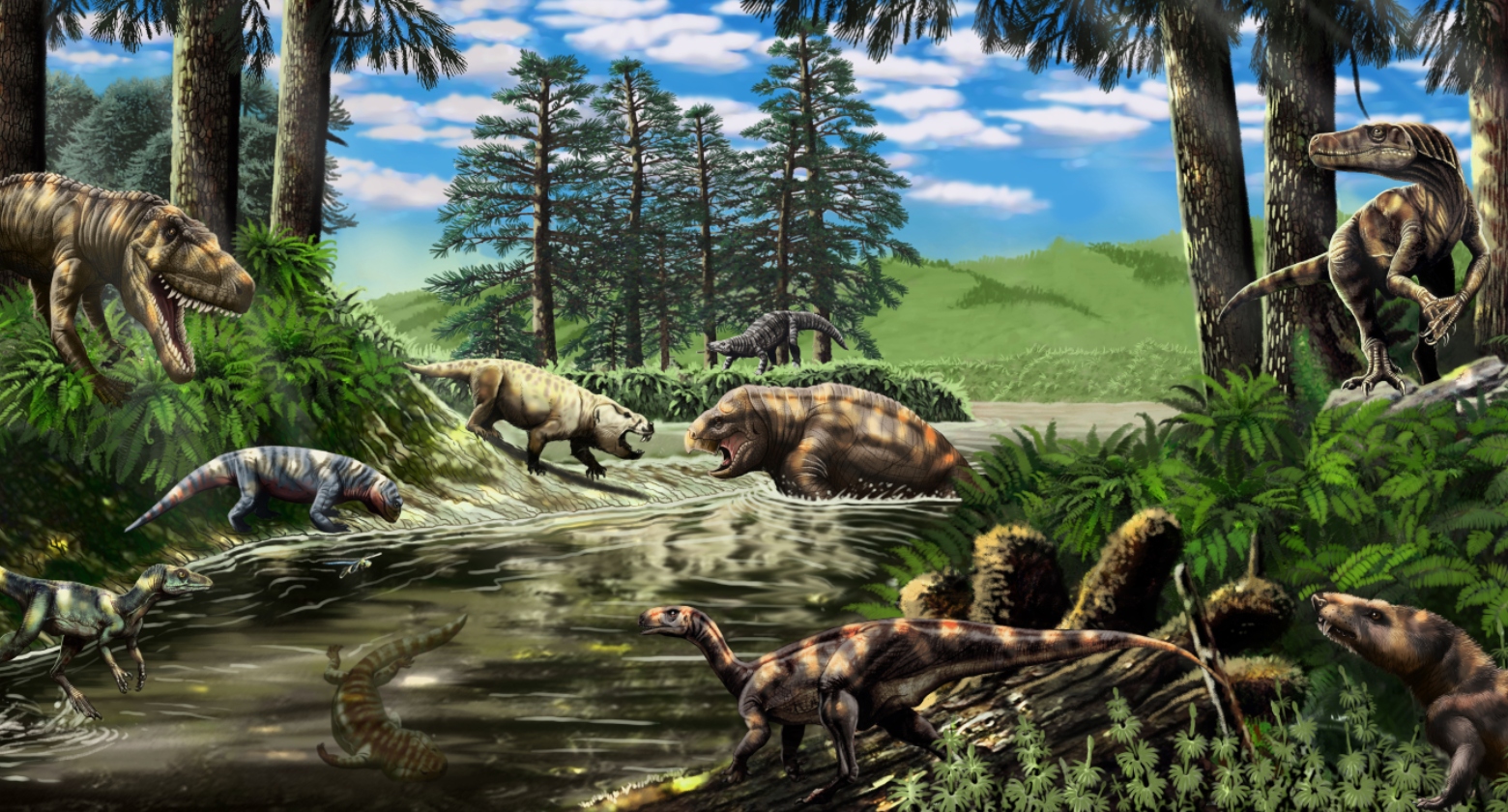 The tale of Deep Time is one of change. Life evolves into incredible forms, species become extinct, and climates shift through the ages. In fact, these changes are often related to each other – global climate change, after all, can greatly affect which species survive, which become extinct, and which evolve in new ways. But how can paleontologists detect these connections during time periods millions of years in the past? It’s a tricky problem, and one at the heart of a new paper by paleontologist Adriana Mancuso, Natural History Museum of Utah Chief Curator and University of Utah Associate Professor Randall Irmis, and colleagues.

The rock record of western Argentina hosts some fantastic fossiliferous rocks, especially from the later part of the Triassic Period that spanned about 231 to 225 million years ago. Paleontologists have uncovered early dinosaurs, ancient relatives of mammals, archaic crocodile cousins, strange beaked plant-eating reptiles, and more in these strata. “This basin in northwest Argentina has one of the most complete Triassic non-marine records in the world,” Irmis says, “and is internationally famous for its fossils.” On top of that, geologists have learned a great deal about the climate in the region during the Late Triassic through studies of ancient soils, their geochemical make-up, and other techniques. Inspired by the research of another NHMU scientist, Curator of Archaeology Tyler Faith, the authors of the new paper were inspired to investigate how patterns in the fossil record relate to climate change during the the first chapter of the Age of Reptiles. In the new Frontiers in Earth Science study, Mancuso, Irmis, and colleagues bring these various threads together to investigate how shifts in the climate affected the various creatures who lived in Triassic Argentina.

Earth looked very different during the Triassic. Most of the world’s landmass was bound together in the supercontinent Pangaea. There were no flowering plants – some of the plants during this time were relatives of today’s horsetails, ferns, conifers, and ginkgo trees . And, of course, there were many unfamiliar creatures ranging from sharp-toothed dinosaurs to protomammals that looked something like pigs with beaks. All of these organisms could have affected by climate change – such as shifts in temperature and rainfall – but the question paleontologists keep coming back to is “How?” By drawing from discoveries and analyses related to both Triassic life and indicators of Triassic environments, the researchers have created a new outline of what the world was like in Argentina’s Ischigualasto-Villa Unión Basin.

The fossil record is not complete. Of all the creatures that ever lived, only a fraction were ever preserved as fossils – and only a fraction of that fraction have been discovered by paleontologists. “Many apparent changes in the fossil record can be a result of different biases,” Irmis says, ranging from how abundant a fossil species is to the research questions of scientists that determine what they collect. If a species in the fossil record is rare, for example, paleontologists have to ask themselves whether that species really was uncommon or if there’s some other factor – like poor chances for preservation, where paleontologists look for fossils, and so on – might be creating the wrong impression. In some geologic formations, for example, there large gaps in the layers where fossils are found, meaning it can be challenging to track their responses to environmental change.

Still, Mancuso, Irmis, and colleagues were able to find a few connections between ancient climate shifts and Triassic life. “Even though we don’t see any major link between faunal change and paleoclimate change, that doesn’t mean there wasn’t a relationship,” Irmis says. It may be that researchers have yet to detect the key evidence about how climate affected Triassic species. Nevertheless, the new study was able to detect some subtle shifts. Reptiles called pseudosuchians – the distant ancestors and relatives of today’s crocodiles and alligators – seemed to fare better and be more prominent on the landscape in areas that were warm and dry. This seemed to be true for reptiles called rhynchosaurs, too – plant-eating reptiles that were especially abundant during warm and dry times but became rarer as humidity rose.

But the story doesn’t end here. There is still plenty for researchers to dig into. “Regardless of study area or time period,” Irmis says, “it really shows the importance of developing fossil datasets with large sample sizes and precise geologic information that can be compared with quantitative estimates of paleoenvironmental conditions.” The more geologists and paleontologists can recognize the ways in which our knowledge of the fossil record is incomplete, the better we can understand big picture changes in the prehistoric past.

Riley Black is the author of The Last Days of the Dinosaurs, Skeleton Keys, My Beloved Brontosaurus, and is a science writer for the Natural History Museum of Utah, a part of the University of Utah in Salt Lake City. Our mission is to illuminate the natural world and the place of humans within it. In addition to housing outstanding exhibits for the public, NHMU is a research museum. Learn more.