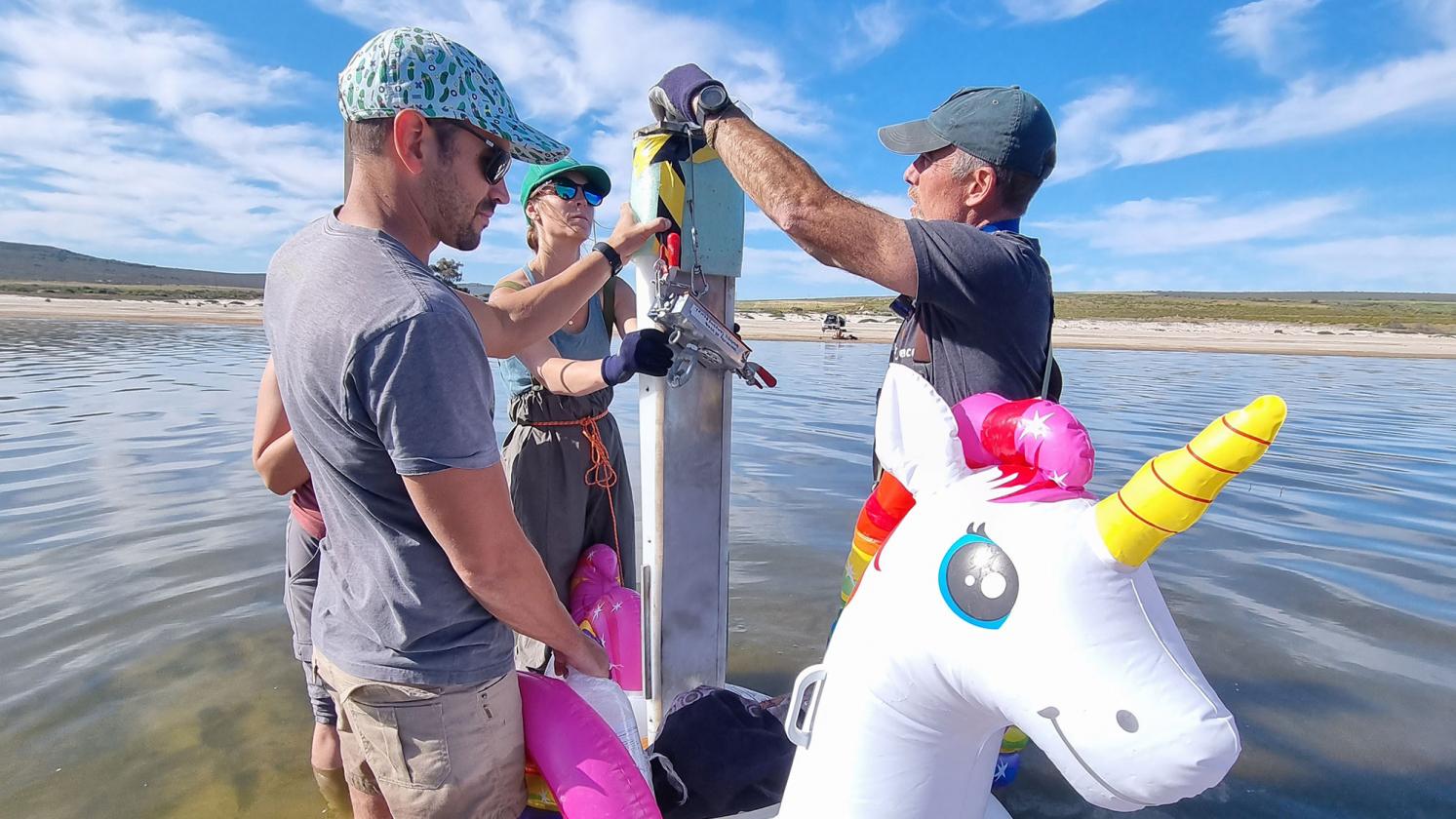 Sparkles the unicorn featured in one of the winners of the #ScientistAtWork photo contest sponsored by the scientific journal Nature. Photo by Lynne Quick.

By Lisa Potter, research communications specialist at the University of Utah

In September 2022, Lynne Quick, senior researcher at Nelson Mandela University, took a break to snap a photo of her collaborators doing fieldwork in South Africa using Sparkles the inflatable unicorn, “an excellent and hilarious stable floating platform to operate the freeze-corer from,” Quick said. The image is now famous as a winner of #ScientistAtWork, a photo contest run by the science journal Nature.

The whole team is featured in the winning image above, from right to left: The elbow of Kathryn Sokolowski, anthropology master’s student; Tyler Faith, associate professor of anthropology and curator of archaeology at the Natural History Museum of Utah; Stella Mosher, geography doctoral student; Mitch Power, professor of geography and curator of plant collections at NHMU; and of course, Sparkles the inflatable unicorn. Photo by Tyler Faith
“Our second-best field assistant that sadly did not feature in the Nature photo was Sprinkles, the inflatable T-Rex,” lamented Quick.

The photo captured the scientists collecting data to understand how climate and human activity have shaped terrestrial ecosystems on the west coast of South Africa, a global biodiversity hotspot. Specifically, the project focuses on past fire regimes.

Fire is an important management tool because the region’s vegetation depends on it to maintain biodiversity. However, decades of fire suppression and landscape transformation have obscured the natural wildfire cycles that kept the ecosystem healthy. To inform today’s land management practices, Mosher’s doctoral project aims to understand how fire regimes have changed over the past 4,000 years by taking sediment cores from Verlorenvlei wetland and lake. The cores are a precise record of all the material that washed into the lake from the surrounding environment in chronological order—oldest at the bottom, most recent at the top. They can then analyze each layer of sediment for charcoal and other evidence that signals wildfires.

“We’re finding that fire activity has been highly variable over thousands of years,” said Mosher. “The next step is to pair the fire history record with other proxies for ecosystem change, like fossil pollen, so that we can start unpacking relationships between climate, vegetation, fire and human activities.” Photo by Lynne Quick.
The researchers used a technique called freeze coring, a process that freezes core samples in the field to better preserve the uppermost sections of the sediment. Freeze coring required the team to haul a cooler full of dry ice and ethanol 100 yards into the lake. Quick’s solution was Sparkles.

“I bought the unicorn floaty for an earlier fieldwork campaign in a small town called Gansbaai along the southern cape of South Africa,” said Quick, who is Mosher’s doctoral advisor along with Faith and Power. “We needed a floating platform positioned on the lake and a way to transport team members from the platform to shore. I named her Sparkles. She gets the job done.”

The photo captures just one day of an epic fieldwork saga that took a multinational team from Spain, France, the U.S. and South Africa across several field sites in the region. Mosher’s research focuses on one component that will reconstruct the past environment for the last 4,000 years.

“This is a particularly interesting time period for us because it encompasses the arrival of pastoralists and their livestock 2,000 years ago—which may have led to novel human-driven fire regimes—as well as major landscape alteration during the colonial era,” said Faith. “The work shown in the photo is part of an effort to get a finely resolved record of more recent fire regimes.”

This article was written by Lisa Potter, research communications specialist at the University of Utah. It first appeared on @TheU and can be seen in its original posting here.