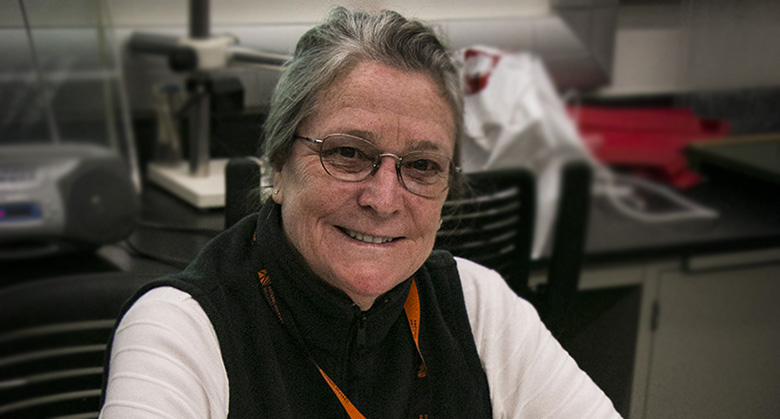 NHMU is home to the Garrett Herbarium, which is the state's official store of plant specimens. We have been collecting specimens for well over a century - and we now have more than 135,000 of them mounted on herbarium sheets (read Decoding a Herbarium Sheet to see one). A big challenge for us and for museums around the country is to bring our physical collections into the digital age by creating online database records for all of these specimens. We outlined how we're meeting the challenge in Digitizing our Herbarium Collection, and now we must acknowledge some of the hard work it has taken to get here. We couldn't be where we are today without the work of Martha Maezumi, who has been tirelessly working on this project since 2014. Here is her story.
Martha has only been in Utah since 2011, joining her youngest daughter, Yoshi, who just received her Ph.D. in paleo-ecology from the U in 2015. Yoshi worked with NHMU’s researcher and Herbarium Curator, Mitch Power, and she introduced her mother to the idea of working here.
Martha has four degrees: an AA in Fine Arts, a BA in Religious Studies, a BA in Anthropology, and an MA in cultural Anthropology. While pursuing her Master’s, she met her husband, a visiting Japanese Buddhist priest at Northridge University. She spent her younger years visiting Zen Buddhist temples in Japan with him, raising her three children close to the Zen Mountain Center where her husband was the head priest, working at a number of jobs in her small California town of Idlewild, and keeping up with her own artwork.
Martha’s art is fascinating – she illustrates animals from the Asian zodiac, often as wedding presents for couples, as well as the verbal puzzles known as koans. Despite her many college degrees and long work history, like many in her generation Martha had no experience working with computers. When she was looking for work here in Salt Lake City, she encountered Salt Lake County’s Senior Community Service Employment Program (SCSEP), which helps to place seniors in jobs where they can learn new technology skills.
Martha began working at NHMU three years ago, first in the Paleo Lab, and then with museum administration and the gallery programs folks. But eventually she found her way to the Herbarium, and thankfully stepped up to learn the data entry skills needed to help us digitize our collection.
“She’s been just amazing – she’s indispensable!” enthuses Johnson. Indeed, she has personally digitized nearly 3,000 specimens for the museum and barcoded about 20,000 sheets. Martha Maezumi
We’ll be sad to see Martha leave us in September of 2016, although she’s moving back to California for a great reason: to be with family and return to her artwork. We wish her well and thank her for all of her help.
Michael Mozdy is a Digital Science Writer for The Natural History Museum of Utah, a part of the University of Utah in Salt Lake City. Our mission is to illuminate the natural world and the place of humans within it. In addition to housing outstanding exhibits for the public, NHMU is a research museum. Learn more.
Blog Author:
Michael Mozdy
Category: People
Tags: botany, celebrating women in science