This was the Place: Athabaskans Gambling on a New Life in the South 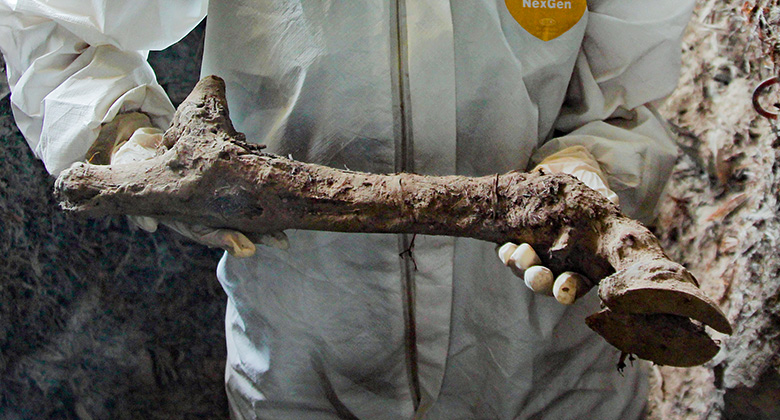 First excavated in 1930-31 by Julian Steward, the Promontory Cave moccasins on display at the Natural History Museum of Utah offer a glimpse into a culture in transition. The moccasins are completely unique compared to the other moccasins of the time found in the Great Basin region, like hock moccasins and Fremont moccasins. One hypothesis is that these belonged to Dene or Athabaskan people migrating southward from Canada. Read the full story of the Promontory moccasins in The Promontory Culture: Subarctic Canadian People Living in Utah Caves, and the story of how NHMU brought them back to life in Alcohol, Leather & Time.
Jack Ives, an archaeologist from the University of Alberta, Canada, was curious to explore the Promontory Caves. He began working with the NHMU collections to test the hypothesis that the people who inhabited the caves at the time of the moccasins, from 1250-1290 A.D., were in fact subarctic Canadian peoples as the moccasins suggest.
During that initial work, Ives asked NHMU’s Chief Curator, Duncan Metcalfe, about the possibility of seeing the Promontory caves first hand. With BYU colleague, Joel Janetski, the two archaeologists met the land owners of the area where the site is located, George and Kumeroa Chournos. With the support of the Chournos family, Ives and Janetski started their own excavation in 2011. Ives recovering a moccasin in Promontory Cave 1. Photo: Grant Smith.
Ives decided to excavate towards the front of the larger Cave 1, adjacent to Julian Steward’s original dig. This area was mounded higher than the rest of the cave floor. They soon found that they had stumbled upon a large midden area. While the Promontory Culture layer of artifacts Steward found was about 60 cm thick, Ives continued to uncover Promontory Culture artifacts through two meters of excavation before encountering deeper but sparse traces of 5,000 year old human habitation. Meanwhile, Janetski began work on the longer record of occupation in Cave 2, which had its own Promontory Culture deposits as well as a deeper record extending more than 8,000 years into the past.
When Ives finally reached the bottom of the midden area at the front of Cave 1, they found that the cave floor there would actually have been a depression at the outset in the 13th century. Steward’s main excavation focused on a hearth area centering on the large open area near the front of the cave, the perfect place for daily living and communal activities like feasting. The thick deposits at the very front of the cave likely were created as worn out moccasins, bones from meals, and other items were discarded nearer the hearth, and then cleared away to maintain that prime living space.

Animal bones, mostly bison, but also including antelope, elk, deer and sheep, were common in the Promontory Culture deposits, sometimes occurring in piles resembling bone beds. “These people were extremely effective large game hunters,” enthuses Ives, “specifically with bison. They were the cream of the crop.” Recovering a bison skull in the Promontory Cave 1 excavation. Photo: Reid Graham.
Their prowess at big-game hunting stands in stark contrast to their Fremont neighbors, who were primarily foragers, having mostly abandoned agriculture during a time of great drought in the 12th century. Some dense concentrations of the bones Ives’ crew found had been burned while still containing fats and greases—valuable sources of energy in a diet, and important in preserving dried meat in pemmican. It is possible that these are the remains of feasts during times of plenty.
More surprisingly, like Steward, the Cave 1 crew discovered many gambling devices: split cane dice, hoops and feathered darts, and decorated sticks and bones. “We recovered cane dice at a huge rate,” says Ives, “up to 50 dice per cubic meter,” which by any standard indicates a high degree of gambling.
Important to Ives’s hypothesis on the origins of the cave inhabitants, the gambling pieces resembled those from a vast area of western North America. Cane dice are similar to ones found throughout the Southwest, but seldom in the Great Basin. A die made of sinew wrapped around a beaver tooth is strikingly similar to those used by the Klamath and other peoples of the Northwest Coast. The hoop game has been found from the Great Plains to the Colorado Plateau. A doctoral student and collaborator on the dig, Gabriel Yanicki, tells Western Digs “A spiral-incised stick looks similar to objects used in a guessing game played by a number of peoples in northern British Columbia.” (For an excellent discussion of the gambling find, read this article from Western Digs).

Peace and Prosperity Through Gambling

The artifacts from the Promontory caves are from a brief period of time, representing just one or two human generations in the 13th century. According to Ives, the Promontory record is consistent with what archaeologists would expect for people migrating southward from their Canadian homes. Ives calls them Apachean people, or ancestors of the Apache and Navajo people. “Throughout prehistory, people from the Plains periphery have been attracted to the communal bison hunting lifestyle, and Apachean ancestors were no different in this regard,” he explains. The Promontory Culture reflects an effective bison hunting group that began hunting bison on Promontory point, where bison populations were greater in the mid-1200s.
As the drought of the late 1200s took its toll on plant and animal life, the Promontory Phase people moved on, and it is reasonable to think one of their next stopping points lay with the Promontory Phase sites around Utah Lake in Utah Valley, where much of Janetski’s earlier research took place.
For a culture in transition, new to areas occupied by other peoples, the inevitable social interactions fall into a range of options from competition and war to efforts to co-exist peacefully. The gambling artifacts suggest an interest in bridging the two alternatives.
Yanicki provides an interpretation: “The propensity of the Promontory people for gaming signifies a genuine interest in engaging in peaceful interactions with neighbors extending over the far-flung area in which they ranged.”
The gambling games were ways for women to interact socially with low risk, but the games of skill the men played, like the hoop game, could involve significant risk and wagers. Ives and Yanicki suggest that this could have been a way for a thriving culture new in the area to build ties with an indigenous culture facing increasingly stressful times. Small hoop made from juniper bark found in Promontory Cave 1. Archaeologists think these were used in dart-like games of skill. Photo: Jack Ives.
“The Promontory Phase people were excellent big game hunters, were well clothed and fed, and engaged in social interactions with their neighbors as the gambling artifacts show,” offers Ives. Yet at the same time, the Promontory Culture peoples used pottery (unlike their subarctic Canadian Athabaskans), something characteristic of the Great Basin, along with basketry and gambling implements borrowed from other cultures. “In my mind, this record is consistent the presence of ancestral Apacheans, adapting to a new landscape and new cultures around them,” he adds.
Ives is a gregarious, knowledgeable, and fast-talking researcher. His work is thorough and his well-supported hypotheses are extremely provocative for archaeologists and lay people alike. What’s more, he’s appreciative to have worked on this site. “This is one of the more remarkable sites in western North America,” he claims in a charming, self-effacing (and typically Canadian!) way, “and it’s been a career high to work in such a beautiful place with the Chournos family, representatives of the Northwest Shoshone Tribe, and Athabaskan speakers in Canada and the United States.” Jack Ives (far right) at the Promontory Cave site with Bruce Starlight (second from left, back row) of the Tsuut'ina Reserve, an Athabaskan or Dene speaking group outside of Calgary, Alberta, linguist colleague Sally Rice (center back), the land owners George and Kumeroa Chournos (beside Ives), and Patty Timbimboo of the Northwest Shoshone Tribe.
NHMU and Dr. Ives would like to thank George and Kumeroa Chournos for their support and hard work in making the Promontory caves available for archaeological research. Once analysis and reporting is completed, the artifacts Ives and Janetski have recovered from their more recent Promontory research will be deposited with NHMU collections, uniting them with Steward’s 1930s material.
Don't miss our entire series on NHMU's Promontory moccasins:

Michael Mozdy is a Digital Science Writer for The Natural History Museum of Utah, a part of the University of Utah in Salt Lake City. Our mission is to illuminate the natural world and the place of humans within it. In addition to housing outstanding exhibits for the public, NHMU is a research museum. Learn more.
Blog Author:
Michael Mozdy
Category: Collections
Tags: archaeology

A Strange and Mysterious Insect Was Found in Museum Collections First

The Museum's Wall of Wonders

The massive Collections Wall is united by the theme of...
Posted January 30th

Historic Photography of Native Americans of the Southwest

NHMU is home to a collection of historic lantern slides photographed by Horace S. Poley around the turn of the 20th...