Science beyond the headlines 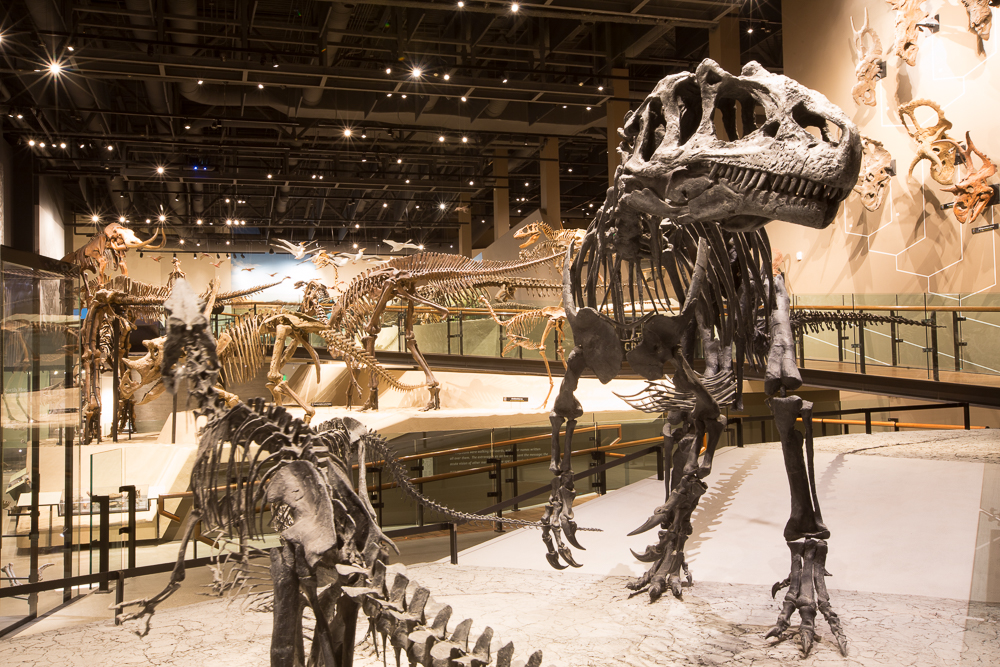 A reconstructed Allosaurus in our Past Worlds Gallery, based on bones found at Cleveland-Lloyd Dinosaur Quarry. © NHMU.
By Randall Irmis
A Newsweek headline yesterday stated that the mystery of how the Cleveland-Lloyd Dinosaur Quarry was formed had “finally been solved by scientists.”
The article went on to explain that in fact nothing so conclusive had been determined.
The Cleveland-Lloyd Dinosaur Quarry, located about 50 miles south of Price, Utah, is famous for preserving over 10,000 bones of the carnivorous dinosaur Allosaurus and other animals, and an enduring mystery is how this bonebed came to be.  The vast majority of bones that have ever been excavated from this site are in our paleontology collections right here at the Natural History Museum of Utah.
In our Past Worlds Gallery we have an exhibit that discusses different hypotheses about why so many dinosaur bones were deposited at Cleveland-Lloyd.
The goal of the Cleveland-Lloyd exhibit is to exemplify the importance of multiple working hypotheses in science, and that these are hypotheses that are iteratively tested as existing evidence is re-evaluated and new evidence is brought to bear on the question.  We can never fully "prove" a hypothesis, just falsify those that clearly don't fit the available evidence.
In the case of the new research out this week, the paleontologists involved in the study have provided new evidence that suggests the ‘bloat and float’ hypothesis concentrated the bones at the site. I agree that bloat and float is probably the best hypothesis we have at present, but does that mean we need to revise our exhibits? Don’t worry – you’ll still be able to vote with a penny for your favored hypothesis, because we’ll continue to present multiple hypotheses and the evidence that support each one. We can never fully prove that one idea is unassailably correct, and even if we’re all happy with ‘bloat and float’, as my colleague Mark Loewen pointed out, it is a great explanation for how the bones were preserved, but doesn't explain how the animals died upstream.
At the Natural History Museum of Utah we will continue to spread that message about how science works.  The latest scientific study on any topic is often touted as "proof", but this misrepresents how science works--that's why we hope you will to come to the Museum and see the Cleveland-Lloyd exhibit to learn about the real scientific method as it applies to a 150-million-year-old murder mystery.
The study referenced by the Newsweek article presents valuable new and fascinating information that is part of our on-going effort to understand the natural world. As is often the case, the headline writers may have gotten a little too excited!
You can read more about the new research by the summary provided by Newsweek, and the original scientific paper is freely available here.
Want to investigate the Cleveland-Lloyd mystery yourself?  After checking out the evidence here at NHMU, head down to the site where the Bureau of Land Management maintains a visitor center and you can see real dinosaur fossils still in the rock.
Randall Irmis is the curator of paleontology at the Natural History Museum of Utah, a part of the University of Utah in Salt Lake City. Our mission is to illuminate the natural world and the place of humans within it. In addition to housing outstanding exhibits for the public, NHMU is a research museum. Learn more.
Blog Author:
Randall Irmis
Category: Collections, Research, Spaces
Tags: paleontology