How to Prepare a King 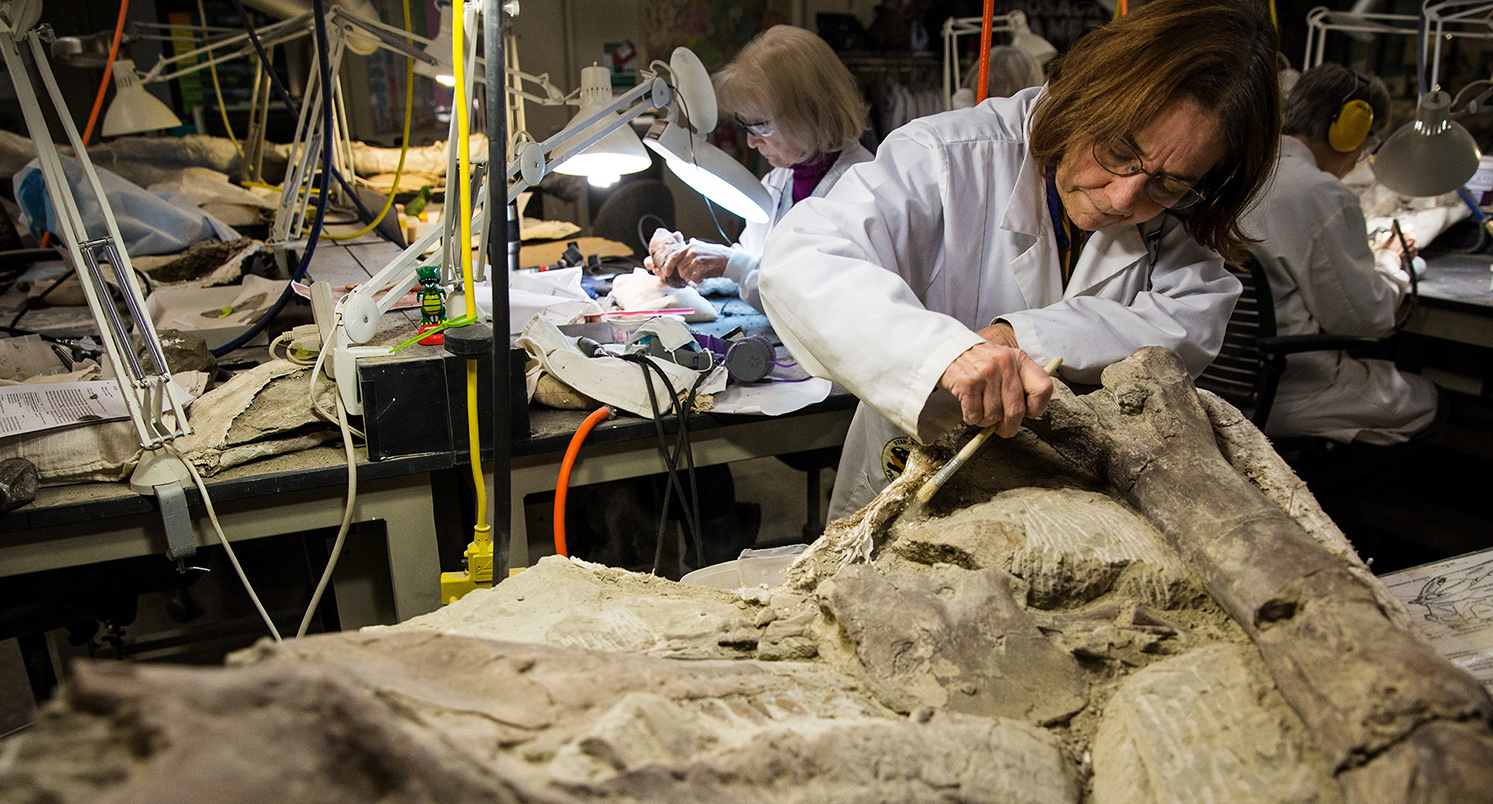 Ann Johnson working on the skull. Photo © NHMU.
By Brian Switek
If you’ve wandered by the fossil prep lab windows in the Past Worlds gallery lately, you might have noticed someone looking back at you. No, not one of the staff or volunteers, but a dinosaur that’s been dead for about 75 million years.
The skull belongs to Teratophoneus curriei, a tyrannosaur who stalked what’s now Grand Staircase-Escalante National Monument back in the Late Cretaceous. The googly eye delicately placed among the bones is a way to indicate which of the many holes in the skull used to house the eye in the living animal. But even getting this spectacular fossil into such a presentable state was an immense undertaking itself. Natural History Museum of Utah volunteer Ann Johnson carefully removed the stone to give us a better look at this prehistoric terror.
Fortunately, due to the fact that much of the dinosaur’s skeleton was recovered from the site, “It looked like the skull was going to be pretty complete right from the start,” Johnson says. The question was what condition all those delicate bones were going to be in. Skulls aren’t single bones, but a framework made up of many elements. In dinosaurs, especially, these bones can be very thin and delicate. They require much more care than some other, sturdier parts of the skeleton. “I was a little nervous about the potential for damage because the femur was laying across it and it had some rather large tree roots growing through it,” Johnson says, but those worries turned to excitement as she began to dig in.

Ann Johnson working on the skull.
Ann's hand and arm are visible along with the skull.
Such important work couldn’t be rushed, though. After some preparation with a hand tool called an airscribe, a hammer, and a chisel, Johnson says, she picked a different kind of hardware to handle some of the fine details. “I switched to a very small carbide pin working under the microscope to prepare the teeth, eye orbits, and other delicate structures and the detail finishing of the bone surface.” Among other challenges, Johnson notes, “the serrations on the teeth are challenging to clean.”
All that work has revealed Teratophoneus as never seen before, in no small part because one side of the skull was safely ensconced in rock and protected from the elements. When this better-preserved side started coming into view, Johnson says, “I thought ‘This is better than Christmas morning!’”
Of course, this is just the start. Preparation continues on the dinosaur’s skeleton and ongoing analysis may yield some previously-unknown secrets about this Cretaceous carnivore. “It is such a privilege to be chosen to prep this skull,” Johnson says, “and to, in a small way, be a part of the science that will surround this specimen for years to come.”
Brian Switek is the author of My Beloved Brontosaurus, Prehistoric Predators, and a science writer for the Natural History Museum of Utah, a part of the University of Utah in Salt Lake City. Our mission is to illuminate the natural world and the place of humans within it. In addition to housing outstanding exhibits for the public, NHMU is a research museum. Learn more.
Blog Author:
Riley Black
Category: Collections, People
Tags: paleontology

A Strange and Mysterious Insect Was Found in Museum Collections First

Get inspired from the man who spent a Year in Space discussing how to maintain physical and mental health, find inspiration, and...
Posted March 24th

NHMU's Youth Teaching Youth program is one of its great successes. Here's how it...