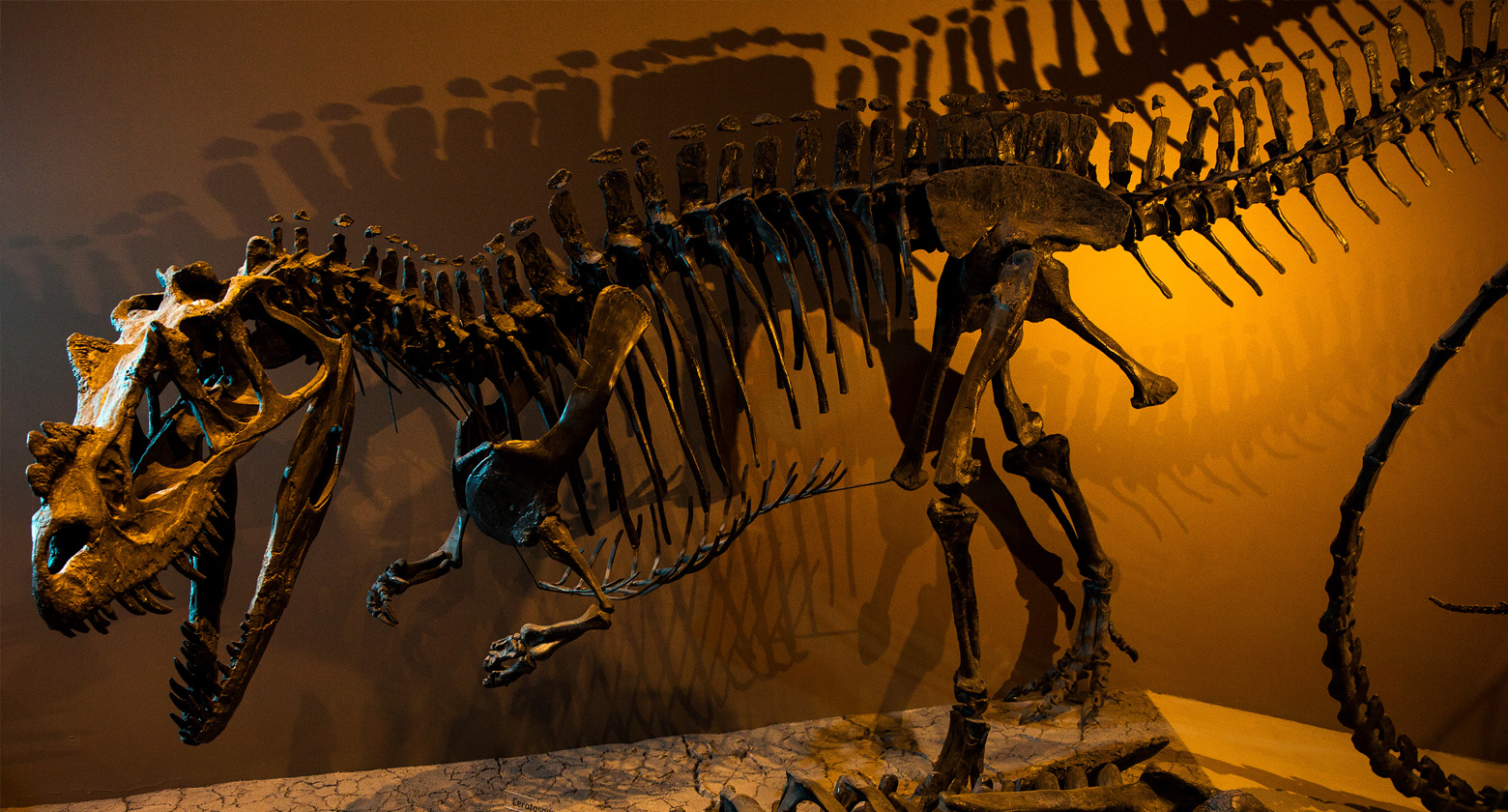 Ceratosaurus in the Museum's Past Worlds Exhibition. Photo © NHMU.
By Brian Switek
Stroll along the Past Worlds Exhibit in the Eccles Gallery and eventually you’ll meet Ceratosaurus. You can’t miss it. The reconstructed skeleton presents one of the gnarliest predatory dinosaurs of all time, immediately recognizable from the pointed horns over its eyes and the blade-like ornament on its nose. You’ll find it showing off its curved teeth to a pesky Marshosaurus trying to snag a snack of rotting Stegosaurus.
This roughly 150 million year old dinosaur isn’t unique to Utah. Bones of this Jurassic carnivore have turned up in Colorado, Wyoming, and even Portugal. But there are two facts that make our Natural History Museum of Utah skeleton special. Not only is our Ceratosaurus the first - and only - specimen to be found with bony armor that ran down its back, but it’s also one of the largest Ceratosaurus uncovered to date.
The very first Ceratosaurus known, uncovered in Garden Park, Colorado, was named by paleontologist Othniel Charles Marsh way back in 1884. That skeleton resides across the country at the Smithsonian National Museum of Natural History. Still, while certainly impressive, the first specimen is not especially large. In life it would have been about 18 feet long, and about half of that length was tail. Compared to Allosaurus - the most common carnivore of Late Jurassic Utah - Ceratosaurus seemed awfully tiny.
But there were bigger Ceratosaurus roaming around the Jurassic West. The specimen in the Museum’s collections - held behind the scenes in special cabinets for significant fossils - is one of them.
Found in Utah’s Cleveland-Lloyd Dinosaur Quarry during the 1970s and scientifically described in 2000, the Museum’s Ceratosaurus stands out. Part of its significance is that the various bones collected from the quarry seem to represent parts of a single skeleton. That might not sound remarkable at first blush, but Cleveland-Lloyd is a chaotic boneyard strewn with isolated bones from many species of dinosaur. Within that jumble, however, the Ceratosaurus bones grouped closely together and - given there are no duplicate bones - suggest the various parts represent a partial skeleton of a single Ceratosaurus. The Cleveland-Lloyd skeleton is quite a bit bigger than Marsh’s original. This Ceratosaurus stretches about 23 feet long and weighed more than half a ton. That helps put Ceratosaurus in the Jurassic heavyweight class with Allosaurus, and this only deepens the mystery surrounding this Jurassic carnivore.
Ceratosaurus wasn’t the only large predator stalking around the Late Jurassic floodplains of Utah. These were also the haunts of Allosaurus and the much rarer, but larger, Torvosaurus. These were the Big Three of Jurassic predators, their bones found together at places like Cleveland-Lloyd and even Dinosaur National Monument. The question is how three large carnivorous dinosaurs managed to slice up the same habitats?
Part of the answer might simply be a numbers game. Allosaurus was far more common than either of the other two predators. Just at Cleveland-Lloyd, for example, bones of at least 48 Allosaurus have been uncovered. The count of all the other carnivorous dinosaurs found there can be counted in the single digits. This might mean that Ceratosaurus was a much rarer dinosaur, that they usually lived in different habitats that didn’t favor their preservation, or was more of a specialist predator.
But stand on the Past Worlds walkway between the Ceratosaurus and the Allosaurus family and you’re bound to spot some big differences between the predators. Take their arms, for example.
The arms of Allosaurus were relatively short, fair enough, but their hands were elongate and tipped in three nasty-looking claws. Ceratosaurus, on the other hand, had puny arms that ended in four fingers with tiny claws (this despite having absolutely enormous shoulder blades). While the predatory habits of Allosaurus are debated, Ceratosaurus wasn’t catching anything with its little mitts. Whatever Ceratosaurus caught, it did so with a mouth full of terrible teeth.
Look at the tail, too, and you’ll see that the spines sticking up from the top of the tail bones - called neural spines - are much taller in Ceratosaurus than in Allosaurus. Why? It could be for more muscle attachments between the thigh bone and the tail, giving more power to the dinosaur’s legs, or there may be another explanation. The upshot is that in various proportions - from the shape of its teeth to its tail - Ceratosaurus was a very different carnivore than its neighbors. This might have been related to a preference for different prey, or maybe living in a different habitat, but one thing’s for sure. Gaze at the skeleton of Ceratosaurus and you’re looking at one of the most fearsome carnivores to ever walk the Earth.
Brian Switek is the author of My Beloved Brontosaurus, Prehistoric Predators, and a science writer for the Natural History Museum of Utah, a part of the University of Utah in Salt Lake City. Our mission is to illuminate the natural world and the place of humans within it. In addition to housing outstanding exhibits for the public, NHMU is a research museum. Learn more.
Blog Author:
Riley Black
Tags: paleontology