Find Your Place in the Human Family Tree 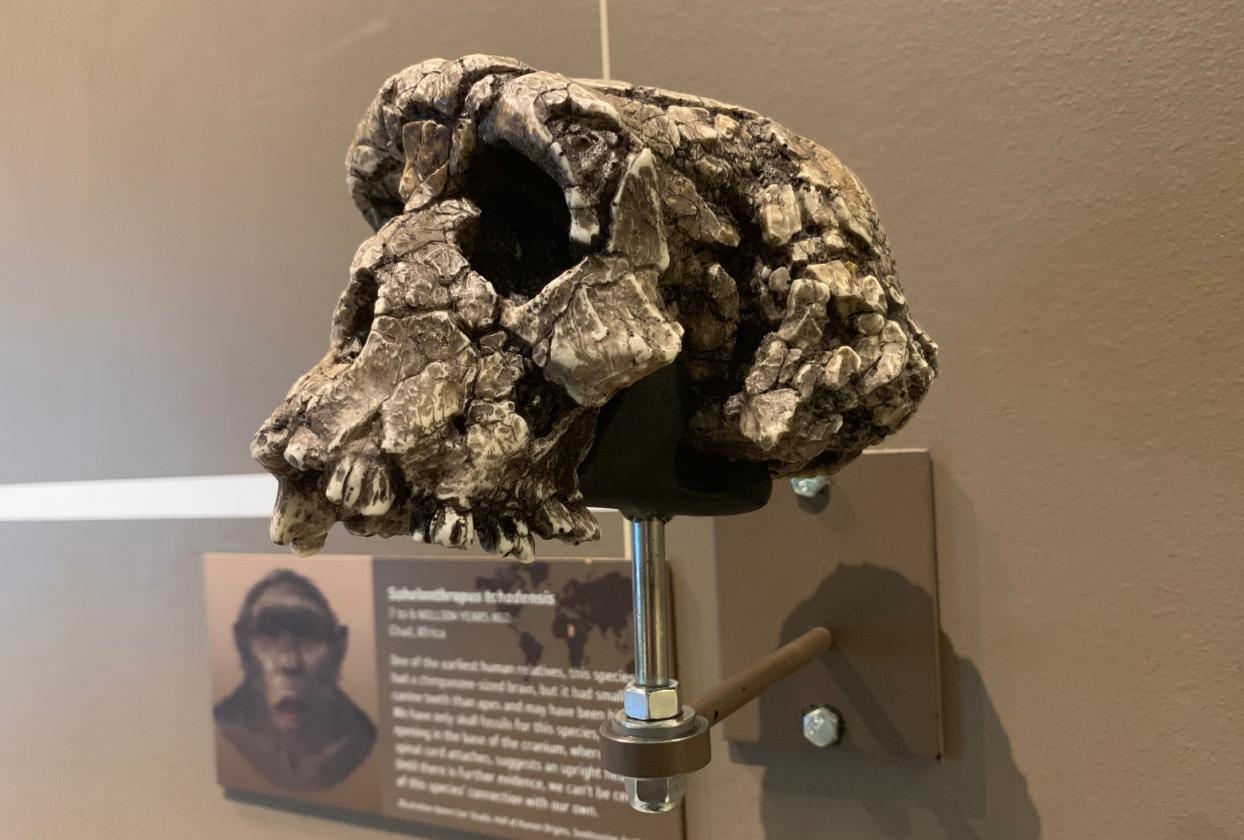 A cast of Sahelanthropus, an ancient relative of ours. Photo ©NHMU

Homo sapiens can seem like a lonely species. Despite the fact that we’re surrounded by other organisms – from giants like the blue whale to the bacteria inside your gut – there’s no one else quite like us. We seem to stand out as unique. But that’s only looking at the world as it is now. When we start to look to the past, it’s immediately apparent that our species is just one expression of a much broader human family that’s existed for over four million years.

You can get a better look at some of our relatives on the fourth floor of the Museum. There, arrayed on a wall according to when they lived, are intricate casts of real fossil human skulls. Some of them look quite a bit like us. Look at the skull of a Neanderthal and you’ll immediately recognize the family resemblance. In fact, anthropologists have recently discovered that this ancient culture is not entirely extinct. Thousands of years ago, what we think of as modern humans interbred with Neanderthals. We carry around pieces of Neanderthal DNA even though their distinctive culture has disappeared.

But there’s far more to the story than our ancient Neanderthal neighbors. In the past thirty years, especially, anthropologists working in Africa and Asia have uncovered a wealth of previously-unknown human species from various times in the past. Where the story of human evolution once seemed to be a straight line of ancestral apes becoming more and more like us, there is now an evolutionary bush of different humans. Many of them lived at the same time, meaning that the present state of just a single human species is actually very unusual.

Some of our cousins are so ancient that anthropologists still debate whether they should be considered as more closely related to other apes or to us. Sahelanthropus, found in Chad, is a controversial fossil in that it shows some features in common with early human but others that more closely resemble apes like chimpanzees. Other prehistoric personalities on the wall are relatives of ours, but are unlikely to be ancestors. Australopithecus sediba, who lived about 2 million years ago and was described in 2010, represents a unique branch of humanity who was similar to our direct ancestors but on a different branch of the family tree. The same goes for the several species of Paranthropus. These humans had wide cheeks, deep jaws, and massive teeth related to a tough or abrasive diet. They weren’t ancestral to us, but they lived in East Africa alongside our ancestors, making tools and foraging after their own fashion.

You can get better acquainted with all of them, and more, but rotating the life-size casts around on their pedestals. These humans tell a very different story from what our species has expected about the past. There was no sense of destiny about Homo sapiens, or any inevitability about the origin of our species 300,000 years ago. We’re part of a grander family, which itself connects us back to the rest of nature. We are not something cut off from the natural world. The fossil trail leads us back to the deep roots we share with all life.