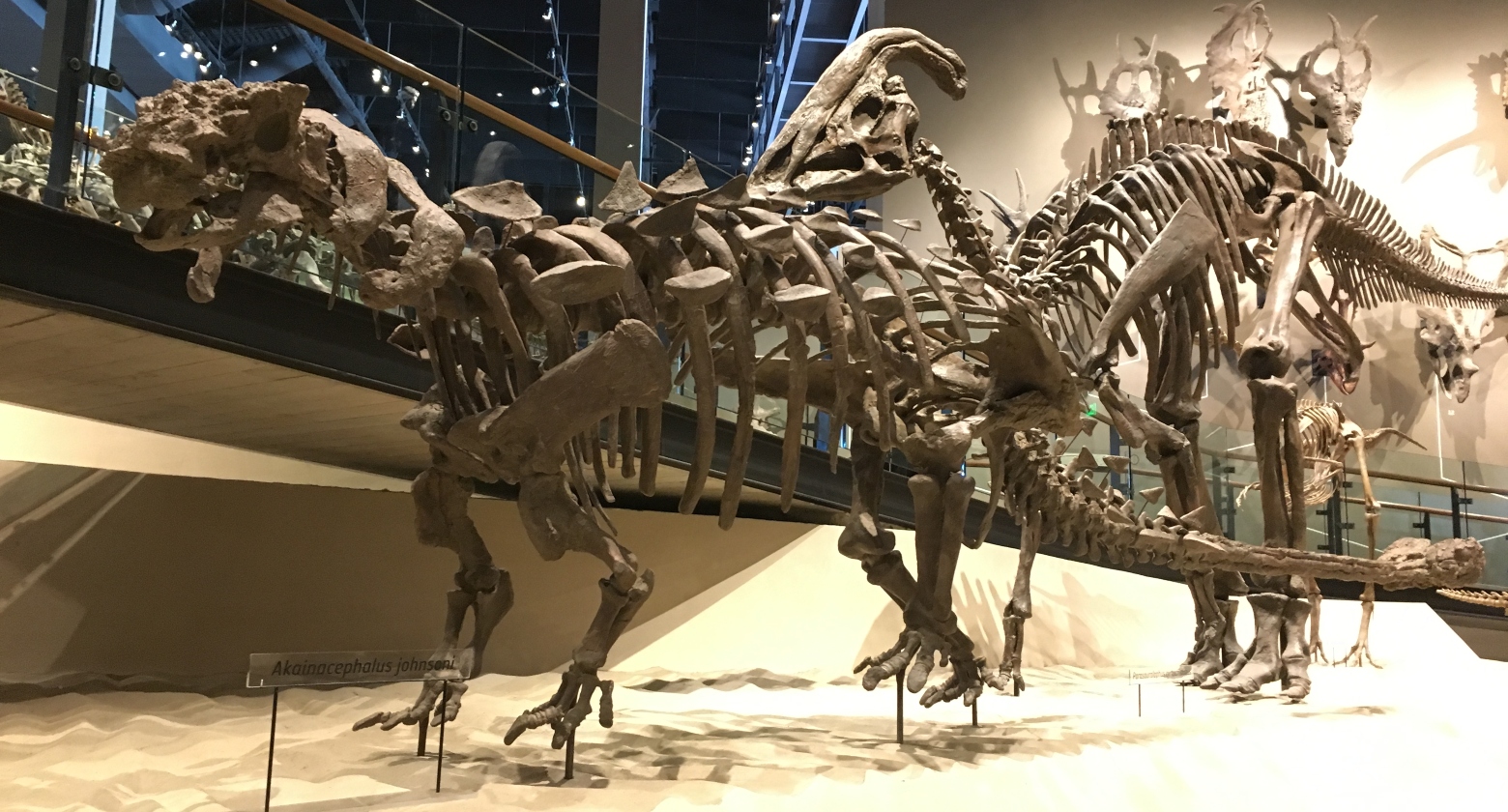 A reconstruction of the newly-named armored dinosaur Akainacephalus in the Past Worlds gallery. Photo by Riley Black

Utah is right in the heart of dinosaur country. The eastern and southern deserts of the Beehive State are stacked high with rock layers that document vast swaths of the Triassic, Jurassic, and Cretaceous periods when the “terrible lizards” ruled. Even better, many of the dinosaurs found in these rocks are unlike species found anywhere else.

Some Utah dinosaurs are already celebrities. The famous Tyrannosaurus rex, for example, has been found in the 68 million-year-old rock of our state’s North Horn formation. But other local dinosaurs are extremely rare, or completely new to science. The record is so rich that new species are named every year. Here’s a sampling of some of our local dinos that you may not have heard of before.

Named by Museum researchers in 2018, Akainacephalus is certainly a striking dinosaur. This heavily-armored herbivore has only been found in Utah so far, and it is the first ankylosaurid – that is, an armored dinosaur with a tail club – discovered in the state. You can see a cast of the super-spiky dinosaur in the Past Worlds gallery.

Even though new dinosaurs are coming fast and furious, Utah’s first unique dinosaur was named all the way back in 1877. Named Dystrophaeus, this long-necked plant eater lived about 154 million years ago and is the oldest known member of a group of dinosaurs called sauropods (think Apatosaurus and family). Recent expeditions by the Museum’s Paleontology crew have uncovered more bones that will help us better understand this Mesozoic herbivore.

Everyone knows T. rex, but did you know that ancient Utah was home to one of the earliest tyrannosaurs? In 1974 James Madsen, Jr. described a hip bone from eastern Utah’s Cleveland-Lloyd Dinosaur Quarry as a new species of carnivorous dinosaur he called Stokesosaurus in honor or colleague William Stokes. We now know that Stokesosaurus was an early tyrannosaur, about the size of a Labrador Retriever and with a svelte build very different from that of its later cousin.

Moab, Utah is famous as a “gateway to adventure,” and it also happens to have a dinosaur named after it. In 2017 Brigham Young University’s Brooks Britt and colleagues named this long-necked dinosaur from a collection of over 5,000 bones recovered from the Dalton Wells Quarry outside the town. Some of the bones show insect damage that was made back in the Cretaceous, indicating that the Moabosaurus bones had a rough afterlife.

With their huge claws, heavy builds, and breaks, therizinosaurs were some of the strangest of all dinosaurs. Utah has some, too. The latest to be uncovered is Martharaptor, known from a partial skeleton found in the Cretaceous rocks outside Moab and named by State Paleontologist Jim Kirkland and colleagues in 2012 after Utah's own Martha Hayden. If this dinosaur was anything like its close relatives, Martharaptor would have looked something like a dinosaur doing an impression of a giant sloth.

Birds are just another form of dinosaur, which means an ancient bird named by Jessie Atterholt and colleagues in 2018 also belongs on this list. To date, the 75 million-year-old bird is represented by a partial skeleton that is the most complete of its kind in North America. The anatomical details indicate that Mirarce was a kind of bird called an enantiornithine, or a group that thrived during the reign of the dinosaurs but went extinct by 66 million years ago.

Not all Utah’s dinosaurs were imposing giants. Some were quite small. One of those is Talos, a raptor-like dinosaur named by Lindsay Zanno and colleagues in 2011. This dinosaur belonged to a group of sender hunters called troodontids, and probably used its very flexible sickle claws on its fit to pin down small prey.

Cretaceous Utah was home to a wealth of unusual horned dinosaurs. One of the latest to come to paleontologist’s attention is Machairoceratops. A close relative of Diabloceratops, this 80 million-year-old dinosaur had long, sword-like horned overhanging the shelf of bone at the back of its skull. Rather than acting as defense, though, the horns were probably visual signals that helped Machairoceratops communicate with one another.

Named in honor of paleontologist Ned Colbert, this dinosaur was discovered in 1993 and was thought to be a small, carnivorous species that lived about 125 million years ago. A more recent analysis hints that Nedcolbertia was an “ostrich mimic” dinosaur related to the later, larger Ornithomimus.

Most every dinosaur fan knows of Iguanodon, one of the first dinosaurs to be named by science. Utah had its own Iguanodon relative. Named Iguanacolossus by Andrew McDonald and colleagues in 2010, this spike-thumbed herbivore could grow to be about 30 feet long.

When Mummification Was For the Birds