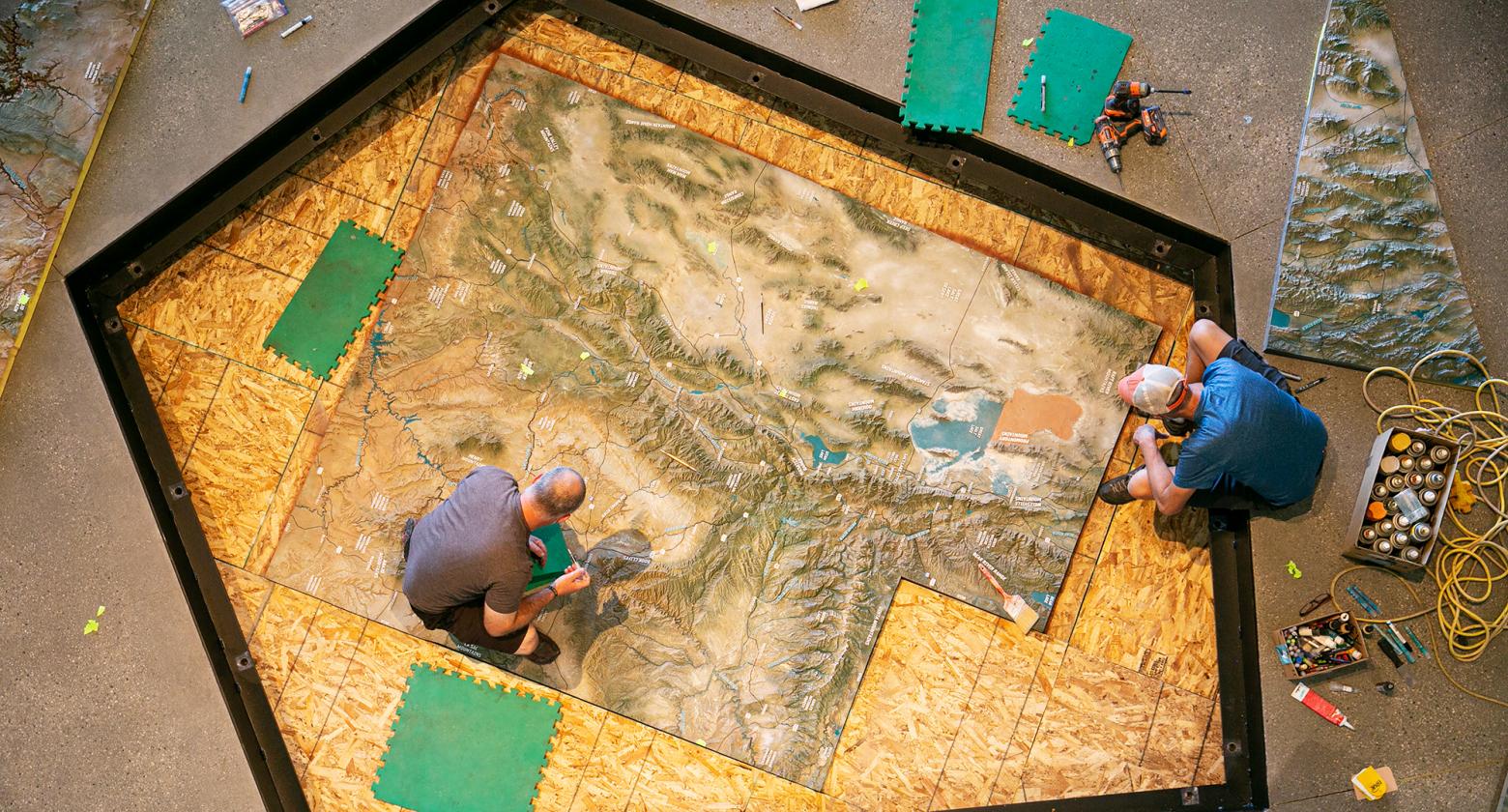 A team from Creotrē installs the new 3D map of Utah in the Canyon at the Natural History Museum of Utah. Image ©NHMU/Mark Johnston

When guests first arrive at the Natural History Museum of Utah and climb the stairs into the Canyon lobby, they are greeted by three impressive sights that introduce them to the Museum experience. First is the awe-inspiring architecture of the Canyon itself, with towering walls and bridges resemblant of Utah’s canyon country. Second is the glittering Collections Wall, giving guests a small taste of the 1.6 million collections objects that are the foundation of the Museum. Finally, there’s the oversized map of the state of Utah placed centrally in the Canyon lobby.

“That map brings it home,” said Tim Lee, NHMU’s senior exhibit designer, “It tells guests, ‘You’re about to experience this amazing journey through time that celebrates Utah’s natural history and culture, and your journey begins here.’”

The original was first installed in 2011 at the opening of the Museum’s new home in the Rio Tinto Center. It was made of cut foam layered with fiberglass and putty, which was then hand painted. While visually impressive, the process used could not replicate the drama of Utah’s towering mountain ranges and deep-cut canyons.

Then, in 2016, a Logan-based company named Creotrē produced a 14 by 14-inch map of the Red Butte Watershed for an update to the Museum’s Great Salt Lake exhibition. The map provided impressive detail in a small scale, produced using a new 3D printing technique formulated by Creotrē’s founders, Bradley Janssen and Eric Eliason of Utah State University.

While producers of 3D maps often use a reductive process to cut away the relief of the landscape, a process limited by the size of a router bit, the 3D printing technique first applied by Janssen uses a 0.4 millimeter nozzle that allows for incredible horizontal resolution. This allows Creotrē to produce a level of detail previously unobtainable, even giving vertical dimension to shallow lakes and rivers. A team member from Creotrē uses a syringe to paint a road on the new 3D map of Utah featured at NHMU. ©NHMU/Mark Johnston

Following the production of the Red Butte Watershed 3D map for the Museum, Lee and exhibits staff at NHMU quickly realized what the new technology could do for the iconic Utah map in the Canyon.

“Because the Canyon is the gateway to our guest’s visit to the Museum and even the rest of Utah, the topographic map really is a trailhead,” said Lee. “We wanted it to be exceptional and Creotrē had a way to get it there.”

Filling a frame of 130 square feet with a 3D landscape at a scale of 1 inch to every three miles would be a challenge Creotrē had yet to explore, but in February 2020 the project was officially launched and the challenge accepted.

Starting with USGS digital elevation models that were passed through Creotrē’s proprietary algorithm (which applies a four-times exaggeration to some features while smoothing others to maintain a realistic but readable 3D map), the printing then began of individual 1-foot square tiles which would total 259 by the time they were done.

Each tile was then closely inspected and hand painted before being linked together and mounted to a base for transport to NHMU. In all, the printing portion of the work took three months. Then on August 6, just prior to NHMU’s reopening to the public, the new map arrived for installation in the Canyon. Carefully wheeled from a delivery truck into the Museum, the massive map was then lowered by hand and secured into its new home at the “trailhead to Utah.”

The upgrade was immediately clear as the vastness and diversity of Utah’s colorful landscapes were now on display in amazing three-dimensional texture. “You can really feel the map,” said Lee, upon viewing the new installation. “Even though you can’t touch it, the texture is so rich that it becomes this tactile experience that’s sometimes hard to gain from two dimensional exhibits.”

Every square inch of the map is unique, from familiar Utah features like the east-to-west Uinta Mountains to the confluence of the winding Green and Colorado rivers, to the more rarely explored regions of the Book Cliffs and Great Basin Desert. Guests can even see the immensity of the Grand Canyon and other geological features of Utah’s six neighboring states. Every examination of the detailed map reveals something new.

The incredible detail Creotrē's 3D printing process created provides the intimate look at Utah’s amazing landscapes that the Museum’s guests deserve. Lee hopes that visitors will gather around the new installation and now more than ever be able to pick out points that are recognizable to them.

“It will connect our visitors to Utah and potentially to their own experiences enjoying our state’s amazing landscapes and natural history,” Lee said. “That speaks to our broader mission of illuminating the natural world and the place of humans within it.”