How a Museum Volunteer Became a TikTok Star 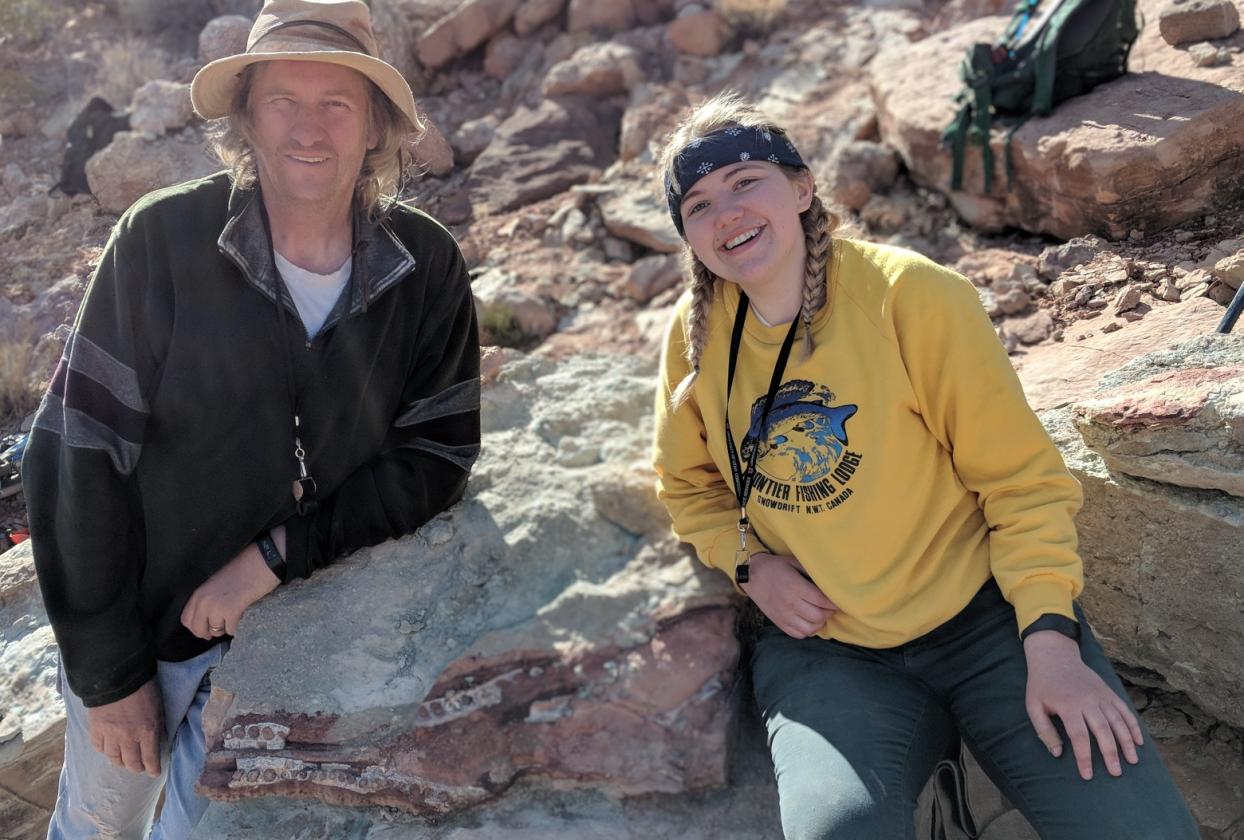 Eliza Petersen (right) and Andrew Milner (left) with the skull of a phytosaur they discovered on an NHMU expedition in 2017. Credit: Eliza Petersen

There’s a world of difference between the words “meatier” and “meteor.” The difference doesn't only concern dinosaurs. The wordplay has catapulted NHMU paleontology volunteer Eliza Peterson into the spotlight.

In case you’re one of the ten people who hasn’t seen the video, Petersen went viral on the social media app TikTok this month for a short skit about the fate of the dinosaurs.

“I heard that joke when I was younger and just loved it,” Petersen says, so when she saw a friend share a line-by-line breakdown of the pun on social media she took it as a script. With a paper beard and a perfectly-timed tear, the video was soon done. “I wanted to put my own spin on it and I posted it to TikTok thinking maybe 100 people would see it,” Petersen says.

A hundred people did see it. Then hundreds and thousands more. The video went viral, racking up more than three million views so far. And while it might not be immediately obvious from the clip, NHMU played an important role in the video’s genesis. More than five years ago Petersen worked as a high school intern in the Museum’s anthropology labs. “I was devastated when summer came and my internship was over,” Petersen says. Then she noticed a call for field volunteers in the paleontology department. Petersen jumped at the chance. “The passion I had for dinosaurs when I was a little kid just skyrocketed,” she says.

That passion led to discovery. In March of 2017, the Museum paleontology field crew ventured to southeastern Utah to look for Triassic fossils. Along with Petersen, St. George Dinosaur Discovery Site paleontologist Andrew Milner was among the crew. The trouble was that Milner's car broke down on the way to camp. Petersen was able to get him a free tow back to town, and the two spent the day talking dinosaurs in Moab as Milner’s car was fixed.

The next day, when the full crew got out to the Triassic outcrop, Petersen jokingly said to Milner “Hey, you owe me now, you have to help me find anything,” she recalls, hoping to break a streak of not finding fossils during the previous two seasons. “We ended up finding a phytosaur skull on the same day,” Petersen recalls, the bones belonging to a creature that looked and lived like a crocodile but actually belonged to a different, extinct lineage of reptiles. “It was awesome.”

Before the COVID-19 pandemic closed the museum, Petersen had started to prepare the skull in the Museum lab and puzzle the fossil back together. In the meantime, there are still plenty of dinosaur facts and jokes to share on social media, and the Museum will certainly inspire what’s to come. “I’ve loved my time here and everybody that I work with," Petersen says. “I definitely wouldn’t have been able to do any of this without the opportunities the Museum’s given me.”

Riley Black is the author of Did You See That Dinosaur?, Skeleton Keys, My Beloved Brontosaurus, and a science writer for the Natural History Museum of Utah, a part of the University of Utah in Salt Lake City. Our mission is to illuminate the natural world and the place of humans within it. In addition to housing outstanding exhibits for the public, NHMU is a research museum. Learn more.