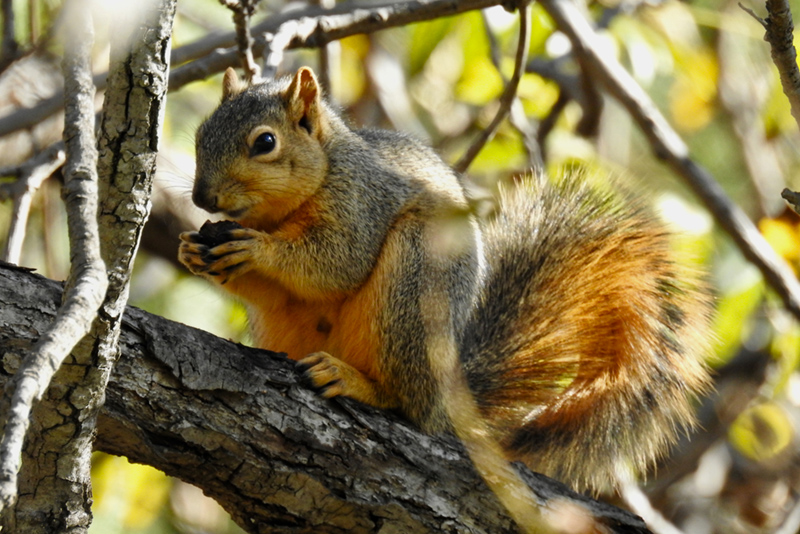 Fox squirrels are easily recognizable by their bright-colored bellies. ©NHMU

You've probably seen them scampering through the trees of your yard or scrambling up telephone poles along Salt Lake City streets, fluffy little mammals clothed in gray and orange fur - fox squirrels. Despite how comfy the rodents might seem along the Wasatch Front, though, they're new arrivals. Fox squirrels, known to zoologists as Sciurus niger, arrived in Utah by 2011 and have become quite a common sight. But what does their proliferation mean for Utah's native species, and the squirrels themselves? That's the focus of the NHMU Fox Squirrel Project, an initiative that relies on citizen scientists as much as experts.

"We need your help to collect data with us," says NHMU citizen science coordinator Ellen Eriksson. Trying to track fox squirrels through parks, backyards, and forests would be a huge task for a small number of zoologists, but by reporting fox squirrel observations researchers like NHMU Curator of Vertebrate Zoology Eric Rickart gather the critical data to understand where these squirrels live and how they've adapted to Utah's landscapes.

Naturally, following the habits of fox squirrels requires knowing what a fox squirrel looks like. "Fox squirrels are tree squirrels, that is they do a lot of climbing in trees and elsewhere, and live in areas with a lot of trees," Rickart says. You can tell fox squirrels apart from other Utah squirrel species by a few telltale signs. Adult fox squirrels are usually larger than native Utah squirrels, about 18 to 26 inches long, and have gray backs with bellies ranging from yellow to orange. Not to mention that their tails are big and bushy - quite a bit like a fox's!

Even though NHMU researchers are always keeping an eye out for fox squirrels, events like this December's Squirrel Fest greatly boost the amount of information naturalists have to work with. "Having more eyes in the community is really helpful," Eriksson says, allowing naturalists to see where fox squirrels are settling and spreading out from Salt Lake City. That matters because fox squirrels are now part of Utah's nature, and zoologists want to know how the squirrels are affecting other species - from other squirrels to the plants fox squirrels eat. Given that fox squirrels have only been in Utah for about ten years, there is still a great deal to learn.

As playful and charming as they can be, though, fox squirrels are viewed as pests by some. The rodents dig up gardens, get into attics, and chew through walls, which sometimes leads people to trap them and take them elsewhere - something that doesn't help, but actually lets the squirrels spread further. That's all the more reason to study them. "No matter what, we're going to have to learn to live with them," Rickart says, and doing that will rely on everyone's help gathering observations. The better we know our fluffy-tailed neighbors, the better we can learn to share our city - and the occassional vegetable garden - with them.

Learn more about Fox Squirrels including

Riley Black is the author of Skeleton Keys, My Beloved Brontosaurus, Prehistoric Predators, and is a science writer for the Natural History Museum of Utah, a part of the University of Utah in Salt Lake City. Our mission is to illuminate the natural world and the place of humans within it. In addition to housing outstanding exhibits for the public, NHMU is a research museum. Learn more.