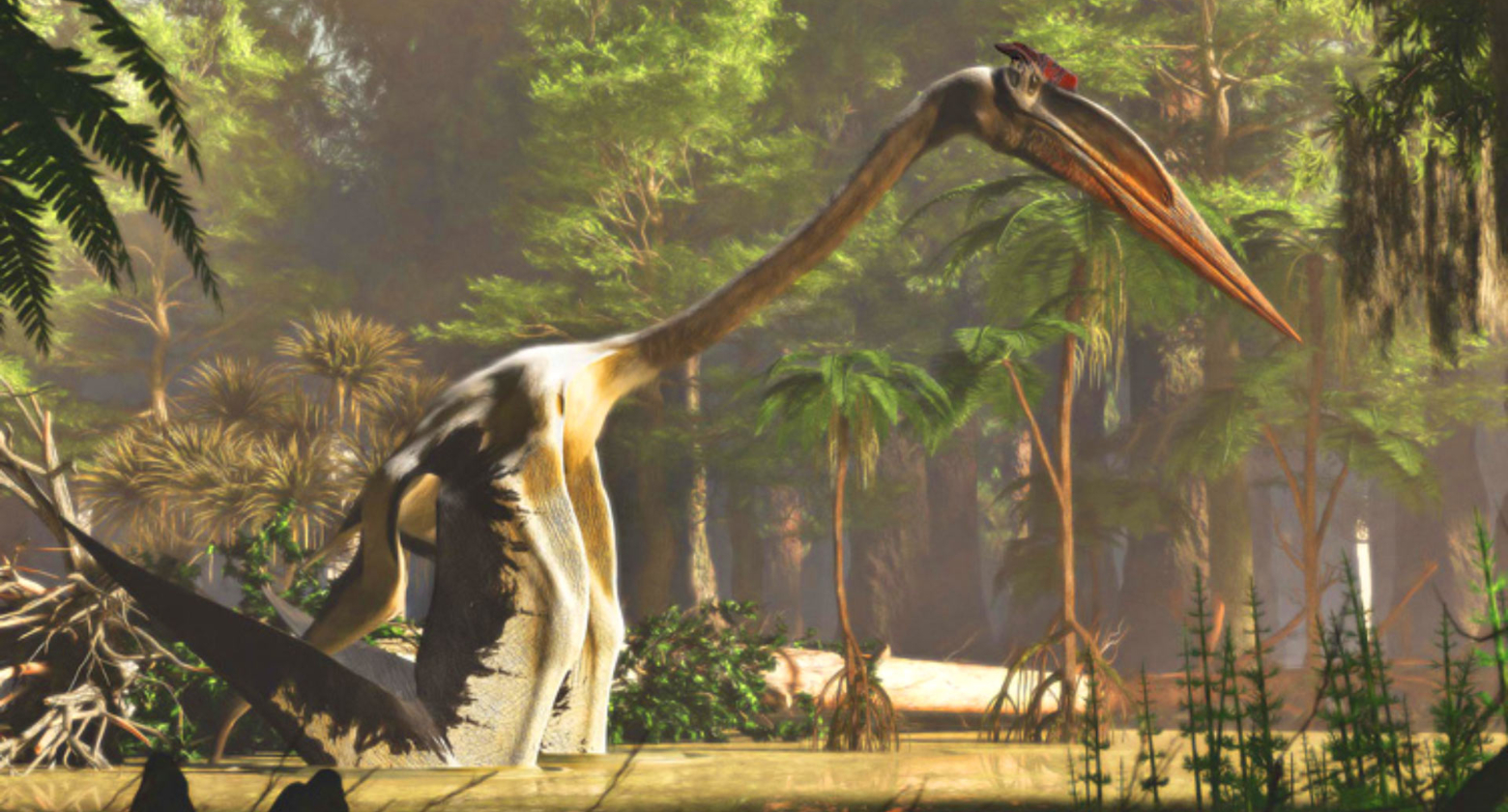 A full description of the giant pterosaur Quetzalcoatlus is just one of the year's biggest paleontology stories. Credit: James Kuether

You may have heard about ancient human footprints and armored dinosaurs with distinctive tails, but 2021 has been so full of fossil discoveries that we just have to highlight a few more. These are some of the most awe-inspiring and puzzling paleo stories from this year.

Through bones, ancient DNA, and high-tech analyses, paleoanthropologists are continuing to discover more species of ancient humans. The latest to step onto the scene is Homo bodoensis, humans who lived in what is now Ethiopia over 600,000 years ago. These humans were very much like us, and, some anthropologists have proposed, may have even been ancestors of our own species Homo sapiens. Other experts disagree, noting that there are other potential ancestors to our lineage to be considered, but either way Homo bodoensis indicates that there is a great deal more to discover about humanity's ancient past.

Fossil dinosaur eggs are very rare finds, and dinosaur embryos are even rarer. That's why paleontologists were stunned to find a complete embryo of a beaked dinosaur called an oviraptorosaur that was uncovered in China. This fossil, more than 66 million years old, is the best look yet at how some dinosaurs grew inside their eggs. More than that, the position of the embryo is very similar to that of modern birds like chickens and indicates that the little oviraptorosaur was probably just days from hatching.

Paleontologists have long known that marine reptiles called ichthyosaurs could get very big, some of them getting to be comparable to humpback whales in size. But a new find from Nevada indicates that these seagoing saurians evolved to be giants much faster than whales. A new, giant species of ichthyosaur indicates that these reptiles grew to whale-like sizes in less than three million years whereas whales took tens of millions of years to do the same. That's far faster than paleontologists expected and may tell researchers something important in how rich with life Triassic oceans were.

Who do fossils belong to, and what happens when fossils are stolen or smuggled? These issues aren't new to paleontology, but they gained increased prominence in 2021. This year, for example, experts started the #UbirajaraBelongstoBR social media campaign to call for the return of a newly-named dinosaur that was allegedlly smuggled from Brazil and is currently in a German museum. Controversy around "blood amber" from Myanmar, too, came to broader attention, with experts calling for a ban on the acquisition, research, and publication on amber sold on the black market to fuel genocide in the country. These discussions and debate will surely continue into 2022 and beyond.

The Dawn of Lizards

How did lizards and lizard-like reptiles get their start? Paleontologists have puzzled over this question for a long time, but 2021 saw the announcement of a critical fossil. Discovered in the Late Triassic rock of Argentina, Taytalura is one of the earliest-known members of the group that includes lizards, snakes, and the lizard-like tuatara. In fact, the new fossil indicates that the earliest members of this group - called lepidosaurs - looked more like the tuatara than lizards, helping paleontologists understand how these different lineages evolved and diversified through time.

Figuring who ate whom in the ancient past is a difficult task. Direct evidence for feeding is rare compared to tracks and body fossils. But this year paleontologists announced an amazing triple find - a prehistoric squid relative called a belemnite that was feeding on a crustacean while the squid itself was munched on by a shark. The fossil represents a rare moment in time that allows us to get an idea of what life was like back in the Jurassic seas.

A central nervous system doesn't seem like the sort of thing that would make it into the fossil record. Soft parts of organisms, more often than not, decay away before they can become fossils. But sometimes cases of exceptional preservation give us an unprecedented look at ancient anatomy. One such case is in a 310 million-year-old fossil of a horseshoe crab, a cousin of scorpions and spiders, found in Illinois. The details of the preserved nervous system indicate that even as horseshoe crab body shapes changed, their brains stayed pretty similar.

Sometimes tiny fossils have big implications. A small crab found in 99 million-year-old amber - ethically sourced by the paleontologists who described it - is now the oldest known example of a freshwater crab. The tiny crustacean helps paleontologists put a timer on when crabs started to explore freshwater habitats, not to mention better understand how some crabs made the switch from salt to fresh water multiple times.

Some fossils are major head-scratchers. A fossil shark named Aquilolamna is one of them. This fossil shark, found in Mexico, has broad pectoral fins that look more like a manta ray's than a shark's. Exactly why this shark evolved such a familiar shape is unclear, but might have to do with a filter-feeding lifestyle. Like some other major finds this year, however, the find has also courted controversy regarding the ethics of how it was collected and where the fossil has been stored.

The Biggest Flier of All Time

Not all major paleontology stories center on new finds. Sometimes experts wait years, even decades, for the full details of fascinating fossils to be published. Even though the huge pterosaur Quetzalcoatlus was named in 1975, paleontologists only got a full description of the flying reptile this year. Among other things, the new research concluded that Quetzalcoatlus really could fly, despite its imposing stature, and that pterosaurs were still proliferating when the Cretaceous ended with a mass extinction 66 million years ago.

Riley Black is the author of The Last Days of the Dinosaurs, Skeleton Keys, My Beloved Brontosaurus, Prehistoric Predators, and is a science writer for the Natural History Museum of Utah, a part of the University of Utah in Salt Lake City. Our mission is to illuminate the natural world and the place of humans within it. In addition to housing outstanding exhibits for the public, NHMU is a research museum. Learn more.