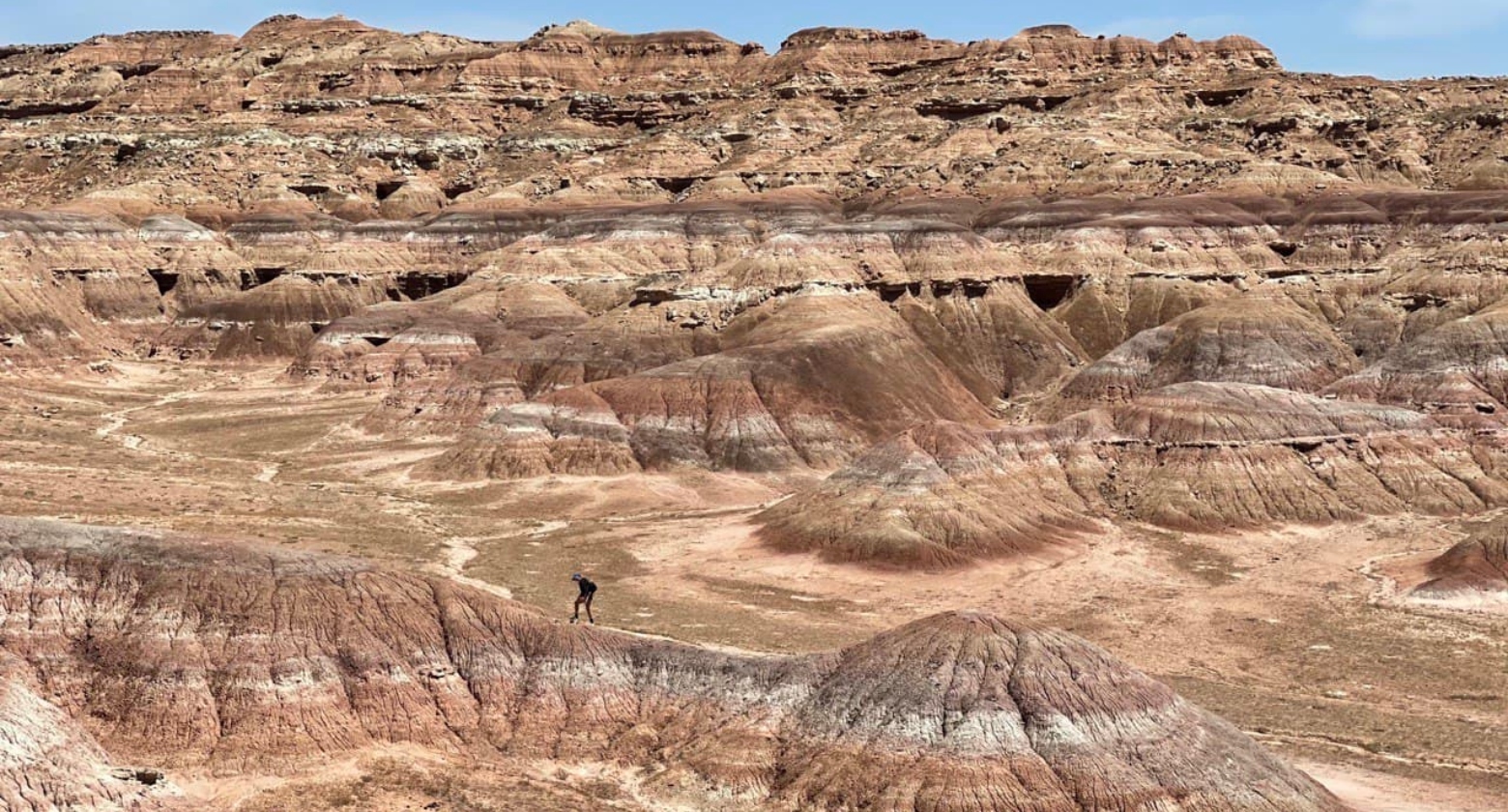 The Eocene rocks of the Uinta Basin are a fossil wonderland. Credit: Riley Black

Field days in the Uinta Basin start early. Every morning, around 5:30 a.m., you can hear sleeping bags start to rustle and tents being unzipped all around camp. The crew of intrepid paleontologists are going to need breakfast - and likely coffee - before setting out for another day of fossil hunting, an activity best done before the mid-summer sun gets too hot.

For a month, Midwestern University paleontologist Beth Townsend and her crew of colleagues, students, and volunteers have followed the same schedule. It's a smart strategy, setting a daily timeline more like the lizards and other creatures of the Uinta Basin than a regular 9-5. When temperatures can reach over 90 each day, and afternoon thunderstorms always threaten to make roads impassible, it's best to get out to the colorful, banded outcrops of the Uinta Basin early.

The fossils that Townsend's crew have been searching for are over 30 million years old, laid down during a time called the Eocene. This was still relatively early in what paleontologists sometimes call the "Age of Mammals," when beasts proliferated through a terrestrial world left vacant by the extinction of the non-avian dinosaurs. Some of them were incredibly strange - such as the six-horned, sabertoothed herbivore Eobasileus - while others were the early relatives and predecessors of camels, rabbits, cats, and dogs we see around us today.

Once you follow the oil and gas roads through the desert and have your boots on the popcorn-textured sediments of the outcrop, though, the most common fossil animals you're likely to spot are turtles. Busted pieces of turtle shell are seemingly everywhere, remnants of Eocene tortoises, soft-shelled turtles, pond turtles, and more. It's almost possible to become sick of turtles while searching the Eocene. After finding a dozen shells that have been fragmented into pieces by time and erosion, you start to yearn for a sign of crocodile, mammal, or some other creature. And, most assuredly, such creatures do show up, but never in such abundance as the shell-backed reptiles.

But there's more to the story than simply the search for more fossils. The different species of Eocene turtles in the Uinta Basin, for example, are associated with different types of habitats. The turtles are indicators of what the local environment was like at a given point in time, meaning that they can help researchers track ecological change over time and space. Fossils of other creatures help fill out this picture, as well. Knowing who was around in what habitats and what times allow researchers like those in Townsend's crew to stitch together a vision of the Eocene world, and how that world was affected by climate change.

Around the time that the Eocene rocks of the Uinta Basin were being laid down, the world was going through a climate shift similar to the one we've triggered today. Global temperatures rapidly increased because of greenhouse gases released into the atmosphere, and these quick changes can have dramatic consequences for life on Earth. In warming climates, for example, large mammal species often become smaller. Insects tend to proliferate and cause more plant damage. The distribution of species also changes, allowing cold-blooded creatures like crocodiles and turtles to live in places that were previously inaccessible. Each tagged fossil and documented fossil site is part of this picture, not just a collection of old bones but dots that connect entire ecosystems through time.

Still, the thrill of discovery is hard to escape while searching for these ancient clues. Sometimes they are obvious, such as large chunks of mammal bone scattered across a steep slope of ancient sediment. Other times you need to almost put your nose to the ground to see them, like tiny teeth from rodent-sized beasts that lived in these habitats. All of them have stories to tell and raise a litany of questions about how these organisms lived and related to each other. Just this year alone, Townsend's team documented over 600 new fossil finds - a record in the multi-decade Uinta Basin Project. Perhaps next year they'll uncover even more.

Riley Black is the author of The Last Days of the Dinosaurs, Skeleton Keys, My Beloved Brontosaurus, Prehistoric Predators, and a science writer for the Natural History Museum of Utah, a part of the University of Utah in Salt Lake City. Our mission is to illuminate the natural world and the place of humans within it. In addition to housing outstanding exhibits for the public, NHMU is a research museum. Learn more.