How Do Animals Make All Their Beautiful Colors? 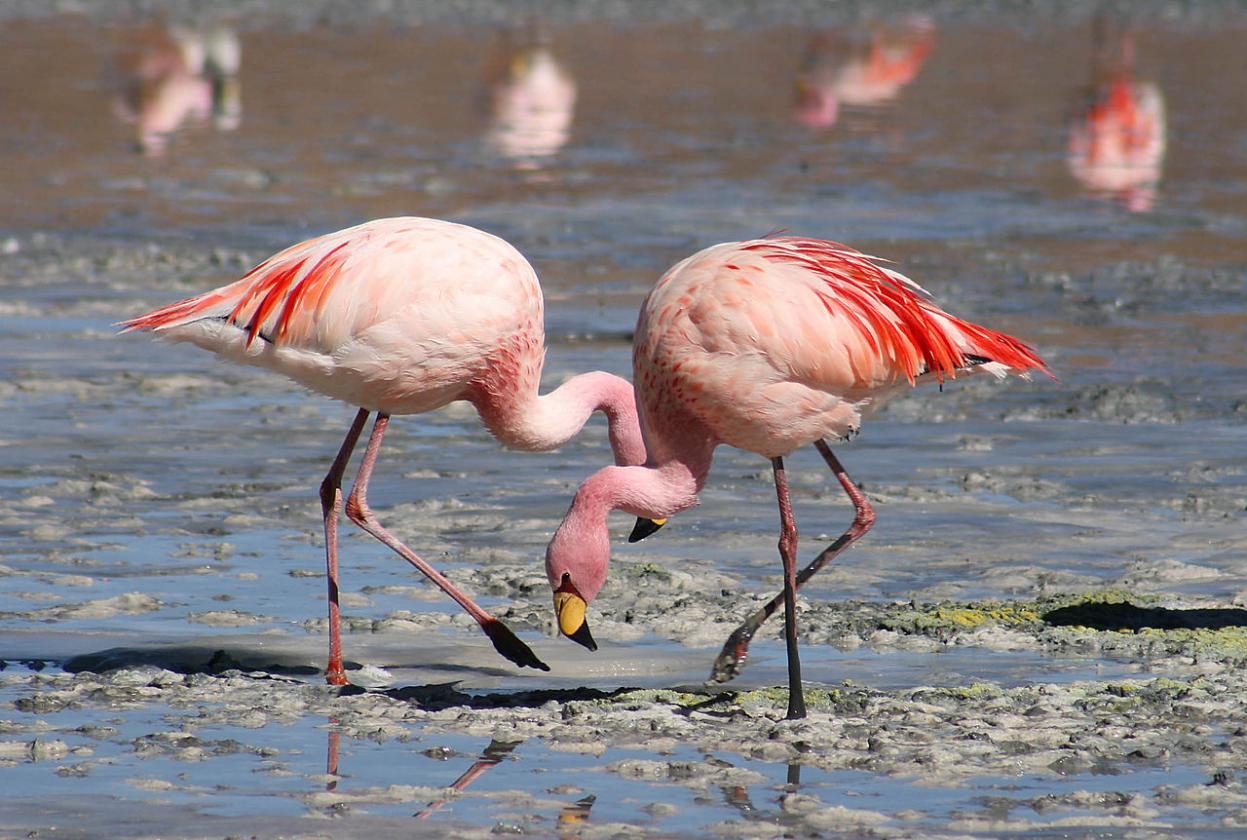 Flamingos are among the many animals that get their colors from what they eat. Credit: Valdiney Pimenta CC BY 2.0

We live in an incredibly colorful world. Even in cities dominanted by asphalt and concrete, it's not hard to find colorful little crocuses pushing up next to the sidewalk, magpies clad in black and white, and bees that are so iridescent that they almost look metallic, just to name a few. But how does nature make so many stunning hues? Just as life itself is diverse, so are the many ways organisms make color.

One of the ways many animals get their shades - particularly birds and butterflies - is through what experts call structural color. The phenomenon is pretty much what it sounds like - the microscopic structure of an organism's feathers, scales, shell, or other extenal covering interacts with light such that a different shade is refracted back. The feathers of many birds, for example, are filled with tiny, blob-like organelles that carry pigment. These are called melanosomes. The distribution and density of the melanosomes interacts with light to create some avian shades, especially black, rust red, brown, and iridescent. The fact that these colors are made by structure means that researchers can effectively reverse-engineer what color a particular animal was even from an old or even fossilized specimen - much like the feathered dinosaurs that have been restored in full color.

But that's hardly all. There are some colors - particularly warm shades like yellows, oranges, reds, and purples - that are made by organic compounds called carotenoids. In organisms like many plants and fungi, carotenoids are produced internally by breaking down organic molecules like fats. But some organisms get their bright shades from eating others. Flamingos regularly filter and eat brine shrimp from lakes. These brine shrimp contain carotenoids in their shells, so when flamingos metabolize the shrimp those carotenoids get taken up in their own bodies and redistributed into their feathers (as well as egg yolks and fat in their bodies). That's why baby flamingos are gray while most adults have more vibrant shades, and also why paleontologists think that some filter-feeding pterosaurs - like Pterodaustrofrom Argentina - might have been pink, too.

Naturally, it's not just the most brilliant or vivid shades that are important to life on Earth. Cholrophyll, a pigment found in plants and other forms of life, is what makes so much of the terrestrial realm green. The reason why has to do with the way light responds to pigment. When white light - like sunlight - interacts with chlorophyll, the outer parts of the visible spectrum get absorbed. The green and yellow parts of the spectrum, however, are instead reflected back and that's why a field full of plants has us seeing green. Some organisms have even adapted ways to use the way light behaves as a form of camoflage. The red part of light has a lower amount of energy than blues or violets, and so that's why red fades long before blue in increasingly deeper water. That means a red fish at the surface will look black at a lower depth, a natural form of concealment that depends on the way light behaves.

Speaking of hiding, some animals are able to alter their skin cells to make different colors and patterns. Cephalopods like cuttlefish are covered in special, pigment-carrying cells called chromatophores. Not only can these cells change size, but the pigment within them can be redistributed to help these invertebrates take on different shades and patterns to hide out or even convey their emotions. The cells are tied in to the nervous system of these cephalopods, allowing changes to transpire in the blink of an eye.

There are many more examples of the ways life on Earth makes and utilizes color, some of which we can't even see. Earth is actually much more colorful than we can perceive - that's because our own eyes can only pick out parts of the visible spectrum. Consider our friends the birds once more. Many birds are able to perceive uv wavelengths that we cannot without assistance, meaning that we are not seeing birds as they see each other. The world is even more colorful than we ever really knew, a tribute to nature's endless creativity.

Learn about our special exhibition

The Nature of Color