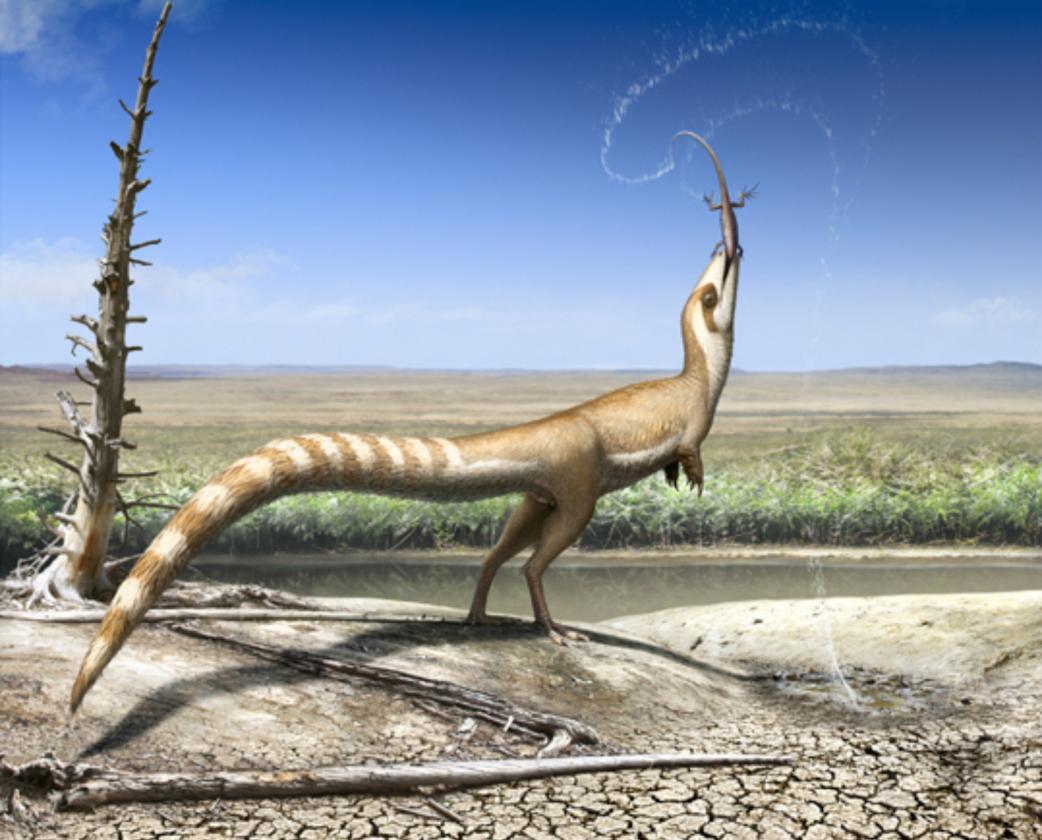 The dinosaur Sinosauropteryx was one of the first to have its colors studied. Credit: Bob Nicholls CC BY 4.0

What colors were dinosaurs? For decades spanning almost the entire history of paleontology, we didn't have an answer to that question. Dinosaur fossils came to us as tracks, bones, and the rare skin impression that revealed the texture of dinosaur scales but not their hues. But a little more than a decade ago, that picture began to change. The secrets to dinosaur color were there all along. Paleontologists just had to find them.

One of the critical clues came from understanding that dinosaurs are still with us. Birds are living dinosaurs, having first evolved in the Jurassic and standing as the only dinosaur lineage to survive the mass extinction at the end of the Cretaceous. By looking at living dinosaurs, then, paleontologists could gain new insights into the lives of extinct, non-avian dinosaurs. The fact that many extinct dinosaurs had feathers and feather-like body coverings fundamentally changed what we thought the "terrible lizards" looked like.

But the next critical clue came from an unexpected place. Paleontologists have known since the 19th century that fossilized cephalopod ink sometimes carries its original pigment. Then, in 2006, paleontologist Jakob Vinther was looking at such a fossil under a microscope when he noticed little blobs in the invertebrate's ink sac. These tiny orbs had previously been dismissed as fossilized bacteria, but, on further investigation, Vinther found that these were pigment-carrying organelles called melanosomes. And if melanosomes could be preserved in a prehistoric cephalopod, why not in other tissues like dinosaur feathers?

By 2010, full-color dinosaurs were starting to appear in the scientific literature. Fossilized melanosomes in prehistoric feathers were compared to those in living birds to reverse-engineer at least some of the colors dinosaurs wore. This technique didn't work for some colors, like yellows created by biochecmicals rather than melanosomes, but soon paleontologists were figuring out the shades of dinosaurs ranging from the magpie-like Anchiornis to enormous penguins. Some feathered dinosaurs wore dark, iridisecent sheens like ravens, others had red-and-white striped tails, and some wore rainbow shades, not all that different from some birds.

Experts have even been able to extend the same technique to some exceptional dinosaur skin. The horned dinosaur Psittacosaurus and the armored dinosaur Borealopelta, for example, were darker above and lighter below to create a kind of camoflage called countershading. This not only tells us something about the colors of these dinosaurs, but what their environments were like and how they lived. Both of these herbivorous dinosaurs would have had to look out for predators, so disruptive coloration would have helped them avoid detection by hungry predators.

Naturally, there are some limitations to the technique. Fossils that preserve melanosomes in skin or feathers are relatively rare and take a long time to study in detail. And while melanosomes can help us detect some colors - such as black, gray, reddish brown, and iridescent - there are some parts of the dinosaur color range we can't quite detect. But those caveats aside, we can now at least begin to answer that persistent question of what dinosaurs looked like in life. We can start to see the colors that kept them hidden, helped them show off, and brightened up the Mesozoic world. At long last, we can start to envision dinosaurs in living color.