The Jurassic Park film franchise contains a bewildering cornucopia of dinosaur species, both real and imagined. Its latest installment, Jurassic World Dominion, is no exception, with a host of new beasts to thrill and frighten us in equal measure. And, as it turns out, one dinosaur newcomer that plays a pivotal role (don’t worry, no spoilers here) has a special connection to the Natural History Museum of Utah!

One of the most striking dinosaurs to appear in Jurassic World Dominion is the horned dinosaur Nasutoceratops titusi. With its sweeping curved brow horns, this Triceratops cousin is reminiscent of Texas longhorn cattle. Brought to life in the movie by CGI magic, this animal was in fact a real species that lived some 76 million years ago, not in Texas, but right here in Utah.

Nasutoceratops is unique to our state, having only been found in rocks of the Kaiparowits Formation of Grand Staircase-Escalante National Monument. Moreover, the only original fossils of this species are here in the collections of NHMU. Only one definitive skull of Nasutoceratops has ever been discovered, along with two more fragmentary specimens that might belong to the same species. You can see the reconstructed skull on NHMU’s famed Ceratopsian Wall. 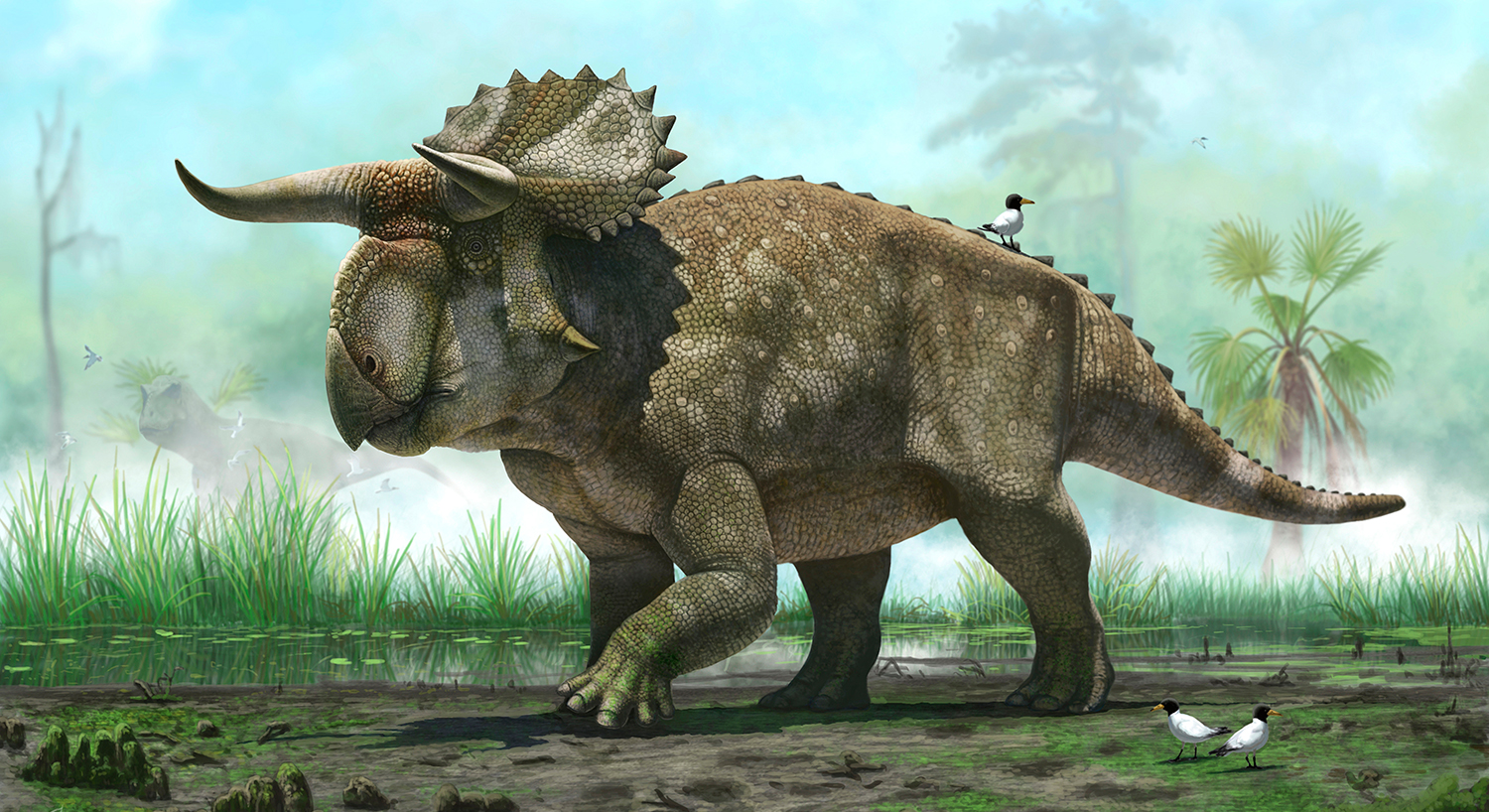 Illustration by Andrey Atuchin
Beyond its new-found fame on the silver screen and uniquely Utah provenance, what makes Nasutoceratops special? For one, it is part of an ancient ecosystem that was teaming with a remarkable diversity of horned dinosaurs; there are at least five different species of ceratopsids that co-occur in the Kaiparowits Formation, whereas most Late Cretaceous North American fossil deposits preserve only 2-3 species. The skull shape of Nasutoceratops is also remarkable compared to its closest relatives within the sub-group of horned dinosaurs called centrosaurines. Most of these species have short brow horns, larger nasal horns, and frills with large spikes and protuberances. In contrast, Nasutoceratops has long brow horns, barely a bump for a nasal horn, and only modest adornments on its frill. So Nasutoceratops would have definitely stood out at the family reunion!

You can discover more about Nasutoceratops titusi and its cousins with NHMU’s new ResearchQuest investigation, Triceratops Traits. And, we encourage you to come visit NHMU in person to see a whole herd of horned dinosaur fossils in our Past Worlds exhibit. Finally, stay tuned here on the NHMU blog to learn about other horned dinosaur discoveries from NHMU paleontologists!

Randall Irmis is the curator of paleontology and chief curator at the Natural History Museum of Utah, a part of the University of Utah in Salt Lake City. Our mission is to illuminate the natural world and the place of humans within it. In addition to housing outstanding exhibits for the public, NHMU is a research museum. Learn more.