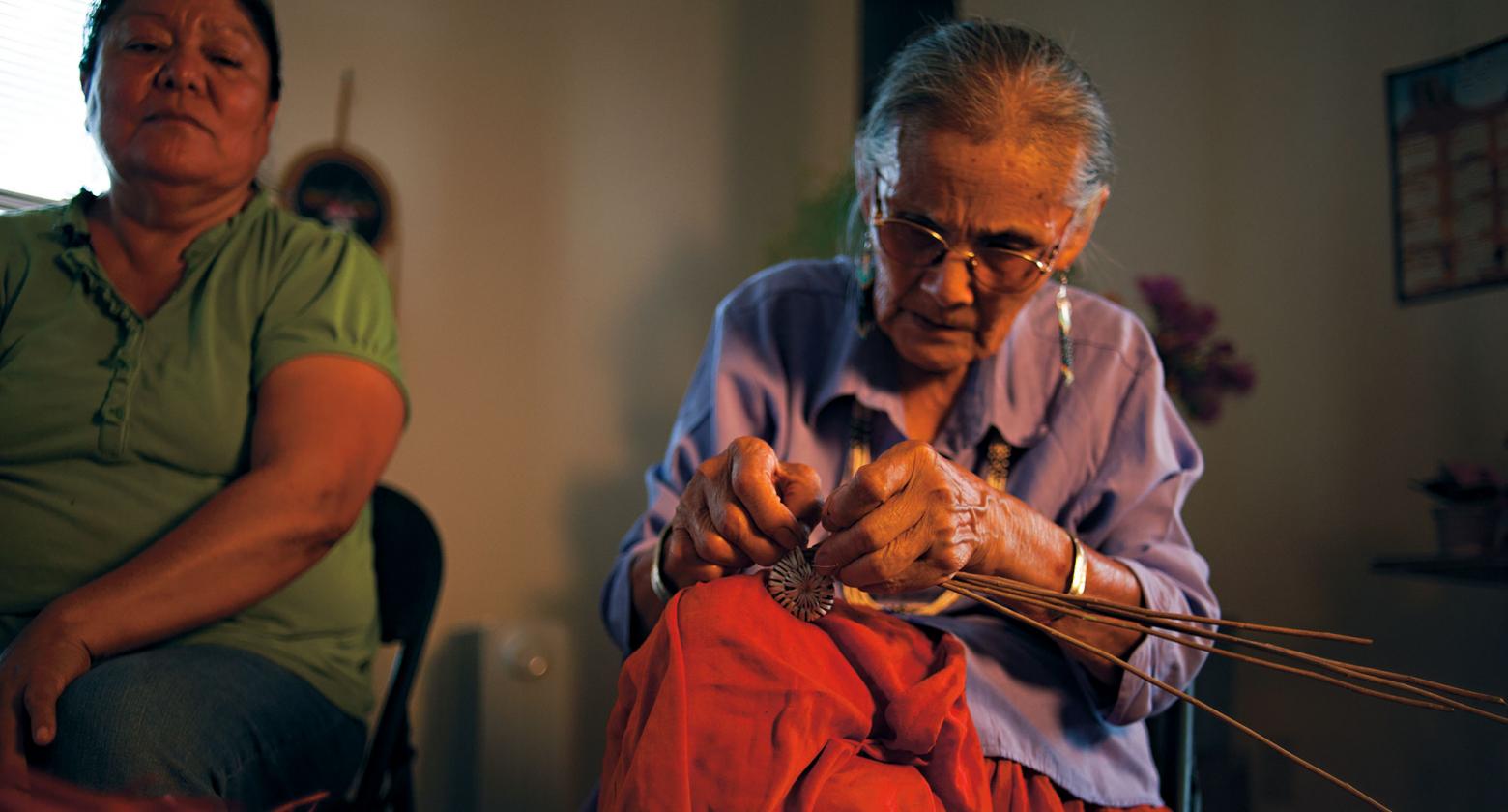 One day in 1990, Mary Holiday Black walked into the Twin Rocks Trading Post in Bluff, Utah, and quietly slipped the new basket she had woven on the counter—a basket that would launch an artistic revolution. The groundbreaking design featured the dancers, flames, and brush arbor of the Fire Dance, an all-night dance at the conclusion of a nine-day healing ceremony. It was the first time a Navajo basket weaver portrayed images a Navajo ceremony on a basket. A result of Mary’s creativity and courage, this basket marked the beginning of a new Navajo art form.

Mary Holiday Black was born around 1936 on Douglas Mesa, a remote area on the Navajo Nation in southeastern Utah. A member of the Tódích'íi'nii (Bitterwater) clan and born for the Táchii’nii (Red Streak) clan, her father was a medicine man and her mother was a rug weaver. When she was 11, she learned how to weave ceremonial Navajo baskets, or ts’aa’. At the time, few Navajo women were weaving baskets. In fact, many anthropologists believed the practice had disappeared, but the women in the isolated community of Douglas Mesa kept the knowledge and tradition alive.

With encouragement from local trading post owners seeking new products for the burgeoning Indian art market, Mary began to experiment with the technical aspects of basket making in the 1970s. She gathered and processed natural vegetal dies to give her baskets more traditional colors. She experimented with scale, weaving sets of miniature baskets as well as huge baskets much too large for ceremonial use. Fire Dance basket by Mary Holiday Black, ET513.96. Photo: Kirstin Roper © NHMU
By the 1980s, Mary began to experiment with the design of the ceremonial basket. First, she incorporated geometric designs from Navajo rugs into her baskets. Then, like Navajo rug weavers decades before, she began to explore ceremonial images inspired by the sand paintings created by Navajo medicine men during ceremonies. Mary, and her daughter, Sally Black, were likely the first weavers to portray Holy beings, or Yé’ii, in their baskets. And with the Fire Dance basket, the depiction of a ceremony itself, Mary launched a new art form that created space for weavers to create their own original designs.

As other Navajo basket weavers followed Mary into this new artistic space, their creativity and innovation led to an explosion of entirely new basket designs. Contemporary Navajo baskets can be loaded with dynamic imagery from Navajo stories, ceremonies, history, and daily life; feature dazzling geometric patterns inspired by stained glass, optical art, or dreams; or illustrate experiments with the technical aspects of weaving

Being a revolutionary, however, is not without its perils. Mary took a risk by stepping outside traditional boundaries to express herself artistically. The medicine men in Mary’s family and other neighbors in their traditional community were critical of altering the traditional ceremonial basket design. In particular, capturing ceremonial images on baskets—themselves objects at the center of ceremonies—made some in the Navajo community very uncomfortable. They worried harmful consequences would follow for the weavers and the community if weavers mishandled these powerful objects and images. Like many basket weavers, Mary participated in ceremonies to maintain balance with her surroundings and protect herself from harm.

Mary was both an agent of change and a keeper of tradition in Navajo culture. While it is easy to focus on the innovations of the weavers and their designs, the preservation of tradition is an equally important thread in the story of the revolution Mary launched. The images on the baskets are new, but the production of the baskets—from the gathering of the raw materials to the finish of the rim—follows ancient traditions imbued with meaning. Sandpainting basket by Mary Holiday Black, ET513.E-16. Photo: Kirstin Roper © NHMU
The new designs provide a new vehicle for sharing traditional stories and beliefs. Indeed, Mary spoke passionately of the baskets as a form of cultural preservation. By visually representing stories once shared orally only at certain times of year, the baskets help transmit Navajo beliefs and values within in the Navajo community as well as to wider audiences eager to learn about Navajo culture.

Mary also helped preserve Navajo basketry by teaching future weavers, including nine of her 11 children. In 1993, she received the Utah Governor’s Folk Art Award and in 1995 she was awarded the National Heritage Fellowship by the National Endowment for the Arts.  Mary’s artistic innovations created opportunities for other basket makers and encouraged them to find self-expression and economic opportunity in weaving baskets.

Many are grieving Mary Black’s passing—her children, grandchildren, and great-grandchildren; the Douglas Mesa community; and the many people she touched through the beauty of her own baskets and the artistic movement she launched. The Natural History Museum of Utah is honored to care for a number of Mary’s baskets, including the iconic Fire Dance basket, and to be able to share her enormous legacy with generations to come.

You can learn more about Mary Holiday Black and discover the stories, symbols, and history woven into nearly 50 contemporary Navajo baskets with the Museum’s Navajo Basket Explorer.

Lisa Thompson is an exhibit developer and interpretive planner at the Natural History Museum of Utah, a part of the University of Utah in Salt Lake City. Our mission is to illuminate the natural world and the place of humans within it. In addition to housing outstanding exhibits for the public, NHMU is a research museum. Learn more.