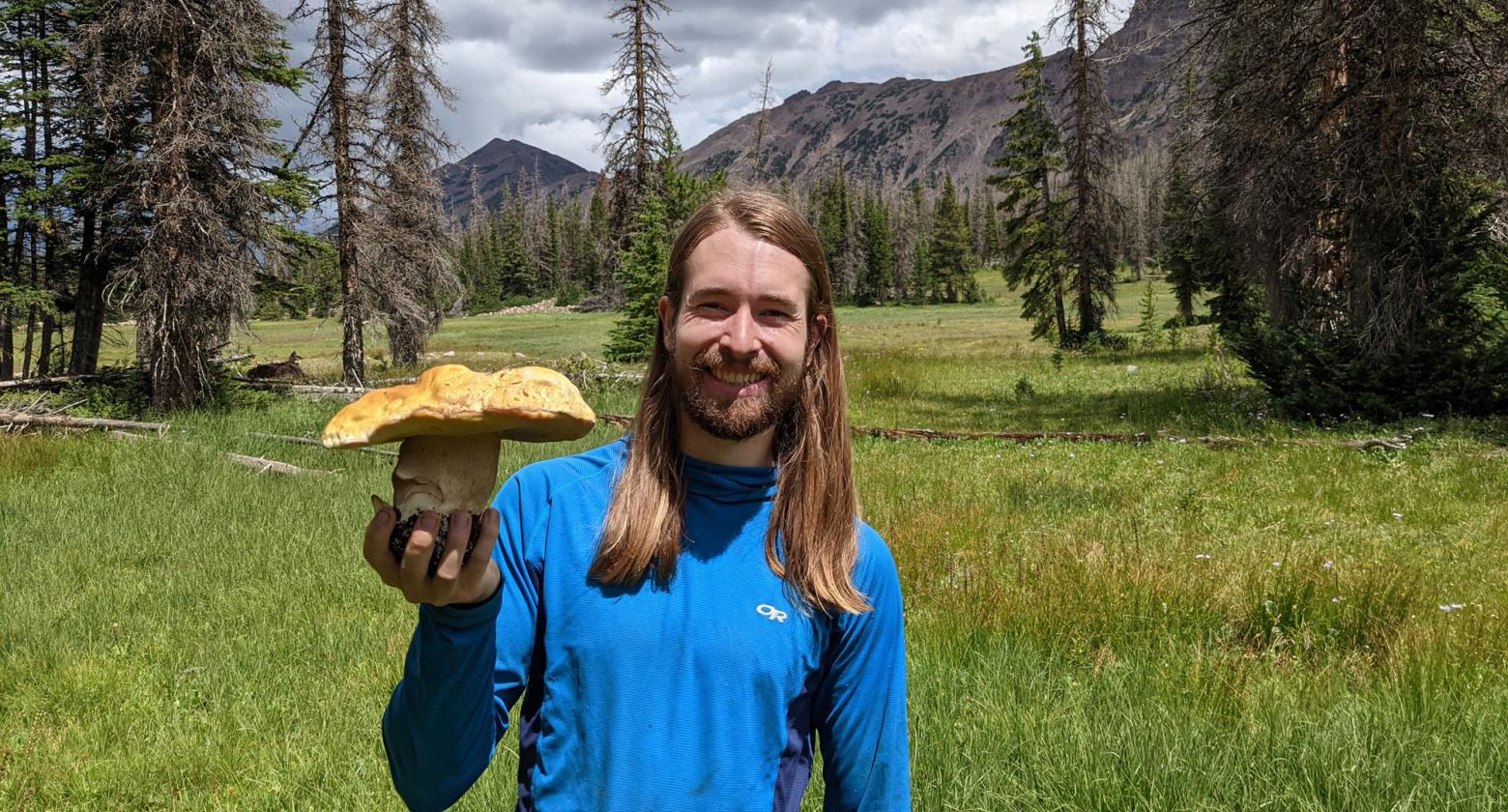 The Dentinger Lab at the Natural History Museum of Utah has published a provocative new paper in the journal New Phytologist that describes their work with the much beloved mushroom, Boletus edulis, better known by gastronomers worldwide as the porcini. In the paper, Keaton Tremble and Bryn Dentinger, PhD, present a first-of-its-kind genetic survey of porcini mushrooms across the Northern Hemisphere. By evaluating the genetic code of these samples from across the globe, they learned that these delicious fungi evolved in surprising ways – contrary to the expectations of many who might think that geographic isolation would be the primary driver for species diversity. In fact, there are regions in the world where porcini maintain their genetic distinctiveness in local ecological niches, even if they are not isolated geographically from other genetic lineages.

The French word terroir, made famous by viticulturalists, immediately comes to mind. Terroir describes all of the local factors such as soil types, amount of sunshine, degree of slope, microclimate, soil microorganisms, etc. that make each plot of land yield distinctive wines. It is a celebration of the local ecology and its impact on the vines, grapes, and finished product. Tremble and Dentinger’s new study offers mushroom hunters tantalizing data to claim that the porcinis in their secret forest patch express the qualities of their terroir in the same way as the best wines in the world.

But this isn’t the point of the study. With the advent of genetic sequencing, most mycology genetic studies have focused on describing the unique characteristics of fungi in a small geographic area. Tremble and Dentinger wanted to do something different. Rather than just comparing a group of mushrooms from Colorado to a group in California in order to call them different species, they wanted to better understand the global trends in how the genetic code was preserved or changed in porcini. “Our study is important because it goes beyond overly simplistic sampling method used in the past,” states Dentinger.

What they found is that porcini have evolved in different, but clearly recognizable ways across the globe. “In North America, there is a strong stratification of separate genetic populations in local areas, despite the fact that they aren’t reproductively isolated,” explains Tremble. “Yet in Europe, there is one lineage that dominates from Spain to Georgia to Scandanavia.” Evolutionary biologists typically believe that there is one evolutionary strategy that governs the speciation process for a particular organism, but Tremble and Dentinger have showed that porcini actually exhibit multiple, divergent strategies. In fact, this is the first genetic study in any organism to show such a result at the global scale.

A related, significant result is a refutation of the traditional notion that isolation is the main way that species develop their uniqueness. As the Encyclopedia of Ecology (Second Edition – 2019) proudly states: “all evolutionary biologists agree that geographic isolation is a common, if not the most common, mechanism by which new species arise (Futuyma, 2013).”

“This paper shows that you don’t need isolation for genetic divergence,” Tremble asserts. “The force of ecological adaptation is so strong in Boletus edulis that even though you can disperse spores basically anywhere, there is strong selection to adapt to specific environments.”

It’s an exciting time to be a mycologist. Not only is the fungal kingdom barely explored and described, but DNA sequencing technology has introduced a seismic shift in how mycologists classify fungi. For millennia, humans have identified mushrooms that are good to eat from ones that are poisonous based on how they looked, or their phenotype. But phenotypes can be deceiving – consider a brother and sister who have different hair color, different nose shapes, etc. They are still more genetically similar to each other than to other people in the population. Thus, genetic similarities are considered the true marker of different species, bucking the trend of mushroom identification that stretches back to the beginning of humanity.

On top of this, let’s remember that mushrooms are just the reproductive structure of the main organism, called a mycelium (see the illustration below, “The Basics of Fungi”). Like icebergs, mycelia only show us the tip of themselves, while the massive fungal body lives underground, bound up with the roots of trees. Boletus edulisspreads geographically thanks to the tiny spores released from the porcini mushrooms, borne on the wind, mammals, and even flies. Thus, biologists are tempted to believe that in whatever geographic area where spores can fly, a species will be defined by the genetic mixing within this geographic space.

In North America, different genetic lineages exist side-by-side, and despite genetic evidence of intermixing, local ecological factors played the bigger role in maintaining the distinction of these lineages. “Utah happens to be one of the areas where two distinct lineages live,” notes Dentinger. What these lineages show is that the local ecology is a stronger factor in maintaining their genetic distinctiveness than genetic flow from other lineages. This illustration is a little misleading because mycelia are often much larger than any of their mushrooms that appear on the surface of the soil or tree stumps. Fungi can grow up to a half a mile of the thread-like hyphae a day. In fact, the largest known organism on the planet is the Humongous Fungus (Armillaria ostoyae) in The Malheur National Forest, Oregon, measuring 2,385 acres (3.72 square miles) in area. It is estimated to be between 1900 and 8650 years old. Illustration courtesy FoodPrint.org.

The Marvels of the Dried Porcini

The secret to their study resides deep in the heart of natural history museums: collections of mushrooms. Tremble is a PhD candidate in the School of Biological Sciences, defending his thesis in spring 2023 to receive his degree in Evolutionary Biology. He made a fortuitous choice when working with Dentinger as his advisor – as the Curator of Mycology at NHMU, Dentinger has established NHMU’s Genomics Lab to be able to analyze DNA quickly and efficiently. More importantly for this study, Dentinger’s professional contacts at natural history museums around the world helped Tremble access the 160 samples that would have been near impossible to collect otherwise.

“You have to rely on opportunistic encounters in nature to collect a living sample,” Dentinger explains. “This is fundamentally different from working with plants, which are there in every season, and animals, which you can bait.” Thus, it would have taken an incredible amount of logistics, timing, and luck to find, correctly identify, and ship 160 different samples across the Northern Hemisphere back to the lab at NHMU.

Instead, “our study was all possible thanks to fungaria,” Dentinger states, referring to the name for fungus collections in museums. They plumbed the depths of NHMU’s fungarium and reached out to collaborators around the globe.

“Without the accumulated field work by 80 different people, this would not have been possible,” Tremble notes. All of the samples were dried porcini mushrooms, stable and ready for Tremble to extract their DNA. Since Boletus edulismycelia have a surprisingly long lifespan (estimated to be up to 45 years), they used samples only dating back to 1950 to make sure that the study kept to just a few generations.

Tremble used sophisticated software to run statistical analyses on these samples. He genotyped 792,923 SNPs (pronounced “snips,” short for single nucleotide polymorphisms), which are the individual ways in which the 160 porcini genomes differed from one another. In order to classify major lineages, he filtered out the SNPs that were only present in one sample (which would be considered just a “family unit” or individual variant) so that he could instead observe only major differences between genomes. In the end, Tremble identified 6 major lineages.

Feeding his data into mathematical models, Tremble uncovered a complex web of genomic mixing, where lineages remained distinct despite evidence that other lineages had mixed with them. Their modeling and geographical sample data showed that this ability to remain distinct was due to environmental adaptation, not physical isolation.

Tremble and Dentinger take a decidedly agnostic approach to the question of whether they should be identifying these 6 distinct lineages as “species.” They abstain from doing so in their paper because they want to focus on the genetic data and the larger questions related to strategies in evolutionary biology. Plus, that species discussion is one vexed conversation.

“There is no formal process for defining a species,” Tremble notes, “it’s an ongoing debate. We didn’t want to call them species or subspecies because it automatically implies that they are separately evolving groups, which they definitely aren’t.” They decided to call them lineages because this term is genetically resolvable, that is, lineages can be quantifiably distinguished from one another using statistical genetic approaches. But that doesn’t mean they don’t want to tackle the taxonomy. “This is going to be a forthcoming article in a different journal,” Dentinger says. The world of fungi never experienced the Victorian era-explosion of identifying and naming species that happened with animals and plants. With only an estimated 5% of fungi diversity being identified, naming and taxonomy must happen, if only to help mycologists speak about their subject.

However the species-subspecies taxonomy for Boletus edulis shakes out, Dentinger assures us of one thing: “Terroir is more important than people thought.”

So, find a mushroom hunter and get on his or her good side in order to find the porcini best adapted to your palate.