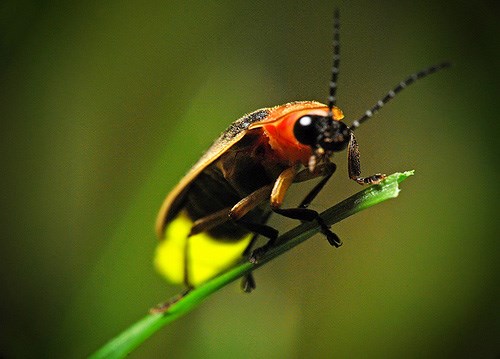 Did you know there are fireflies in Utah, New Mexico, and other western states?

For many years, the Natural History Museum of Utah's entomologist Christy Bills had heard anecdotes from Utahns about occasional firefly sightings. The purpose of this project is to continue to find fireflies in the western U.S. in unexpected places.
The Natural History Museum of Utah has partnered with scientists at BYU to track their populations throughout Utah, using the help of citizen scientists. Geneticists at BYU are researching the relationships of various species in Utah and how they, separated by hundreds of miles and geographical barriers, relate to the Eastern U.S. populations.
Photo credit to GeoEric from geocaching.com

Started in 2014 as the Utah Firefly Citizen Science Project, the project expanded to other western states in 2019. Since then, the Western Firefly Project has confirmed new populations of fireflies in Utah, New Mexico, Wyoming, Idaho, Nevada, and Colorado. View a map of recorded firefly sightings, which continues to grow thanks to participation from everyday citizen scientists. You can also read more about this project in various articles on our blog.

Fireflies, also called lightning bugs, are beetles. Both males and females light up as a way to attract mates and deter predators. The oldest specimen in Utah is housed at the Natural History Museum of Utah, collected in 1929. Fireflies are not new to Utah, but we have much to learn about them. They are most often found in wet habitats from late May to early July (although outside Utah, populations might surprise us!) and start flashing around at dusk or sometimes later, near 10 pm.

Today, research benefits tremendously from the discoveries and contributions of Citizen Scientists around the world. The Natural History Museum of Utah currently hosts several Citizen Science projects, and we need your help! If you have observed fireflies in Utah, Idaho, Wyoming, Colorado, New Mexico, Arizona, or Oregon, follow this link to submit your sightings.

As you conduct your own search for fireflies in Utah in mid-May through late June, refer to the example image below showing what to look for as prime firefly habitat: a wet meadow. image of a wet field with tall green grass

If you would like to contribute firefly data from eastern U.S. states, submit your firefly sightings to Firefly Watch.