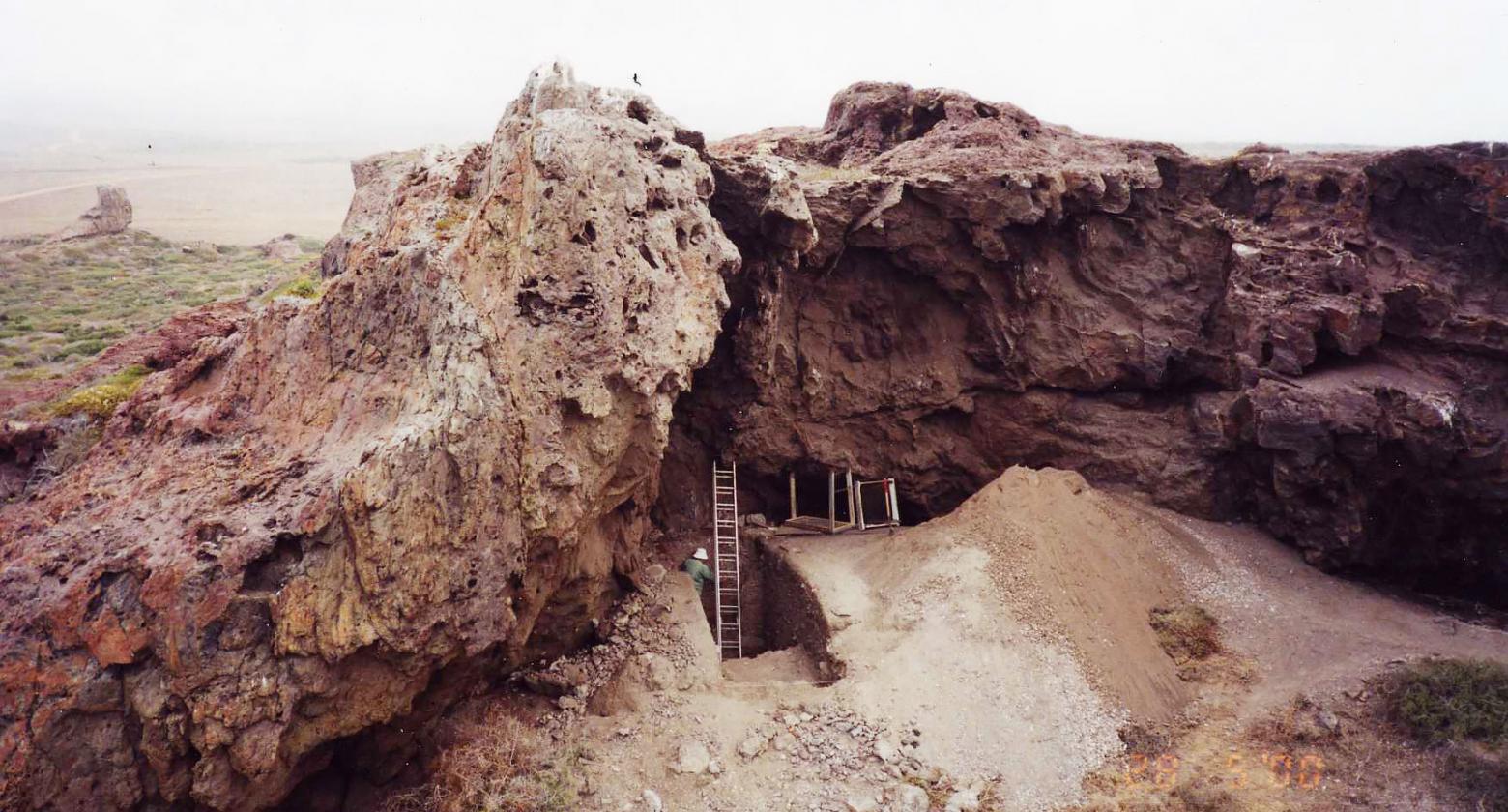 The rock shelter Abrigo de los Escorpiones provided favored perches for raptors and a sheltered campsite for human foragers across the millennia. Photo by Ruth Gruhn.

By Lisa Potter, research communications specialist at the University of Utah

The El Niño/Southern Oscillation (ENSO) is a global climate phenomenon most famous for the El Niño phase characterized by warm sea surface temperatures in the eastern Pacific Ocean, intense winter storms and high precipitation. El Niño impacts plants, animals and people around the world by devastating Pacific fisheries, sparking droughts in some parts of the world and causing massive flooding in others.

Many models predict that climate change will fuel stronger and more frequent El Niño events. However, our knowledge of ENSO and its influence on ecosystems from historic or instrumental records only extends back about 200 years, making it difficult to understand what the long-term future will hold for an El Niño-dominant world.

A team of researchers led by the University of Utah created a fine-grained analysis of El Niño’s impact on animal communities spanning the past 12,000 years. The study was published in the journal Science on Sept. 8, 2022.

In the new study, the authors leveraged a coastal rockshelter site called Abrigo de los Escorpiones (Escorpiones), one of the largest and best-dated collections of vertebrate bones deposited by humans and raptors on the Pacific coast of North America. The site was excavated by Ruth Gruhn and Alan Bryan of the University of Alberta between 2000-2004. For this study, the authors focused on the fish and bird fauna, identifying species from small fragmentary pieces of bone. They then compared the faunal assemblages to the sediment layers of Ecuador’s Lake Pallcacocha, one of the most widely applied, continuous records of prehistoric El Niño events.

If strong El Niño events increase in the future, as many climate models now project, this ecological threshold suggests that ENSO will play an increasingly important role in controlling the structure of future eastern Pacific terrestrial and marine ecosystems, and the Earth’s biosphere more broadly.

“Our limited window of experience with El Niño leads us to think that more El Niño equals more variability, more change, more shifts. But our perceptions are based solely on a very narrow window of time in the modern era that on the big scheme of things, is a period when El Niño is very uncommon,” said Jack Broughton, professor of anthropology at the University of Utah and senior author of the study. “We’ve shown that in the big picture, lots of El Niño equals lots of stability. For eastern Pacific coastal communities, this means a stable stretch of unproductive marine ecosystems. And that has huge implications for so many different aspects of life on Earth.”

In non-El Niño years, the eastern Pacific coast teems with life due to cold, nutrient-rich water that upwells to the surface and sustains the plankton communities upon which marine life is based. During El Niño, the sea surface becomes much warmer, causing plankton densities to plummet. This ripples through the upper trophic levels—the small fishes that eat the plankton, the bigger fishes that eat the small fishes, the birds that eat the fishes, the marine mammals that eat the birds and the fishes. In contrast, El Niño causes heavy rains in the region’s terrestrial ecosystems, producing a boon of productivity for land-based resources. This agrees with a 2015 study where Broughton and collaborators found that rabbit populations were controlled strongly by El Niño variation, based on data from Escorpiones and Lake Pallcacocha.

Along with implications for the future, the findings illuminate important moments in our past, including human migration into the Americas, the variable human use of coastal and interior habitats and the extinction of the flightless duck Chendytes.

A rockshelter and a lakebed: extraordinary archives

Rain and water from the surrounding highlands have flowed into Lake Pallcacocha for the last 12,000 years. During big rainstorms that are signatures of El Niño events, a huge volume of material pours into the lake and settles onto the bottom in a thick, light-colored layer. In the years with fewer El Niño events, the sediment settles into much thinner, darker layers. Earlier work radiocarbon-dated each layer and divided them into hundred-year increments. The thick bands correlated precisely with instrumental and historic records of strong El Niño events over the past ~200 years.

The Escorpiones rockshelter, located on the northwest coast of Baja California, Mexico, contains a 26-feet-(8-meter-)-deep deposit of discarded shells, animal bones and archaeological artifacts, with 97 radiocarbon dates that reveal a 12,000-year chronological history of human and raptor deposition. This study identified 18,623 marine fish and marine and terrestrial bird specimens that represented 132 species, painstaking work that was carried out over the past 14 years. The researchers organized the specimens into 100-year increments to align with the paleo-ENSO record. Photos by Isaac Hart and Jack Broughton
Pallcacocha revealed a near absence of ENSO between 11,000 and 7,000 years ago with El Niño frequency increasing dramatically between 7,000 to 5,000 years ago. In the Escorpiones record, bird and fish species were extremely variable before ENSO emerged. When El Niño entered the high frequency phase, the animal communities restructured dramatically, then remained relatively stable. Marine birds, such as common murres and shearwaters, and fish species associated with cold waters, such as rockfish and kelp bass, were in high abundance when El Niño events were rare but declined dramatically after the high frequency phase began. Additionally, terrestrial bird species exploded during the strong El Niño years.

“This magic number is five strong El Niño events per century—we didn’t just eyeball it. It’s based on statistical tests that show us that entire faunas are changing in this way, not just a few isolated species,” Broughton said.

This ecological tipping point has wide ranging implications, including for our understanding of human colonization of the Americas. The findings support the “Kelp Highway Hypothesis” that claims early settlers would have followed healthy kelp forests from northeast Asia, across the Bering Strait and into the Americas. According to the Escorpiones record, the eastern Pacific coast had El Niño-free, nutrient-rich kelp forests around 12,000 years ago when humans are proposed to have made the journey.

The study also shows that past peoples were sensitive to these changes, spending far more time at the coast—at Escorpiones—during those periods when El Niño was infrequent and the marine environment was highly productive. They moved away from the site, presumably into the interior, during El Niño years when terrestrial habitats flourished.

“This record provides a glimpse of how past populations adapted to specific challenges caused by climate change, in this case by migrating to more productive environments when coastal ecosystems declined,” said Brian Codding, professor of anthropology at the U and co-author on the study. The record of human site use frequency was based on trends in the frequencies of artifacts recovered per century.

The findings also suggest El Niño played a role in the extinction of Chendytes, a goose-sized flightless duck that was presumed to have been overhunted by humans. Escorpiones has provided the most detailed account of the duck’s history and suggests that while people had been eating it for at least 6,000 years, it only disappeared right around the period when El Niño frequencies are increasing dramatically, and when there were lots of other changes in the marine ecology, including depressions of other sea birds.

“The detailed record from Escorpiones illustrates the importance of environmental change in driving the extinction of Chendytes, which endured millennia of human predation only to disappear after El Niño events became more frequent,” said Tyler Faith, associate professor of anthropology at the U, curator at the Natural History Museum of Utah and co-author on the study.

There are some limitations to the study. The lake only records moderate or strong El Niño events, so the authors could not evaluate whether weak El Niño events impacted the faunas. Further work evaluating patterns between weak and strong El Niño events may clarify this issue. To further understand these patterns, the researchers are currently analyzing how mammals such as seals, sea otters and sea lions were impacted by El Niño and whether additional El Niño threshold effects at the millennial scale may be present.

There are many other factors influencing the marine and terrestrial ecosystems in the study area, including other climatic systems and processes. The authors emphasize this—but it does appear that El Niño controls the marine/terrestrial ecosystems when it happens a lot. During phases when ENSO is quiet, other oceanographic or climate systems (such as the Pacific Decadal Oscillation, North American Monsoon) have important effects.

“El Niño events have the most controlling effect on these ecosystems when they occur beyond the critical threshold of five times per century,” said Broughton. “If strong El Niño events increase in the future, our analysis suggests that terrestrial productivity will increase, but eastern Pacific marine ecosystems will be forced back to a more stable but less productive state.”

This article was written by Lisa Potter, research communications specialist at the University of Utah. It first appeared on @TheU and can be seen in its original posting here.