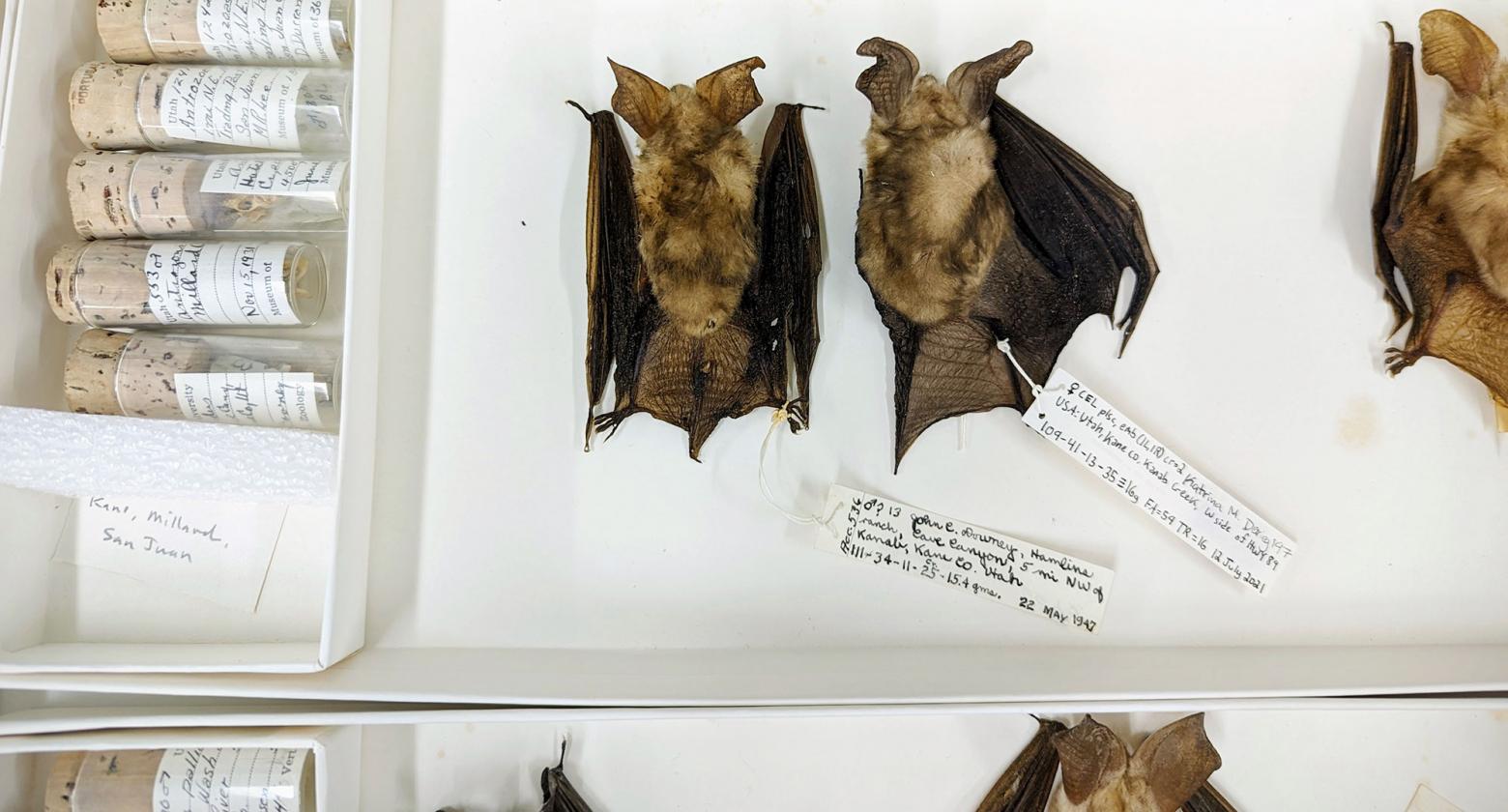 Learn more about Katrina's work at NHMU during Behind the Scenes November 12-13.

Every year during the last week of October leading up to Halloween, bat researchers, conservationists, and enthusiasts celebrate Bat Week. Bats have historically been the star of spooky books, movies, and decorations so it is the perfect season to celebrate and bring awareness to these fascinating and diverse creatures. However, due to their misrepresentation in terrifying lore and literature, bats have become misunderstood and feared by many.

While bats play a key role in many ecosystems as pollinators, seed dispersers, and pest managers (a single bat can eat thousands of bugs in one night), it is true that bats may also be unique in their ability to carry and spread disease. During the early days of the COVID-19 Pandemic scientists were scrambling to figure out where this deadly pathogen came from and bats were a prime suspect. It has long been known that bats carry different coronavirus strains, but no one knew whether or not bats were acting as a reservoir for SARS-CoV-2. This big blind spot was due to the relative lack of recent natural history records of bats in central Asia, the epicenter of COVID-19. In response, scientists began frantically trying to catch bats to screen for viruses, but it was too little too late and it is apparent we will never have the full picture of how long SARS-CoV-2 may have been in wild bat populations or how it evolved to infect humans.

Discovering emerging diseases is just one way to leverage the resources available in natural history museum collections (read more about the role of museums in disease research). These collections are a time machine that allows us to study the past, compare it to the present, and anticipate the future of the natural world. Without documenting the biodiversity of a certain place at a certain time, our ability to understand the world around us is limited. I have carried this philosophy with me throughout my career as a mammalogist, but it became particularly relevant as the world was grappling with the unknown. As the current steward of the Vertebrate Zoology collections at NHMU, I act on this philosophy by documenting and preserving the biodiversity of the state of Utah. Drawers of big brown bat (Eptesicus fuscus). ©NHMU
The Vertebrate Zoology collection at NHMU holds 1,435 bat specimens representing 83 species from around the world collected between the years of 1919 and 2022. While this may sound like a lot, in the context of the nearly 45,000 mammal specimens in our collection it means bats are underrepresented. That is about 14 bats from each year on average. Considering there are 21 bat species in Utah, this collection is not even close to accurately representing bat populations in Utah over time. Moreover, only 66 of these bats were collected after the year 2000. The lack of recent specimens over the past 20 years is truly alarming given the substantial environmental change our planet has experienced during this time. We may never fully understand the impact of this change on local bat species without specimens representing this period of time. Unfortunately, this is a common trend in natural history collections everywhere and there are a few reasons museums lack ample contemporary bat samples:

With these challenges in mind, I set out for my first bat collecting trip in Utah in July of 2021. My crew and I went to Kanab Creek in southern Utah and found the perfect site. The creek had some water in it and was bordered by cliffs with a bridge nearby, both of which are prime structures for bats to roost. We set up two nets: one across the creek and one across the nearby arroyo. As the sun was setting, we noticed the dark fluttering shapes begin to emerge. The first bat we caught was a canyon bat (Parastrellus hesperus). This species is usually the first to fly and will sometimes even fly before the sun has set, so if you see bats before it is dark, chances are it’s a canyon bat. We frustratedly watched many similarly sized bats avoid our net before we eventually caught a much larger bat: the Pallid bat (Antrozous pallidus). These large white bats are fierce predators, preying on large bugs like scorpions, moths, and centipedes. Eventually we caught another large bat, the big brown bat (Eptesicus fuscus). Pallid bat (Antrozous pallidus). ©NHMU
As the night went on, we continued to catch more pallid and big brown bats. We kept two of each species and released the remaining bats. Each bat (5 total) we collected was examined for parasites with several having batflies, which are wingless parasitic flies that specialize on bats. We then prepared each one as a voucher to be deposited in our collection. For each bat, we preserved liver, lung, and blood samples. These tissue samples are the prime resource for disease screening. Lastly, we examined the intestines to look for parasites and found one of the pallid bats was infected with roundworms, which are parasitic nematodes.

Eventually we closed the nets at midnight and concluded our survey. These 5 bats are now specimens in NHMU’s Vertebrate Zoology collection and their associated data are publicly available in the museum database (click to view specimen records). These specimens exist as the physical evidence that these individuals occurred at a certain place and time and they are preserved in perpetuity for scientists today and on into the future. Five bat specimens collected at Kanab Creek in July 2021. ©NHMU
You may be thinking, “why can’t you just take photos and let all of them go?” and while photo vouchers are a valid way of documenting species occurrence, one of the most fundamental features of a scientific study is reproducibility. It is important that a study is thorough and practical so that other scientists can conduct the same study and produce the same results, and a physical voucher that can be studied over and over again is the best way to do that. As we know, our planet is changing rapidly, so collecting as much information as possible about the natural world throughout time is absolutely essential to identifying patterns linked to these changes. By growing natural history collections, we are building infrastructure to study species, their parasites and pathogens, how they have evolved in the past, and how they may respond to changes in the future.

I am humbled by the idea that a scientist who hasn’t even been born yet may use these bat specimens with their associated tissues, parasites, and data to do research well into the future. Each specimen tells a story, so I am happy to celebrate bat week by sharing the story of these 5 bats which is merely an anecdote in NHMU’s rich past, present, and future.

Katrina Derieg is the vertebrate biology collections manager at NHMU. Her research is focused on the ecology and evolution of woodrats (aka packrats) across the southwest and she uses museum specimens to answer a multitude of questions involving these critters. Katrina cares for and grows NHMU's vertebrate collection as an important resource for researchers all across the globe, supporting NHMU's mission to illuminate the natural world and the place of humans within it. In addition to housing outstanding exhibits for the public, NHMU is a research museum. Learn more.