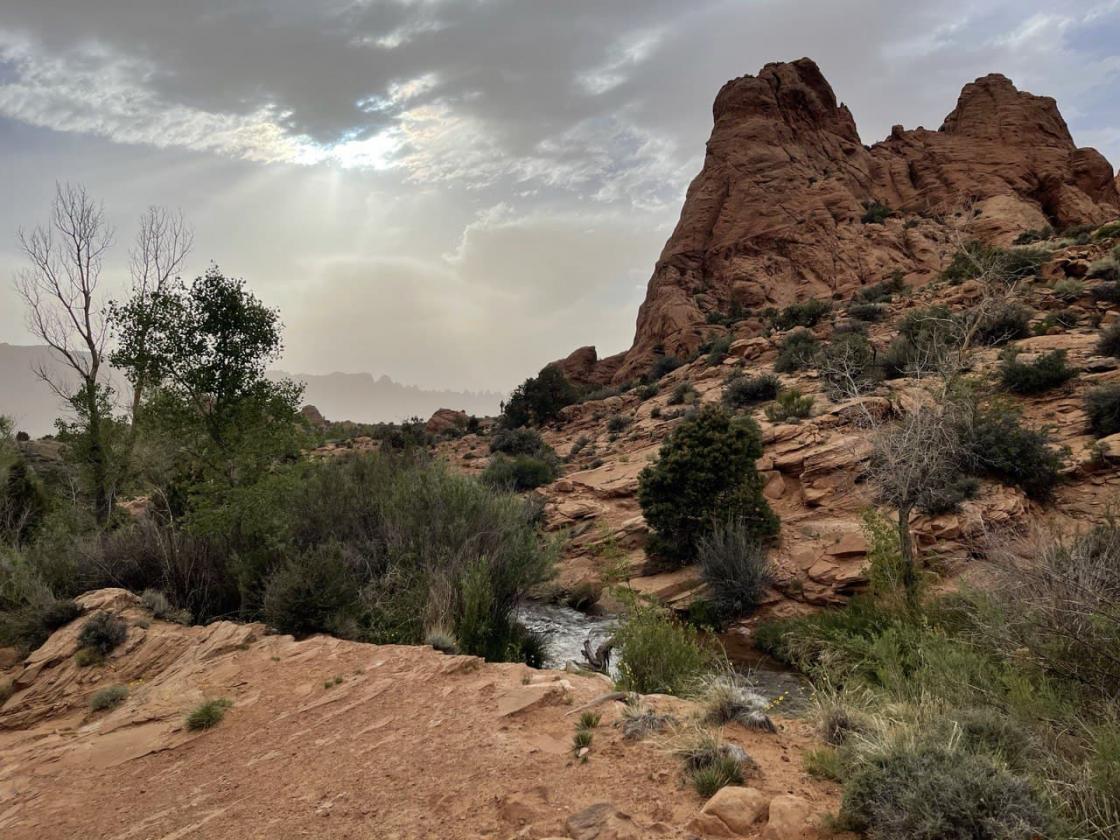 From top to bottom, from the western desert to the eastern slickrock country, Utah is filled with natural wonders. Caves and mountains, stunning fossils and amazing artifacts made by Native Americans, geologic curiosities and lands that beckon the adventurous, there is so much to discover. But what makes Utah so rich in natural history wonders?

Utah's geology has a great deal to do with our state's unique character. Our state is a place where millions upon millions of years of Earth history are visible. At places like Red Canyon Overlook in Daggett County, you can see more than 600 million years of Earth's history exposed in the canyon walls. If you know what to look for, you can see rock layers that pre-date the first animals as well as rocks laid down during the heyday of the dinosaurs - stacks of ancient sediment deposited by prehistoric oceans, streams, and deserts at different times, strata that were eventually pushed up by the slow grind of mountain-building and carved out by moving water. It's a good spot to get some idea of just how deep our state's history goes, and how ancient changes created our modern world.

That same interplay between ancient and modern is on full display at Parowan Gap in Iron County. The exposed rocks along this three-mile-long gap in the stone was origionally laid down about 200 million years ago, when broad sand dunes covered much of prehistoric Utah. Those layers were buried for millions of years, but were later brought to the surface during a long-lasting event called the Sevier Orogeny that created a great deal of Utah's distinctive topography. Later still, by about 5,000 years ago, Native Americans were passing through this area - and they left their mark on the stone. In fact, the ancient Jurassic rocks were an excellent canvas. The remnants of the ancient sand dunes tend to stain when exposed - a dark veneer called desert varnish - and Native Americans of different cultural groups created petroglyphs and other rock art along Parowan Gap, their history and Earth's history intertwined.

The connection between Utah's natural history and people can be seen in other places, too. Nine Mile Canyon, in Emery County, is home to the largest accumulation of Native American rock art in North America. Washington County's Confluence Park, likewise, has a history that includes Native American peoples as well as connections to early European explorations of what would become Utah, multiple layers of history overlain on each other in this place.

And, of course, part of what's made Utah's natural history so famous is its dinosaurs. Some of our state's great fossil sites - such as Cleveland-Lloyd Dinosaur Quarry in Emery County - preserve vast accumulations of dinosaur remains that tell us something about the prehistoric environments that Allosaurus and Stegosaurus used to roam. Others represent dinosaurs not found anywhere else. Comb Ridge in San Juan County preserved the remains of a long-necked, awkward-looking dinosaur named Seitaad in Early Jurassic stone, while Utahraptor - our state dinosaur - was found in the Early Cretaceous strata just outside of Moab in Grand County. The fact that more than half of Utah's land area is protected as federal land has helped to preserve these amazing and inspiring places.

Naturally, Utah's beauty isn't only a product of the past. From the Tushar Mountains in Beaver County to Antelope Island in Davis County, just 45 minutes outside Salt Lake City, Utah is home to an impressive array of wildlife. In fact, some places within our state, such as Fish Springs National Wildlife Refuge in Juab County, are critical stopover points for migratory birds. The geological changes that allowed spring water to burble up from below and create a wetland that birds rely on as they make their long journeys north and south along the great Pacific Flyway.

In every corner of the state, there is something wonderful that reminds us of our connection to nature. The geologic backstory, the diversity of ancient life, the enduring history of the Native American peoples, and the stunning wildlife are all facets of our state's story, and there is still so much to explore and understand. Who knows what you might discover?

The Ecological Legacy of Bears Ears